Zelenskyy touts trip as sign of American commitment by Compiled by Democrat-Gazette Staff From Wire Reports | May 15, 2022 at 8:53 a.m. 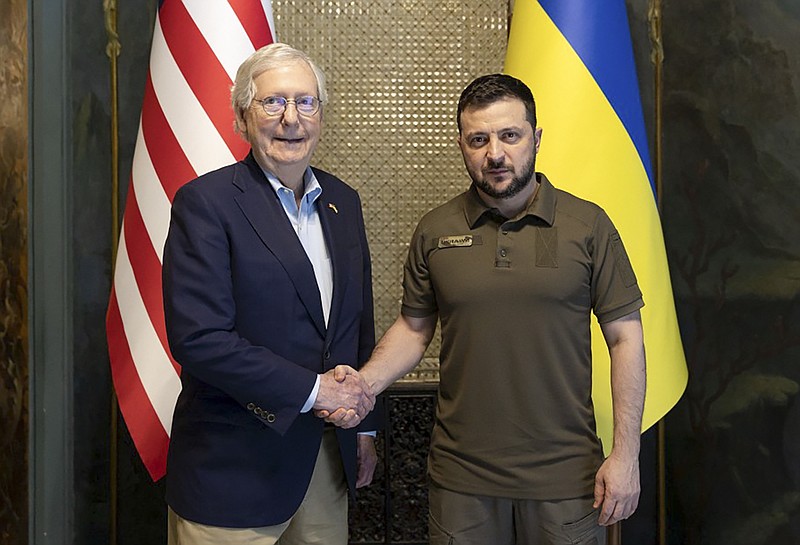 WASHINGTON -- Senate Republican leader Mitch McConnell and a delegation of GOP senators met with Ukrainian President Volodymyr Zelenskyy in Kyiv during an unannounced visit Saturday, delivering the latest show of American solidarity with the country at war with Russia.

A video posted on Zelenskyy's Telegram account showed McConnell, R-Ky., and Sens. Susan Collins, R-Maine, John Barrasso, R-Wyo., and John Cornyn, R-Texas, greeting him in the capital. Zelenskyy, in an Instagram post, called the visit "a strong signal of bipartisan support for Ukraine from the United States Congress and the American people."

Later, in his nightly video address, Zelenskyy said he believed the senators' trip showed "the strong connection between the Ukrainian and American people. We discussed various areas of support for our country, including defense and finance, as well as strengthening sanctions against Russia."

The trip came at a time when the Senate is working to approve a nearly $40 billion package for Ukraine, a substantial infusion of support that will push American aid to the region well above $50 billion. The measure includes $6 billion for Ukraine for intelligence, equipment and training for its forces, plus $4 billion in financing to help Ukraine and NATO allies build up their militaries.

Passage was delayed Thursday by Sen. Rand Paul, R-Ky., who demanded the inclusion of a proposal to have an inspector general scrutinize the new spending. But final approval is not in doubt and could come in the week ahead, reflecting overwhelming support in Congress for replenishing the Ukrainian war effort.

"They're only asking for the resources they need to defend themselves against this deranged invasion," McConnell said last week of the Ukrainians. "And they need this help right now."

It was the second high-profile congressional delegation to stop in Ukraine in as many weeks. House Speaker Nancy Pelosi, D-Calif., visited May 1 with a group of House Democrats and promised Zelenskyy that the United States will "be there for you until the fight is done."

Meanwhile, the Biden administration is urging international banks not to help Russia evade sanctions, warning that firms risk losing access to markets in the United States and Europe if they support Russian businesses or oligarchs that are facing financial restrictions as a result of the war in Ukraine.

The admonition by a senior Treasury official highlights U.S. efforts to exert pressure on the Russian economy through U.S. financial power and underscores the broad view that the Biden administration is taking of its ability to enforce sanctions as it looks to isolate Russia from the global economy.

In private meetings Friday with representatives of international banks in New York, Adewale Adeyemo, the deputy Treasury secretary, laid out the consequences of helping Russians flout sanctions. He pointed to the "material support provision" that dictates that even if a financial institution is based in a country that has not imposed sanctions on Russia, the company can still face consequences for violating U.S. or European restrictions, including being cut off from those financial systems.

"If you provide material support to a sanctioned individual or a sanctioned entity, we can extend our sanctions regime to you and use our tools to go after you as well," Adeyemo said Friday. "I want to make that very clear to these institutions that are domiciled and other countries that may not have taken sanctions actions: that the United States and our allies and partners are prepared to act if they do things that violate our sanctions."

The Biden administration has placed sweeping restrictions on Russian financial institutions, oligarchs and its central bank. It has coordinated with allies in Europe and Asia to crack down on sanctions evasion; the direct warning to foreign banks was part of that effort.

Financial institutions from China, Brazil, Ireland, Japan and Canada were at the meeting, which was hosted by the Institute of International Bankers.

Adeyemo said U.S. banks had been careful to avoid violating U.S. sanctions, but that Russian individuals and businesses were looking to set up trusts and use proxies as workarounds. He also pointed to firms that might be providing support to sanctioned oligarchs who are trying to move their yachts to different ports to avoid seizure.

Most jurisdictions have been complying with the sanctions, but some, such as the United Arab Emirates, have continued to provide safe haven for Russian assets. The yachts of several Russian oligarchs have been docked in Dubai.

"You've seen a number of Russian yachts move from ports, countries that have extended sanctions to countries that haven't," Adeyemo said. "We want to make clear to people that if you're a financial institution, and you have a business that is a customer that is providing material support to one of these yachts, you, that business, could be subject to our material support provision."

Referring to his message to foreign banks, he added: "You need to make sure that not only are you making sure that you're watching flows into your financial institution, but you need to also help by reminding the businesses that you support that they, too, you don't want them to be providing material support to Russian oligarchs or Russian businesses as well."

Citigroup, the largest U.S. bank in Russia, with about 3,000 employees there, was in "active dialogue" to sell its Russian consumer and commercial-bank businesses, Jane Fraser, its CEO, told Bloomberg this month.

Citigroup trimmed its exposure in Russia to $7.9 billion in March, down from $9.8 billion at the end of last year, according to a filing. "This weaponization of financial services is a very, very big deal," Fraser said this month. She said she expected global capital flows to splinter as nations developed new financial systems to avoid being too reliant on Western firms.

Information for this article was contributed by The Associated Press and Alan Rappeport and Emily Flitter of The New York Times. 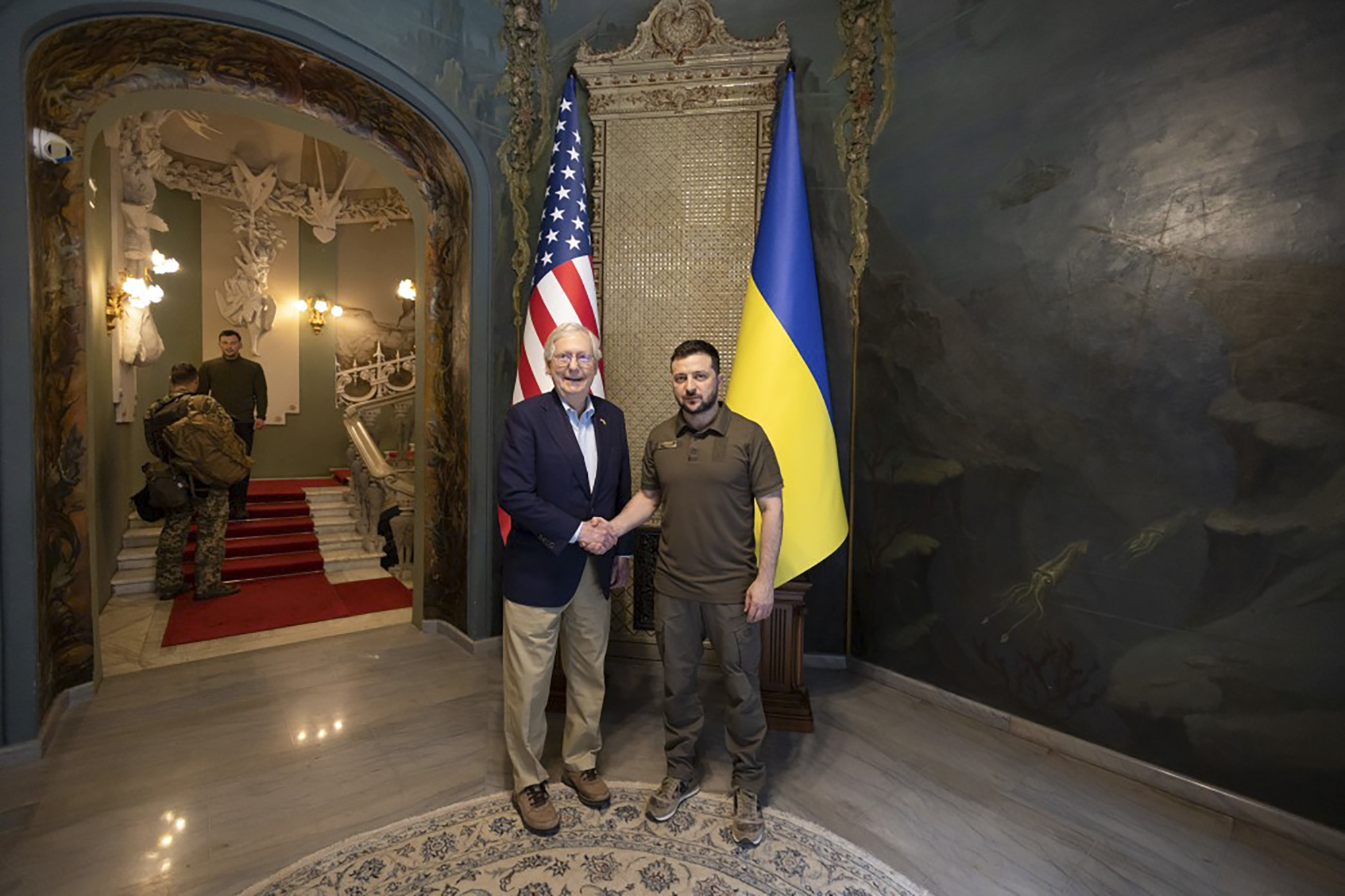 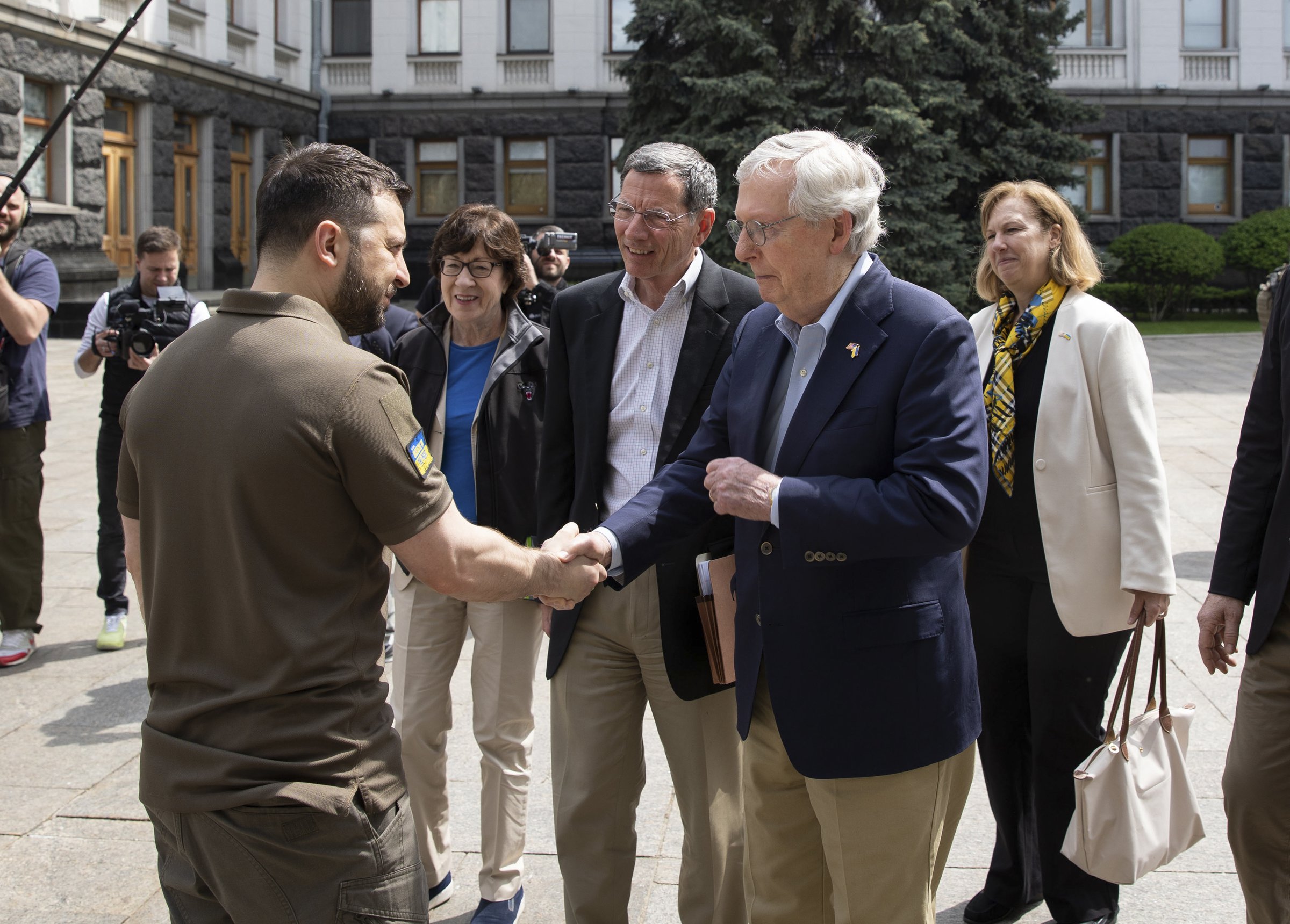 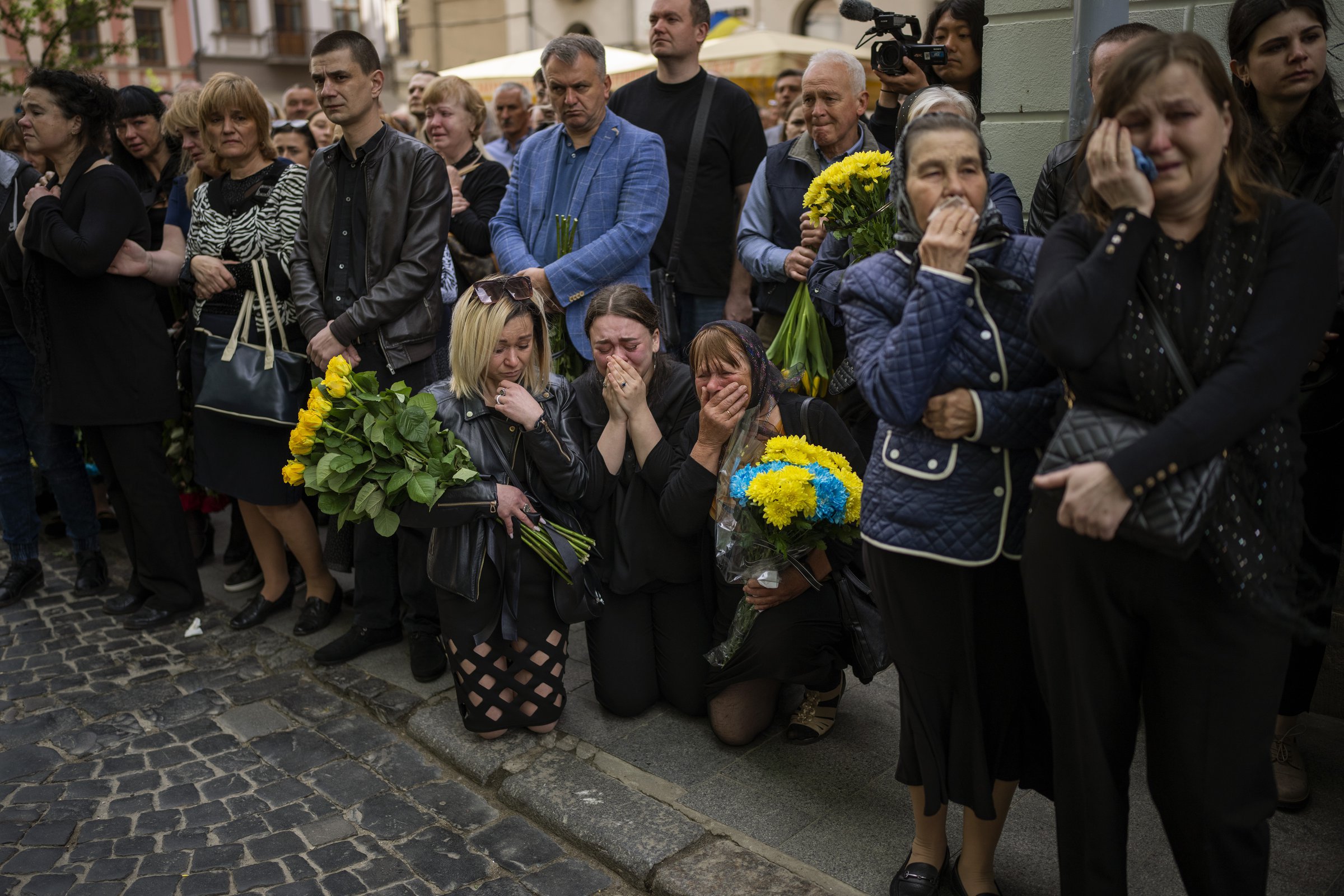 Relatives and friends react during the funeral of Melnyk Andriy, Shufryn Andriy and Ankratov Oleksandra, three Ukrainian military servicemen who were killed in the east of the country, Saturday in Lviv, Ukraine. (AP/Emilio Morenatti) 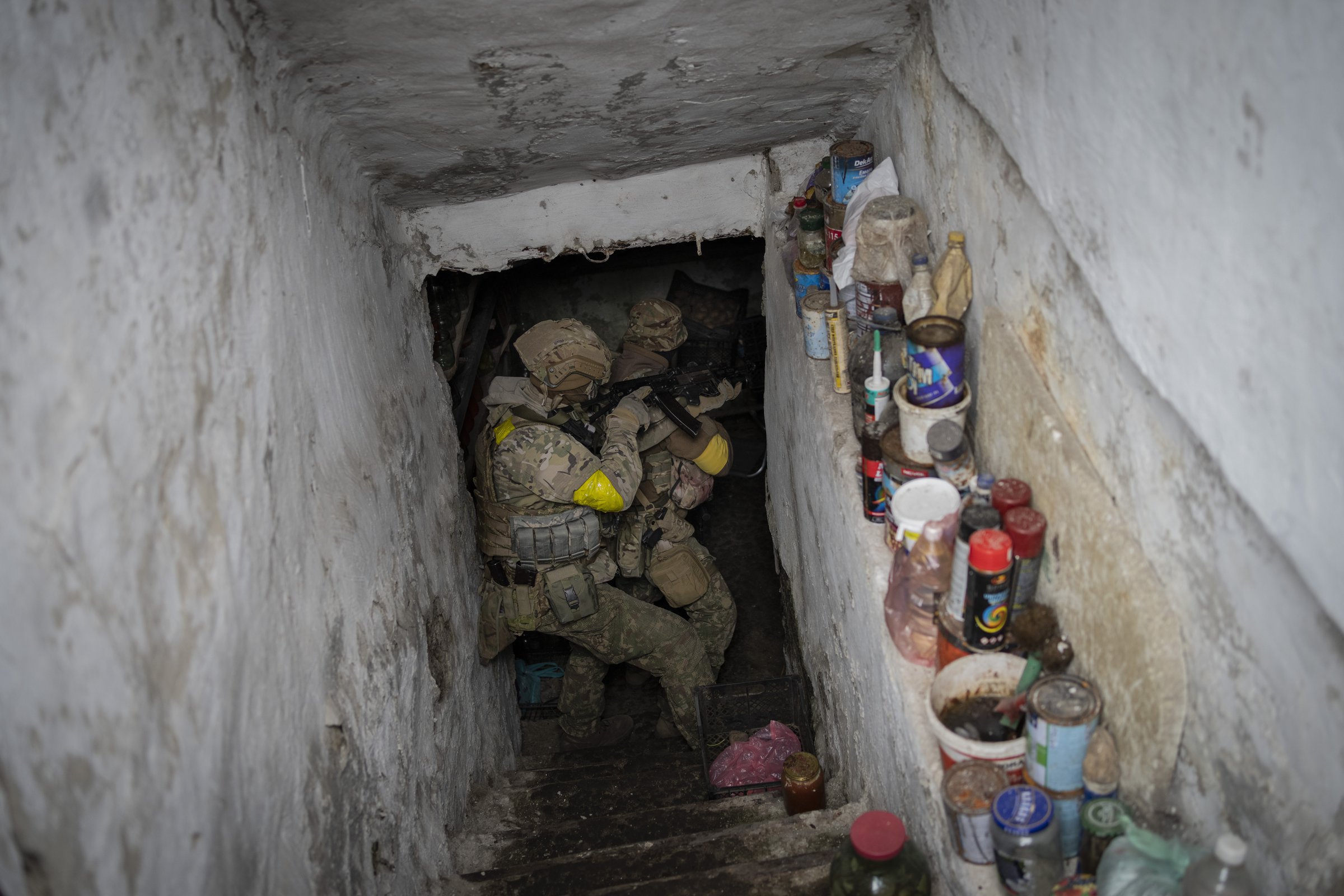