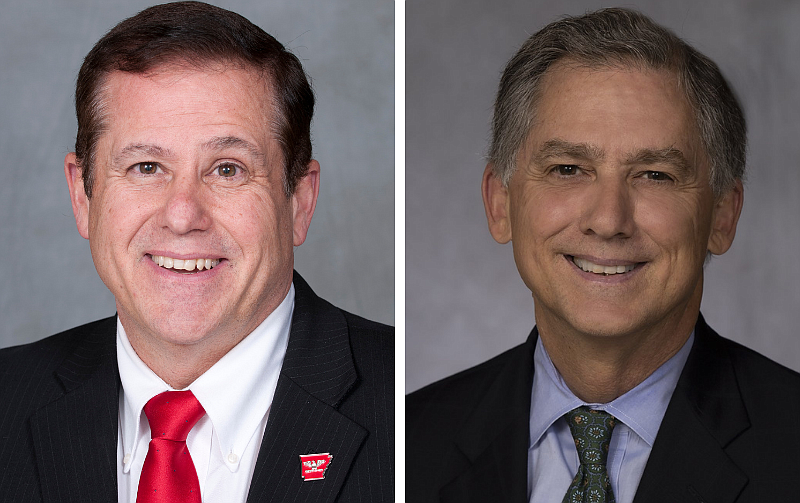 Hill, who serves on the House Financial Services Committee and won by more than 10 points in the 2020 general election, is a four-term incumbent with a seven-figure campaign war chest, according to the latest Federal Election Commission filings.

Hill, of Little Rock, said he's focused on the issues that families are talking about, such as inflation and an "open southwest border."

"Clearly what I've heard time and time again is the mismanagement of our country by the Biden administration," he said.

Reynolds, of Conway, who describes himself as a conservative, is a combat veteran and works as a government consultant on intelligence matters. He argues Hill's voting record is out of step with the district. He's angled to label the former banker with an acronym standing for "Republican In Name Only."

"I love the Republican Party. But we need conservative Republicans, not just Republicans in name only. And that's why I say I'm a RINO remover," he said.

Hill says he's worked as a "principled conservative" for decades. Hill has been a staffer in the U.S. Senate and worked as a senior official in the administration of former President George H.W. Bush.

"I've been working in conservative politics for conservative causes, principally in the economic policy arena, for going on 40 years," Hill said.

It's not the first time Reynolds and Hill have competed against each other. The two were opponents in the 2014 Republican primary. Hill routed Reynolds by more than 30 points in the three-way primary.

Reynolds also previously ran for U.S. Senate in the 2010 Republican primary, capturing 5% of the vote in an eight-man race and losing to Republican John Boozman.

The district map has been altered since the last time Reynolds and Hill ran against each other, with the new lines reflecting population changes revealed by the 2020 U.S. census.

A lawsuit brought by six Pulaski County residents in early March accuses the state of diluting the Black vote in Arkansas' 2nd Congressional District by placing portions of the state's most populous county -- Pulaski County -- in three separate districts. Known as "cracking," the tactic is used to disperse voters of similar interests among populations with which they hold little in common.

The previous 2nd District map had included all of Pulaski County.

In court filings, state officials said the plaintiffs lost a "political battle" and are not satisfied with the redrawing outcome. They argued that federal and state law put forward no vehicle for them to turn their "political dissatisfaction -- and preference for a more Democrat-friendly map -- into a valid legal claim."

Early voting in the contest started Monday. The primary election is set for May 24.

Former President Donald Trump, whose power in the Republican party is on display nationwide this election cycle, hasn't backed either candidate.

Reynolds, who has sought to tie himself to Trump's political brand, visited with Trump at Mar-a-Lago earlier this month, departing with a photograph, but without a public endorsement.

Despite Trump's silence, Reynolds maintains he has backers in Palm Beach, Fla., though he didn't reveal any names.

"There are more people like myself who don't really care for Mr. Hill, and some of them are in Mar-a-Lago. And I think that they understand, we need a change," Reynolds said.

Hill voted in line with Trump's positions 94.1% of the time, according to a tally from FiveThirtyEight, a data-driven news and analysis website.

Hill on Tuesday said he's not been in contact with Trump or his team recently about a possible endorsement.

"My view is that I'm campaigning in the district to be reelected. I have tremendous support across the district," said Hill, commenting that his polling indicates he is doing "very well" and will win the primary handily.

Hill's campaign committee brought in $261,375 from April 1 through May 4 and held a cash-on-hand total of $1.58 million at the end of that period, according to campaign finance filings.

Reynolds' campaign raised $29,724 during that period, according to a filing with the Federal Election Commission. His campaign had $5,265 as of May 4.

Both candidates have pointed to inflation as a key issue.

Reynolds said he believes the 2020 presidential election was stolen from Trump and said there was fraud in the election.

While the former president made similar allegations, dozens of judges rejected postelection litigation from Trump or his supporters, according to The Washington Post. The certified election results and the Electoral College reflected a victory by Democrat Joe Biden, a reality acknowledged on Jan. 6-7, 2021, by the U.S. Congress.

An investigation of the 2020 election by The Associated Press found fewer than 475 potential cases of voter fraud out of 25.5 million ballots cast for president across six states Trump had disputed.

Reynolds has also criticized Hill for voting to establish a commission on the deadly storming of the U.S. Capitol last year.

On Jan. 6, 2021, Trump supporters succeeded in delaying congressional efforts to tally the electoral votes for several hours, but lawmakers and then-Vice President Mike Pence returned once order had been restored and completed the task.

The Jan. 6 commission legislation, which passed the House by a vote of 252 to 175, was backed by 35 House Republicans, but was eventually derailed by Republican opposition in the Senate.

Hill, who recognized Biden's victory when the electoral votes were initially cast, said he thought it was important to find out why the U.S. Capitol was not protected and did not have adequate security on Jan. 6, 2021.

A House select committee, which Hill has criticized as being tainted by partisanship, has been looking into the Jan. 6 riot.

The abortion debate sparked national headlines this month after the disclosure of a draft opinion by the U.S. Supreme Court signaling the possible end of Roe v. Wade, the landmark 1973 ruling that made abortion legal in all 50 states.

The draft opinion, written by Justice Samuel Alito and published by Politico, criticized the ruling that classified the right to an abortion as constitutionally protected, calling it "egregiously wrong from the start."

Arkansas Attorney General Leslie Rutledge has vowed that if the court officially overturns Roe v. Wade, she will certify a "trigger law" passed in 2019 that would immediately outlaw all abortions in the state except to save the life of the mother.

Hill says he's supported exceptions for rape and incest over many years.

Reynolds has said the only time abortion should be considered is in cases of rape, incest and the "life of the mother."