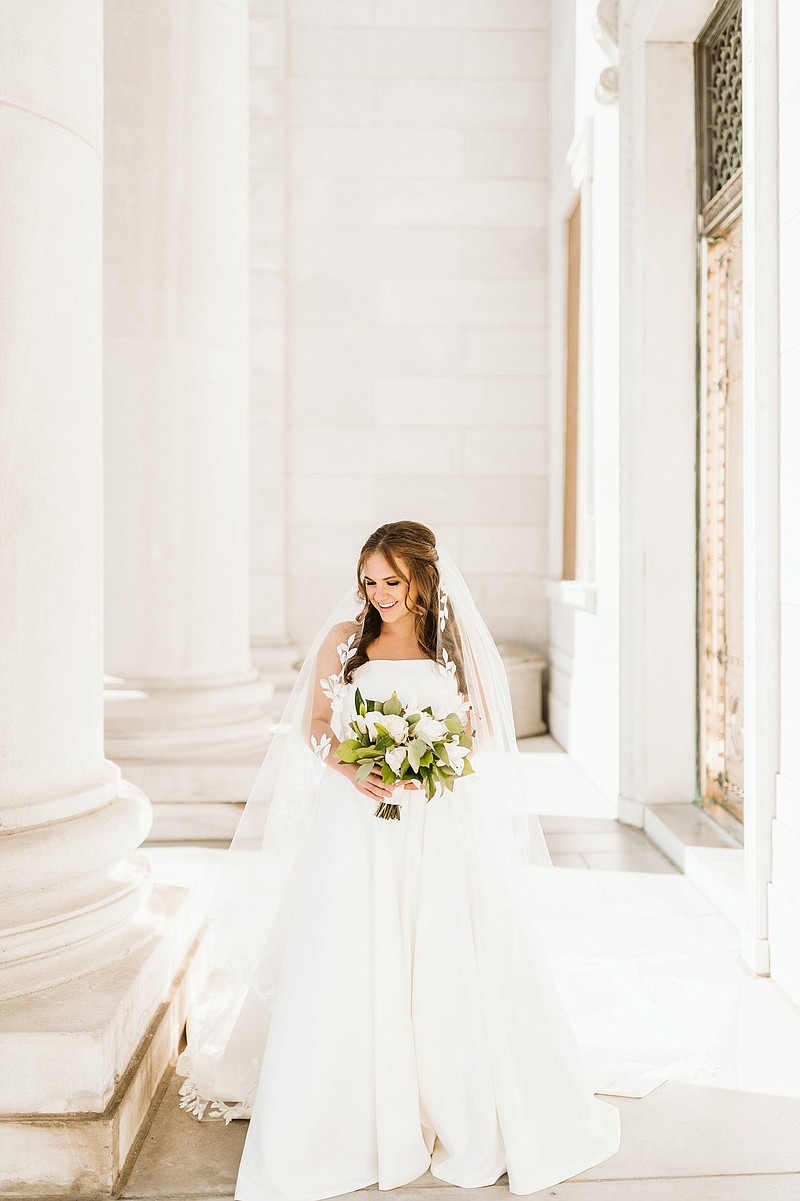 The bride is the daughter of Cathy and Paul "Rusty" Lanier of Little Rock. She is the granddaughter of Edie and Stanley Langley of Bella Vista, the late Gwyn and Tom Conner and the late Paul Robinson Lanier.

Escorted by her father, the bride wore a strapless A-line taffeta ball gown with chapel-length train and carried a bouquet of hydrangeas, lisianthus, peony, dusty miller and eucalyptus.

Emily Lanier Stewart of Little Rock, sister of the bride, was matron of honor. Bridesmaids were Madison Caldwell and Emily Lorince, both of Little Rock; Elisabeth Estes of Austin, Texas; Margo Lee and Grace Madigan, both of Dallas; Mary Hannah Madigan of Bentonville; and Claire Taylor and Alex Zapata, both of Atlanta. They wore light pink gowns with high halter necklines and pleated A-line skirts and carried a smaller version of the bridal bouquet.

Flower girls and ring bearers were Wells Maranto and Nora Frizzell, both of Little Rock; Mae Humphrey of Blevins; and Davis and Shepherd Searcy, both of Nashville, Tenn., nephews of the groom.

Best man was Zachary Holder of Winston-Salem, brother of the groom. Groomsmen were Ryan Alderman, Adam Boyle and Chase Price, all of Charlotte, N.C.; Neal Callahan of Kansas City, Mo.; Josh Copus of Winston-Salem; Garrett Hendricks and Teddy Stewart, both of Little Rock; and Lewis Jones, of Richmond, Va. Guests were seated by Anthony Porcelli, Davis Malone and Garrett Bethel, all of Little Rock.

A reception was held at Sunset Lodge at Rusty Tractor Vineyards. Music was by Diamond Empire Band.

The bride has a bachelor's degree in biological engineering from University of Georgia and will graduate with a medical degree from University of Arkansas for Medical Sciences on Saturday, May 21. She will start a general surgery residency at the University of Tennessee-Chattanooga on July 1.

The groom has a bachelor's degree in finance from the University of Georgia and is a credit analyst at Arkansas Federal Credit Union.

The couple will live in Chattanooga after a honeymoon in Mexico.