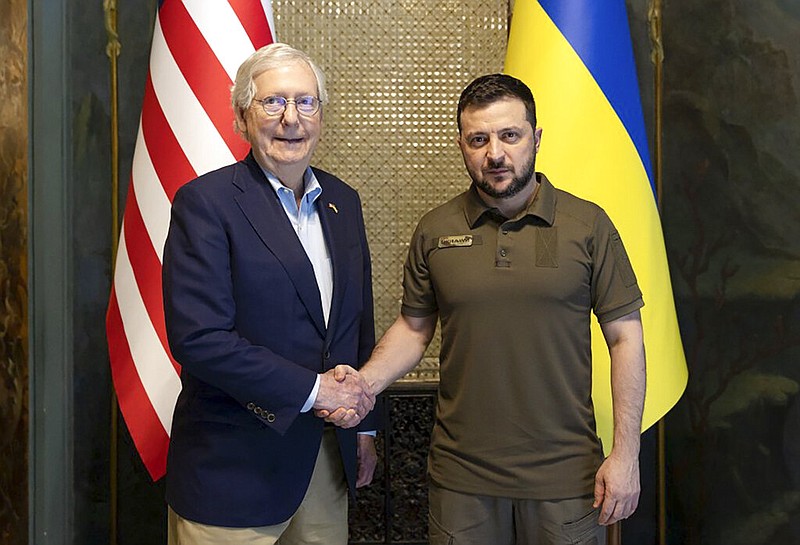 WASHINGTON — Senate Republican leader Mitch McConnell and a delegation of GOP senators are due to visit Helsinki on Monday for talks with Finland's president as the previously neutral Nordic nation bordering Russia seeks NATO membership.

McConnell is a staunch supporter of the Western military alliance, and the visit by the Republicans who made a surprise stop over the weekend to Ukraine's capital delivers a show of American support for the region as Ukraine battles the Russian invasion.

The office of Finland's president, Sauli Niinisto, said Sunday that McConnell and Sens. Susan Collins of Maine, John Barrasso of Wyoming and John Cornyn of Texas will meet to discuss Finland's NATO membership, the Ukraine war and other issues. McConnell's office confirmed the visit.

McConnell was in Stockholm on Sunday while leading diplomats from the 30 NATO member states met in Berlin to discuss providing more support to Ukraine and moves by Finland, Sweden and others to join NATO in the face of threats from Russia.

Several hours after Finland's announcement, Sweden's governing party also endorsed joining NATO, a move that could lead to the country's application within days.

The U.S. lawmakers' high-level meeting in Finland comes as the Congress is working to approve $40 billion in military aid to Ukraine, a substantial infusion of support for the region. The measure includes $6 billion for Ukraine for intelligence, equipment and training for its forces, plus $4 billion in financing to help Ukraine and NATO allies build up their militaries.

The latest round of assistance would push U.S. support to Ukraine beyond $50 billion, which has raised concerns from some conservative Republicans wary of the price of overseas spending. The measure stalled in the Senate over the objection of Sen. Rand Paul, R-Ky., but McConnell is determined to see that it passes in the coming week.

"They're only asking for the resources they need to defend themselves against this deranged invasion," McConnell said this past week of the Ukrainians. "And they need this help right now."

House Speaker Nancy Pelosi, who already pushed the aid through the House with bipartisan votes, said on CNN's "State of the Union" about the Senate Republicans: "They couldn't pass the Ukraine bill with the senators going over to Ukraine empty-handed with a promise. We passed the bill."

On Saturday, McConnell and his colleagues met with Ukrainian President Volodymyr Zelenskyy, and afterward issued a statement after leaving the country: "Our delegation reaffirmed to President Zelenskyy that the United States stands squarely behind Ukraine and will sustain our support until Ukraine wins this war."

McConnell added: "It is squarely in our national interest to help Ukraine achieve victory in this war and to help Ukraine and other countries deter other wars of aggression before they start."

Zelensky, in his nightly video address Saturday, said he believed that the senators' trip showed "the strong connection between the Ukrainian and American people. We discussed various areas of support for our country, including defense and finance, as well as strengthening sanctions against Russia."

It was the second high-profile congressional delegation to stop in Ukraine in as many weeks. House Speaker Nancy Pelosi, D-Calif., visited on May 1 with a group of House Democrats and promised Zelenskyy that the United States will "be there for you until the fight is done."