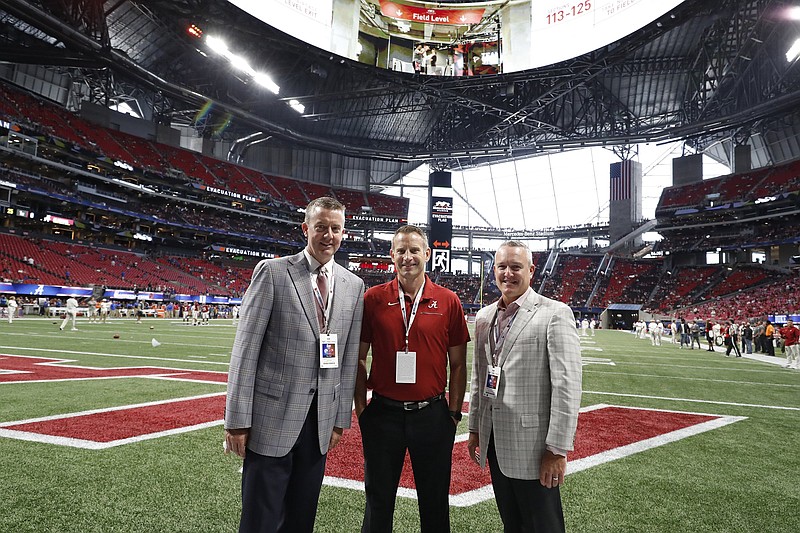 JONESBORO -- All too often during his 12 years at Florida State, Jeff Purinton ducked out of the office for a few hours during the day.

It wasn't due to a lack of commitment. But when legendary coach Bobby Bowden requested Purinton's presence on the golf course as his playing partner, neither Purinton nor his boss, sports information director Rob Wilson, could say no.

At Alabama years later, Purinton often found himself opposite another coaching legend.

"[Coach Nick Saban] usually won because he had the golf coach or somebody really good on his team and I got the other guy, so it was a little bit stacked," Purinton recalled. "But he always joked, 'You don't have to pay me the $10 or whatever the wager was. Put it to your girls' shoe fund.' "

That Purinton brushed shoulders with two of the greatest coaches in college football history is no coincidence.

Hours spent on the golf course around legends like Bowden and Saban, as well as colleagues at varying levels within the college sports machine, armed Purinton, 46, with the know-how essential to leading a modern-day athletic department.

Those who have both worked and played with Purinton -- named Arkansas State's vice chancellor of intercollegiate athletics on May 4 -- have long recognized the two traits that make him both a good golf partner and a ready-made athletic director: Authenticity and approachability.

"He's been more than ready," former Florida State Athletic Director Dave Hart told the Arkansas Democrat-Gazette. "Jeff Purinton knows that how you treat people matters, and when you have a person who is trying to help elevate your career as one of his priorities, that creates a bond."

The pairing of starting quarterback and sports information graduate assistant was unlikely, if not unique.

Chris Weinke's case upon arriving in Tallahassee, Fla., was equally uncommon, though. Weinke was a high school All-American in 1989 and committed to play football at Florida State.

But after the Toronto Blue Jays drafted Weinke in the second round of the 1990 Major League Baseball Draft, he opted for the diamond. Bowden promised Weinke that he'd have a spot with the Seminoles if he ever chose to return to football, and at age 25 in 1997, Weinke did just that.

Purinton -- who graduated from Florida State in 1997 -- stuck around as part of the football team's sports information staff, and he found a friend in Weinke. The pair bonded over golf.

They began living together during the 1998 season and the next year, which ended with the second of the Seminoles' two national titles under Bowden, Purinton took the lead on his roommate's Heisman Trophy campaign.

Weinke quipped he could never duck an interview. Purinton would eventually find him.

"He takes a lot of credit, on the media side, for me winning the Heisman, and he'll probably tell you that," Weinke said. "He works his tail off, and his ability to have a vision before everyone else is paramount in his success."

Now the quarterbacks coach at Georgia Tech, Weinke went on to play seven seasons in the NFL, sharing the journey through young adulthood and years beyond with Purinton.

"I can pick up the phone at any time, any day and he's going to answer it," Weinke said. "That speaks volumes of Jeff."

Purinton felt a comfort in Tallahassee.

But Hart knew his protege needed to be pushed beyond the Florida State bubble. It's why he encouraged Orange Bowl CEO Eric Poms to hire Purinton as the bowl's director of media relations in 2006.

"[Jeff] was young, but you could see it," Hart recalled. "I told him, 'One of these days, you're going to be a very, very good administrator in an athletics program if that's what you want. ... But all you know right now is one thing. You need to leave the nest.' "

Poms saw what Hart had previously: A young, ambitious staffer who was quickly able to develop meaningful relationships.

Working at the Orange Bowl also gave Purinton windows into pieces of the industry he rarely dealt with at Florida State. It exposed him to the corporate underbelly of college sports hidden just beneath the raucous cheers of stadiums filled to the brim on Saturdays in the fall.

"It opened up an understanding of the marketing, the public relations as it relates to working through the South Florida community and navigating the corporate landscape, all the key stakeholders that are in your orbit," Poms said. "It probably took him to a place that gave him a broader sense of being in a major market."

When his deal at ASU was being finalized, Purinton tried to let as many of his past confidants and mentors in on the news as soon as he could. Hart, who was in a session with college coaches and administrators in Arizona at the time, couldn't be reached.

Hart did eventually manage to reach his phone. A voicemail from Purinton gleamed on the screen.

"He said, 'I need to thank you again for getting me out of my comfort zone,' " Hart said.

Landing in Tuscaloosa in 2007, Purinton rose up the Alabama administration. He was promoted to senior associate athletic director in 2015 following eight years working directly with the football team, then received three more promotions between 2018-22.

Greg Byrne, who took over as the Crimson Tide's AD in 2017, said after briefly working with Purinton that he realized Purinton was someone who needed to be a part of every "major decision in our department."

"He's genuine, he backs up what he says, he is honest, and I think people gravitate toward that," Byrne said. "I could always count on Jeff to tell me what I needed to hear."

That, in particular, was something Purinton honed as far back as his time working for Bowden.

"He was a confident guy," then-Florida State offensive coordinator and former Georgia head coach Mark Richt recalled. "Time is so valuable [as a coach], you need a guy you can trust. It can make you nuts if you don't."

In recent years, there were few things Purinton didn't do at Alabama.

He led Crimson Tide Sports Marketing, the athletic department's promotional arm. He played a major role in the process that brought eventual SEC men's basketball Coach of the Year Nate Oats to Alabama from Buffalo. He headed up a fundraising initiative that is on track to generate $600 million over 10 years, supporting significant facility renovations

"[Jeff] is a very good leader and he takes feedback, said West Virginia Athletic Director Shane Lyons, who served as Alabama's deputy AD from 2011-15. "It's understanding that you can't do this job by yourself. It's about the people you surround yourself with.

"He's somebody that you want to be around."

Even after nearly three decades in the industry, Purinton doesn't profess to know it all. The Red Wolves' 13th athletic director understands that stepping into the big chair for the first time will have its unforeseen challenges.

That doesn't mean he's not equipped to solve them.

"It's similar to coaching: You have to go through things and learn how to deal with difficult situations," Purinton said in his introductory news conference. "I'm not going to sit up here and act like I have all the answers. But when I don't, I have plenty of people I can call."

There are fellow athletic directors like Byrne, Lyons and Hart. There are players like Weinke and former Alabama running back Mark Ingram. There are boosters, fellow administrators and members of the -- namely ESPN's Rece Davis and Kirk Herbstreit -- who sang Purinton's praises when his hire was announced last week.

The one person Purinton can't check in with is Bowden, who died in August 2021 of pancreatic cancer at age 91.

Weinke and Purinton made a visit to Bowden in Tallahassee in early 2021 -- fittingly before heading out for a round of golf -- not knowing it would be the last time they'd see their old coach.

"Coach Bowden was probably the best person I've ever been around," Purinton said. "He made [Florida State] a place where everyone wanted to go to work. It wasn't about money. It wasn't about titles. You felt like you were a part of something special."

Purinton has those things now. With a five-year contract that will pay him $400,000 a year, the Palatka, Fla., native will ascend into the role he's long worked toward.

Those who have seen the journey through expect only the best.

"Jeff is a great person who happens to be a great administrator," Hart said. "He's quick to laugh, he's quick to make you feel comfortable. But he's very serious about getting his job done."