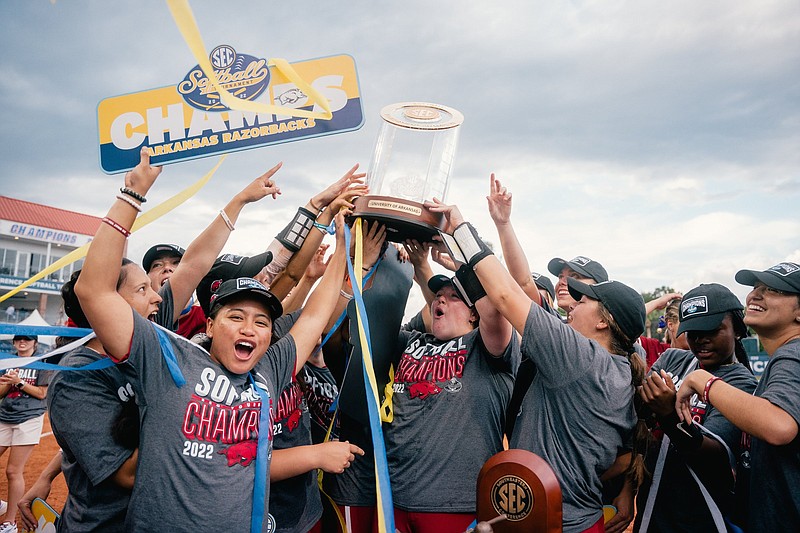 University of Arkansas softball players celebrate after Saturday’s 4-0 victory over Missouri for the SEC championship. It is the first tournament championship in program history for the Razorbacks, who also were the regular-season league champions. (Photo courtesy Fred Daniels/SEC Social)

The University of Arkansas is the SEC softball tournament champion for the first time in program history.

No. 4 Arkansas (44-9) headed to Gainesville, Fla., for the 2022 SEC Tournament on a mission. After a three-day stint, that goal was accomplished as the top-seeded Razorbacks shut out No. 24 Missouri 4-0 in the championship game, backing up a regular-season crown with a tournament title.

"I'm just really, really proud," Arkansas Coach Courtney Deifel said. "I'm just grateful for all the players since we got here from Year One. Everyone keeps reminding me that we weren't that good in Year One, but we needed that.

Arkansas controlled the game from start to finish behind a shutout from Chenise Delce and 11 hits from its the offense.

Delce, who was named SEC Pitcher of the Year on Friday, made it a long day for Missouri. She closed the game by retiring 13 batters in a row and only allowed two hits. Delce (17-2, 2.07 ERA) needed only 68 pitches and recorded five strikeouts.

"She looked absolutely dialed from the first inning," Deifel said. "Missouri is a very, very good offense and they really just didn't have an answer for Chenise today."

The Razorbacks jumped ahead early. After leadoff singles from KB Sides and Hannah McEwen, the Razorbacks scored once in first inning on an RBI single from Danielle Gibson.

Freshman Kacie Hoffmann hit a leadoff triple and Marlene Friedman, who only had 10 at-bats prior to the game, hit a bloop RBI single to put Arkansas ahead 2-0.

After Sides drew a leadoff walk to begin the fifth inning, McEwen sent a single to right. The speedy Sides capitalized on a throwing error from Tigers' right fielder Alex Honnold, going from first to home.

With the bases loaded, a wild pitch allowed Danielle Gibson to slide home and give Arkansas a 4-0 lead.

Hoffmann paced the Razorback bats, going 2 of 3 with a single and triple. McEwen, LaValley and Taylor Ellsworth also produced two hits each.

"I don't think I ever really feel like I have it until the game is over," Delce said of her mindset to finish games. "I've watched too many games where people lose it in the last inning. Going out there and knowing I have the stuff to win a game helps me, but knowing we have an offense and a defense that can win games ... I'm pretty confident in this team."

The Razorbacks have played with a chip on their shoulders this season.

After sharing the SEC championship last year with Florida, pundits on the national level discredited the title, saying it was the result of a weak league schedule. The disrespect didn't sit with Deifel or any of the 16 returning players.

"I know that we had a pretty p****d off group coming off last year, feeling like everyone made excuses for why we were good," Deifel said prior to the tournament. "When you accomplish something and then you hear everyone making excuses for why you did it, it's really frustrating. Because you don't hear them do that about your counterparts.

"We've been playing high-level softball. I don't know that the chip's ever going to leave."

The Razorbacks outscored opponents 11-1 through the three-game stint in Gainesville. Mary Haff and Delce each tossed a shutout in the process.

"The game runs on pitching," Deifel said of her team's arms. "So to see them do what they've done throughout the SEC, leading the SEC in ERA, and then getting here and continuing to improve their game against really, really talented offenses is huge. It just gives the rest of our team so much confidence."

Arkansas awaits to see if the road to Oklahoma City for the Women's College World Series will run through Fayetteville. In the latest D1Softball.com projections, Arkansas is forecast as the No. 4 seed. The overall top-eight teams are guaranteed to host through the super-regional round. The Razorbacks are 24-4 at Bogle Park this season.

The NCAA Softball Tournament bracket will be revealed during a selection show today at 6 p.m. Central on ESPN2. 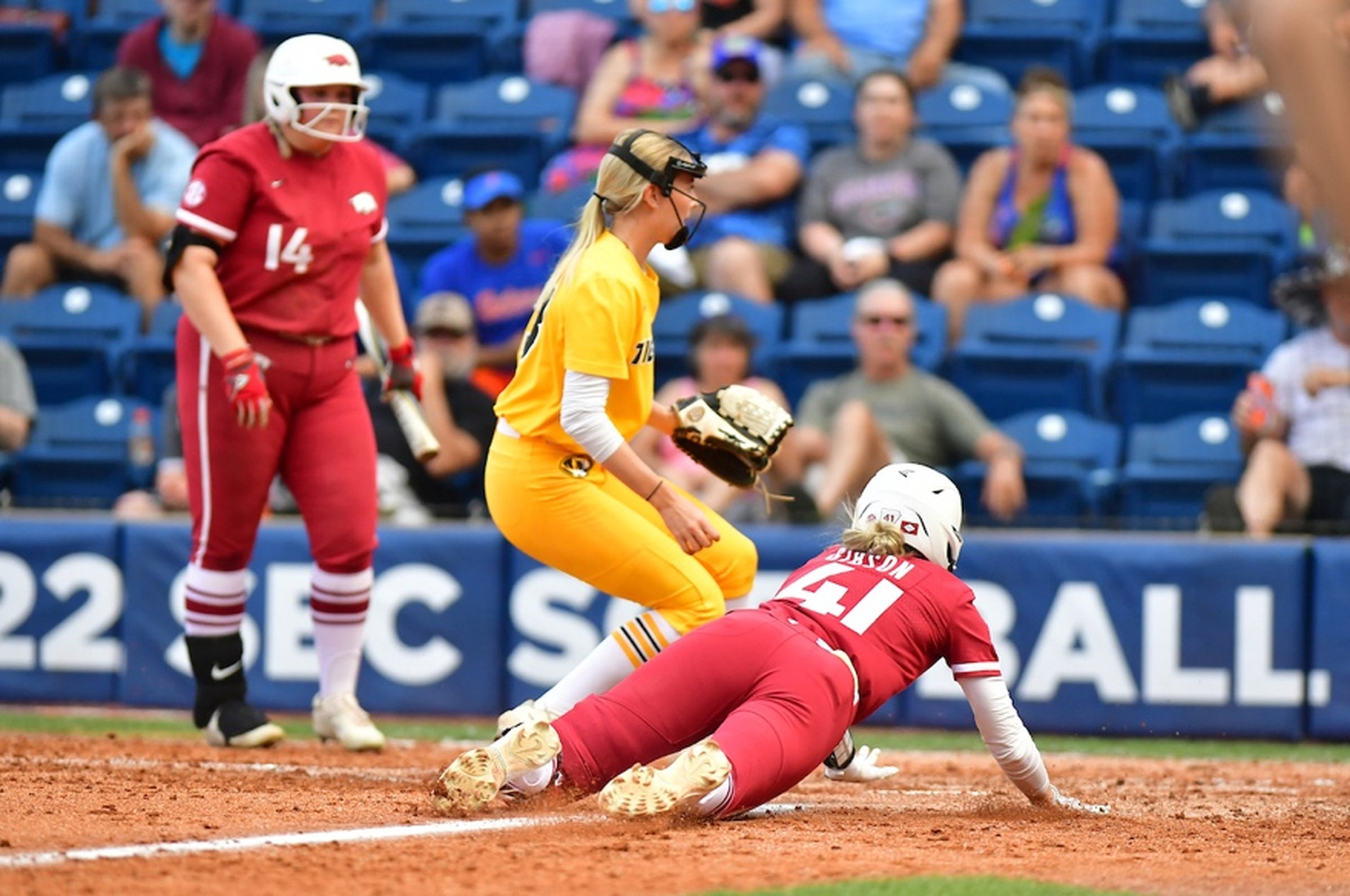 Arkansas first baseman Danielle Gibson (41) slides home during the Razorbacks’ 4-0 victory against Missouri in the SEC Tournament championship game Saturday at Katie Seashole Pressly Stadium in Gainesville, Fla. Gibson finished 1 of 2 at the plate and sparked Arkansas’ offense with an RBI in the first inning to give the Razorbacks an early lead. (Photo courtesy University of Arkansas Athletics)