Razorbacks beat Vanderbilt to even series 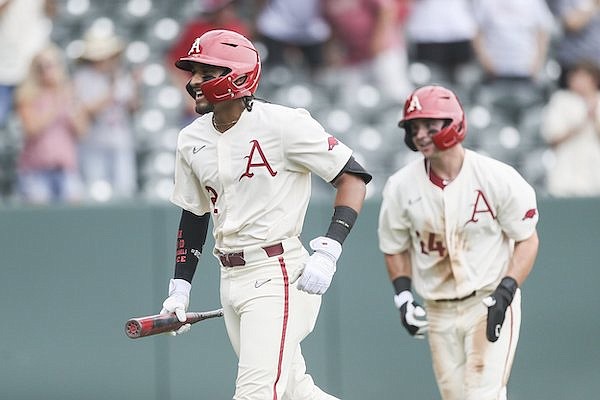 Arkansas shortstop Jalen Battles (3) is followed to the dugout by outfielder Braydon Webb (24) after Battles hit a two-run home run during a game against Vanderbilt on Sunday, May 15, 2022, in Fayetteville.

FAYETTEVILLE — Arkansas scored three runs over the sixth and seventh innings, and reliever Will McEntire pitched three scoreless innings to give the Razorbacks an 11-6 victory over Vanderbilt on Sunday in a game that was postponed Saturday night.

The game resumed with Arkansas ahead 8-6 in the bottom of the sixth inning. Zack Gregory was hit by a pitch by Patrick Reilly on the first pitch after the restart, and scored on a two-out wild pitch by Brett Hansen.

Jalen Battles added a two-run home run to left field with one out in the seventh inning to put the Razorbacks ahead 11-6. It was Arkansas’ third home run of the game. Cayden Wallace homered twice Saturday night.

McEntire, who made his SEC debut with a 3 1/3-inning relief outing at Auburn last Sunday, earned his first save in a three-inning appearance against the Commodores. He allowed singles in the eighth and ninth innings, but stranded both runners.

Arkansas (37-13, 17-8 SEC) evened the three-game series against the Commodores, who won 9-6 in 10 innings Friday. The Razorbacks also kept a one-game lead over Texas A&M in the SEC West standings with four games to play.

The seven-inning series finale between Arkansas and Vanderbilt is scheduled to begin Sunday at 12:45 p.m.

Arkansas fell behind 5-1 Saturday, but responded with seven consecutive runs. Wallace hit a three-run home run in the fourth inning to put the Razorbacks ahead 6-5, and Jace Bohrofen added a two-run double in the fifth inning to extend the lead to 8-5.

Vanderbilt (33-16, 13-13) cut the lead to 8-6 on Tate Kolwyck’s one-out solo home run in the top of the sixth inning. The Commodores brought the tying run to the plate in the inning, but Arkansas reliever Zebulon Vermillion came out of the bullpen to strike out two-hole hitter Jack Bulger, which stranded a runner at first base.

As the teams were coming onto the field for the bottom of the sixth at 8:46 p.m., game umpires told them to go back to their dugouts due to lightning within an 8-mile radius of Baum-Walker Stadium.

Radar indicated a brief thunderstorm would pass through Fayetteville, but the storm stalled and heavy rain and lightning continued for more than an hour.

The game remained in a delay until an announcement was made at 9:49 p.m. that the game would be resumed Sunday.

Arkansas took a 1-0 lead on Wallace’s leadoff home run in the bottom of the first inning.

Freshman left hander Hagen Smith kept that lead intact until the third, when Vanderbilt scored five runs against him.

Enrique Bradfield led off with an infield single, advanced on a groundout and stole third base before he scored on Dominic Keegan’s sacrifice fly that was the second out of the inning. That tied the game 1-1.

From there, Javier Vaz doubled and T.J. McKenzie singled home runs to chase Smith after 2 2/3 innings.

Zack Morris replaced Smith and allowed a two-run double to Kolwyck to put the Commodores ahead 5-1.

Morris settled in and pitched scoreless fourth and fifth innings as the Razorbacks mounted their comeback. Jalen Battles led off the bottom of the third with a walk and scored on a two-out fielding error by right fielder Spencer Jones following a single by Michael Turner.

Vanderbilt starter Chris McElvain walked three consecutive batters with one out in the fourth. Braydon Webb scored on Zack Gregory’s sacrifice fly to trim the Commodores’ lead to 5-3, and Wallace followed with his second home run of the game.

McElvain allowed 5 earned runs, 3 hits and 5 walks in a 4-inning start and suffered his fourth loss. He struck out 3 batters, but he threw only 41 of 84 pitches for strikes.

Kolwyck’s sixth-inning home run came against Morris. It was the first earned run allowed by Morris since an April 5 game against Central Arkansas and snapped a 17-inning scoreless streak.