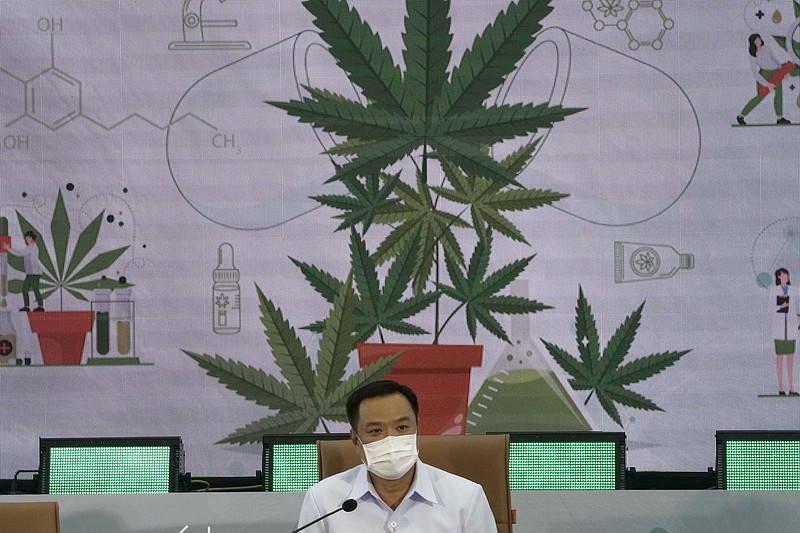 FILE - Thailand's Public Health Minister Anutin Charnvirakul speaks at a news conference at the Public Health Ministry in Nonthaburi, Thailand, Feb. 8, 2022, after signing a measure that drops cannabis from his ministry's list of controlled drugs. Charnvirakul, who has spearheaded the country’s drive to decriminalize cannabis, has said on Wednesday, May 11 the government will distribute 1 million of the plants free when most legal restrictions on production and possession of the drug are lifted next month. (AP Photo/Sakchai Lalit, file)

BANGKOK -- Thailand's public health minister, who has spearheaded the country's drive to decriminalize cannabis, says the government will distribute 1 million of the plants free when most legal restrictions on production and possession of the drug are lifted next month.

Public Health Minister Anutin Charnvirakul signed a measure in February officially dropping cannabis, best known in the form of marijuana, from a list of controlled drugs. Closely regulated use of cannabis was legalized in 2018, with several restrictions gradually eased since then.

Thai officials hope that a major new cannabis industry will blossom, not only generating hundreds of millions of dollars directly each year, but also attracting foreign tourists, who have only recently begun returning in large numbers after being largely absent during the coronavirus pandemic.

When the measure becomes effective on June 9, possessing and using all parts of cannabis plants, including flowers and seeds, will be allowed. However, extracted content will remain illegal if it contains more than 0.2% of the psychoactive ingredient that produces a "high" -- tetrahydrocannabinol, or THC.

Anutin declared recently on his Facebook page that individuals will no longer need to acquire a permit to grow cannabis at home, as long as it is declared to be for medicinal purposes and does not have THC content above the legal maximum. Thai officials have not explained how the conditions can be enforced. Anutin said with little elaboration that 1 million cannabis plants would be handed out beginning in June, and that people would be able to grow as many as they like at their homes.

Large-scale enterprises will still need permission from the country's Food and Drug Administration to make cannabis products, which are seen as being used mainly for medicines and food additives.

The Food and Drug Administration received about 4,700 applications by late April for licenses to import, possess, grow and produce cannabis and hemp, the Bangkok Post newspaper reported. It quoted an FDA official as saying the products planned for production include hemp seed oil, dietary supplements, beverages, seasoning sauce, jelly candy and instant food.

Anutin's Bhumjai Thai Party, a major partner in the coalition government, campaigned in the 2019 general election for the legalization of cannabis production, saying it would aid the country's farmers.