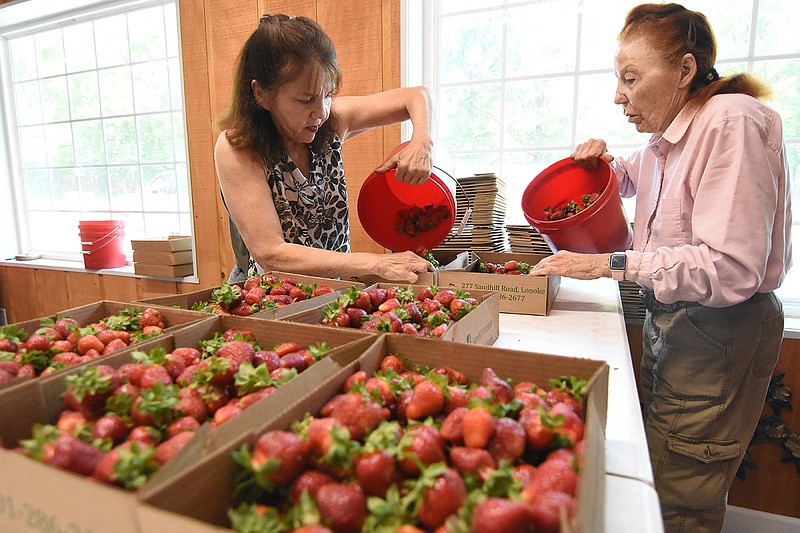 Ekko Barnhill (left) and Carlotta Barnhill pour buckets of strawberries into boxes to be sold Thursday morning at Barnhill Orchards in Lonoke. The Barnhills were named Farm Family of the Year for Lonoke County. The drive thru is open daily from 9 a.m. to 5:30 p.m..(Arkansas Democrat-Gazette/Staci Vandagriff)

In Jefferson County, the honorees are Brett and Juli Stewart of Brett Stewart Farms. They have been in business for six years and farm 2,000 acres including soybeans, corn, rice and wheat, according to the Jefferson County report book from the bureau.

The couple is a first-generation farm family. They began with 150 acres.

"We started farming because we had a desire to be farmers," Stewart said. "We literally started with a pickup truck and a 4-wheeler."

He shares his experience with others. Stewart has spoken for the past two years at the National Conservation Systems Cotton and Rice Conference about soybean insect management and experiences from a first-generation farmer.

The Stewarts are heavily involved in their church. Brett Stewart teaches Sunday School and leads the music for worship services at South Side Missionary Baptist Church in Star City and Juli Stewart leads the Wednesday night pre-school program.

Southeast Arkansas families by county include:

Since 1947, the Arkansas Farm Family of the Year Program has served as a vehicle to recognize outstanding farm families throughout the state.

The basis for selection as Arkansas Farm Family of the Year includes efficiency of production, conservation of energy and resources, leadership in agricultural and community affairs, home and farm improvement, and home and farm management.