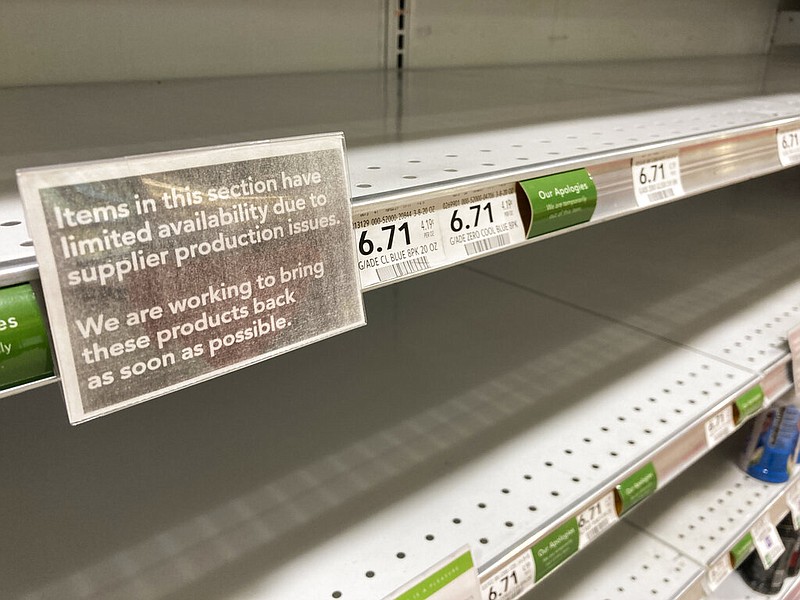 Shelves, empty "due to supplier production issues," are shown in a grocery store in Surfside, Fla., in this Dec. 15, 2021 file photo. (AP/Wilfredo Lee)

Global forces such as supply-chain disruptions, severe weather, energy costs and Russia's invasion of Ukraine have contributed to rising inflation rates that have spooked stock market investors and put President Joe Biden's administration on the defensive.

But the pressure is felt most directly by shoppers doing their weekly runs to grocery stores, where some items that used to be plentiful have been missing for months and where prices for produce, meat and eggs remain stubbornly high.

At a Stop and Shop in Elizabeth, N.J., Hagar Dale, a 35-year-old Instacart shopper, pointed out that a single packet of powdered drink mix that once sold for 25 cents shot up to 36 cents in early May. Two days later, it was selling for 56 cents, she said.

"Lord forbid if you have a big shop to do," Dale said as she left the grocery store with a customer's order. "You're penny-pinching."

Such price hikes have led to sticker shock, resignation and for more people to sniff out bargains.

"You look for more deals," said Ray Duffy, a 66-year-old retired banker in an "Unapologetically American" T-shirt who was coming out of a Lidl grocery store in Garwood, N.J., recently.

Lisa Tucker, 54, of Gainesville, Va., drives a few extra miles to Giant because the food prices are lower than they are at stores closer to her house. She buys in bulk when the prices are favorable -- on a recent run she bought eight boxes of cereal because they were selling for $1.77 each -- and has enrolled in multiple loyalty rewards programs.

"It's strategic," she said.

Tucker also looks for meat that is nearly expired -- and therefore steeply discounted.

On Tuesday, Tucker snapped up a soon-to-expire 1-pound package of beef for $3.74, marked down from $7.49. To get a heads-up from meat department staff members about such deals, she said she will sometimes bring them homemade banana bread.

Tucker tells them: If a discount sticker is about to be slapped on some Boar's Head bacon, "let me know."

Angie Goodman, a housekeeper from Culver City, Calif., usually eats meat once a week. But now that steaks have doubled in price, she said she might have to cut back to once a month.

Goodman, 54, said she makes about $15 an hour, a figure that has remained stagnant as the cost of living has skyrocketed.

"Basic things are very expensive," she said. "It's crazy."

Isabel Chambergo, 62, a warehouse worker in Elizabeth, said that meals she once planned at home are now mapped out while she is shopping, so she can use her phone to scan items for digital coupons. That saves $10 to $15 per shopping trip, she said.

"That's how I manage," Chambergo said as she left a Stop and Shop with her husband, Arturo, 62.

"It helps a little," she said. "It's not a lot, but I'm trying to buy healthy things that also fill us up."

That is, if she can even find the ingredients she needs.

Chambergo said she used to buy a quinoa-and-rice mix at Stop and Shop that she used to make hearty soups. But it has not been on the shelves for at least two months.

Meanwhile, portions at U.S. restaurants are getting smaller. Some call it shrinkflation: when sizes shrink, but consumers are paying the same price, or sometimes even more, for the meal or product.

America's restaurants are in the same boat as the rest of the country, battling the soaring food and fuel costs that recently helped send U.S. inflation to a 40-year high. Eateries have hiked prices, too. Government data Wednesday showed costs for food away from home have climbed 7.2% over the past 12 months. But now, restaurant operators are starting to worry about how much more they can raise the tab before diners start to balk, especially for something that's considered optional spending.

So companies are instead coming up with some behind-the-scenes strategies to crimp costs, hence the shrinking portions. At Subway Restaurants across the U.S., rotisserie chicken wraps and sandwiches have less meat. Domino's Pizza has cut down orders of boneless wings from 10 pieces to eight, and diners at Burger King will see the same reduction for their nugget meals. The side cups of salsa are getting smaller at Salsarita's Fresh Mexican Grill. And in Southport, N.C., the 1-pound salads at Gourmet to Go are now 2 ounces lighter.

"Yes, it's inflation going on," said Carolyn Gherardi, owner of Gourmet to Go, a small single-story shop that offers customers grab-and-go "homestyle" meals. For now, she's holding price steady on those salads at $6.95.

"We're trying to keep the cost the same, but in essence it's less value," she said.

Restaurants are betting that consumers won't mind a few fewer fries, or a little less filling on their sandwiches as much as they would grumble about seeing yet another price increase. It's a strategy that tends to work because of how our brains compute -- or don't compute -- the changes, said Nailya Ordabayeva, a marketing professor at Boston College.

"People tend to underestimate changes in object sizes," she said. "It's pretty convenient for companies to actually move size, move around size, more than they do price, because people do notice price changes more."

Astute grocery shoppers will know that switching to smaller sizes is an old technique to deal with tighter margins, especially for makers of packaged goods. But food costs are rising so rapidly right now that the practice is becoming more widespread, hitting restaurants and supermarkets.

In February, nondairy cheese maker Daiya Foods got rid of its 8-ounce package size of vegan shreds to make room for a slightly different product that's only 7.1 ounces. Gatorade has made a similar move, recently phasing out its 32-ounce bottles to just sell its 28-ounce version. Consumers on the r/shrinkflation subreddit forum have posted pictures of examples like smaller bags of chips, shrinking soap bars and lighter bottles of lotion.

Speaking with AARP, Edgar Dworsky, founder of Consumer World, said that major brands have cut the number of sheets that come on a roll.

Sometimes companies are attributing the changes to factors such as supply-chain issues or even consumer preferences. Gatorade, for example, says part of the reason for the smaller bottle size is that it's easier to grip. Subway said reductions for the rotisserie-style chicken sandwiches "reflect our ongoing evolution to improve our offerings and are not in response to inflation."

About 56% of U.S. diners say they would be more willing to pay a little extra if restaurants clearly explain why prices are rising, according to a survey commissioned by MarketMan.

Consumers are likely to see more shrinkflation and cost-cutting measures in the months ahead, since price pressures aren't going away anytime soon. The U.S. Department of Agriculture now expects retail food prices to gain 5% to 6% this year -- roughly double its forecast from three months ago.

Information for this article was contributed by Maria Cramer, Christine Hauser and Livia Albeck-Ripka of The New York Times and Leslie Patton, Alexandre Tanzi and Daniela Sirtori-Cortina of Bloomberg News.