From Arkansas writing workshops to greenhouses, here’s permission to grow in the middle of May 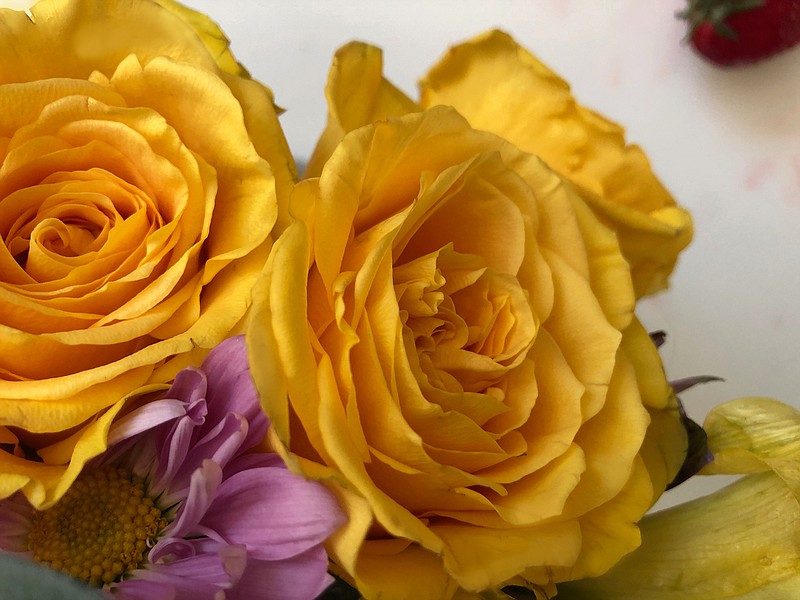 Remember being younger, asking, hoping, and being told that? Possibly in pointedly proper English, as a playful corrective to your hopeful question, "Can I ... ?" What joy, what permission, what freedom!

Fayetteville author, cook and teacher Crescent Dragonwagon notes that in our asking, even grownups confuse those verbs, which have a different meaning.

"'Can' is capacity and 'may' is permission," she says. In her Fearless Writing workshops (dragonwagon.com), she encourages that permission. "The only person who can give permission to you to do something that you want to do -- finally, it's you, if you want to do it enough. And I have the pleasure of watching people start holding the reins a little loosely."

So here we are in May, the only three-letter month and one of only two whose name is also a verb. Today is its fulcrum, smack in the middle, 15 days all spent, 15 whole days yet to unwrap, and this one to live. What do you want to do with it?

Gentlegardeners, rev your engines. May is when the most cautious of Arkansas gardeners feel ready to plant, according to Nickie Galloway, an owner of The Nurserie Farm and Garden Market on Stagecoach Road in Little Rock (where Horticare used to be, and before it, Birnam Wood).

"Everyone starts picking up their planting" in May, she said. "A lot of people won't plant until May because of fear of frost in late April."

What's good in May? "Let me go back to my handy-dandy list here," she said. Leading the pack is strawberries, whether planting or serving on dessert plates.

"Strawberries are one of our first few veggie crops that come available in late April or early May. We're in full peak strawberry season," she said. "That's what everybody wants at the moment."

The Nurserie grows about a quarter of the offerings in their produce market -- "we always have leafy greens" -- and buys the rest from local or regional growers. Recently they've offered strawberries from Cabot and Crossett; the earliest flats were imported from Louisiana.

Dragonwagon, who grew up in New York and formerly ran a restaurant and bed and breakfast inn in Eureka Springs, also noted May as shortcake season, and she has ideas about how to serve it.

"Your Southern shortcake is generally between two halves of a biscuit," she said. Northern shortcake is usually yellow cake or sponge cake. Her cast-iron style: "You make cornbread in a skillet. It has that nice crispy underneath edge. And you use that cornbread as the base." She goes heavy on sweetened berries, medium on the whipped cream. "It's seriously good."

Author of the book "The Cornbread Gospels," she is wisely judicious on the question of sugar in cornbread, saying there are many cornbreads. She also makes potato and sorrel soup this time of year, plucking the tart, lemony perennial herb straight from her garden and serving it hot or cold, with cream or yogurt.

May, of course, is not actually named for the verb. The fifth month is named after the Greek goddess Maia.

"The name Maia translates to 'nursing mother,' and Maia is often associated with the 'Earth Mother' Gaia," says Ashley Heath, who teaches world mythology in the English department of the University of Arkansas at Little Rock.

"Maia is considered the goddess of springtime, warmth, and increase," Heath said. "One merely has to look around the pastures and fields of Arkansas to make this correlation between Maia and the month of May. Animal offspring are born between the months of February to May, when the temperatures begin to rise and the fields become lush with grass and wildflowers. The 'nursing mother' Maia is certainly a necessity during this period.

"Maia lends her warmth to May, and her increase is exponential."

Poet and editor John Blase (rhymes with graze) grew up in Arkansas and moved back recently to be closer to family (see arkansasonline.com/516blase). In Hot Springs, after "a tremendous amount of rain" in the proverbial April showers, he sees some exponential increase in local plant life. "Stuff is almost claustrophobic here in terms of growth, from trees to honeysuckle."

He has also noticed it in traffic to Lake Catherine, not far from his home.

It reminds Blase of the poem "Sunday Discordancies" by the late Jim Harrison (see arkansasonline.com/516poem), "where he was talking about how many heartbeats each of us are given in the course of a life." Each creature has "about a billion and a half," the poem goes, spent quickly by hummingbirds and slowly by elephants. The ­poem considers how many are left, and ends:

I warn the hummingbirds out front, "just slow down,"

As they chase me away from the falling hollyhocks.

As a young man in Arkansas and Texas, often nearing the end of the school year in May, Blase felt "a goal of getting out of here ... there was this rushing, hurried pace to things." Now that he is back and likely to stay for a while, May's pace is different.

"You get to a certain age, and that's where I am now, and you think, 'I may not have too many heartbeats.' So I want to gear down -- maybe second gear, maybe low -- and try to enjoy this, the lushness, all those poetic things about slowing down."

"Here's to the coming of blithesome May," wrote poet E.E. Cummings in celebrating its cheeriness. Like all months, May is full of reasons for celebration or awareness.

Foods that get their spotlight in May include American cheese, asparagus, barbecue, eggs, hamburgers, Mediterranean diets, salad, salsa and, yes, strawberries.

We've passed May Day and the wrapping of Maypoles with intricate ribbon dances (in places where that still happens). In Greece, Heath said, May 1 is International Labor Day, "when people generally visit the countryside for picnics and gathering flowers."

We're past Star Wars Day on May fourth, Cinco De Mayo, the Kentucky Derby, Mother's Day and many invented days highlighting lemonade, shrimp, hoagies and apple pie; honoring nurses and receptionists; and granting permission to go without pants or dance like a chicken.

Still to anticipate: days for cherry cobbler, brisket, macaroons, barbers, waitstaff, talking like Yoda, and flying paper airplanes. Today promises a full moon, and invites, "Do Something Good for Your Neighbor Day."

The 19th is "World Plant a Vegetable Garden Day." Galloway lists "squash, watermelon, cantaloupe ... beans, corn, peppers, sweet potatoes, are all good things to start this time of the year."

For those whose spring creative impulse tends to writing rather than gardening, or for those who will still be tending classrooms of restless youngsters into June, Blase offers a prompt.

"I'm a big fan of the five senses. May for me would be smell. Think of a late spring smell from your childhood," he said, within nose-shot of the "legion" thicket of honeysuckle behind his house. "Sit down for five minutes and write or doodle on the smell of childhood. Honeysuckle, tomato ... Anything you can do to get someone out of their head and into their nose, or the surface of their fingertips, or their skin, that's always beneficial."

Dragonwagon also has encouragement for folks with plans for May that fell flat, or who are feeling some version of resolution-fail.

"The most sacred and energizing words in the English language are 'begin again,'" she said. "I really do my best to wake up every day and see it as new a chance to start over. Have a crappy day yesterday? OK, redo it."

"It's silly to let regret prompt one to start on a hike when the sun is high in the sky," she added. Or to plant seeds for crops that do best in cool weather. "But you can hike tomorrow. You can also be thinking about your fall garden and order seeds and stuff for that."

May also means possibility without clear commitment. One may or may not.

Noting May's designation as Mental Health Awareness Month, she said, "This beautiful time when everything is coming back to life" can cause disconnect for people "going through a hard time, or in grief. ... When they've lost the people they used to celebrate it with, there is a dip in emotional equipoise.

"There is a legit case to be made for mental health, personal care, talking to other people."

Perhaps, then, it is, like every month, a perfect time for kindness, for grassroots or sorrel-roots efforts toward speaking hope and encouragement.

With half a month of permission and possibility for growth left, as another authoritative space traveler said, "Make it so."

Laura Lynn Brown is the author of "Everything That Makes You Mom."

CORRECTION: Crescent Dragonwagon wrote “The Cornbread Gospels.” The title was incorrect in an earlier version of this story.

Print Headline: Ode to May