Hogs’ run on runs over: Shutout a first by a SEC team in 92 games 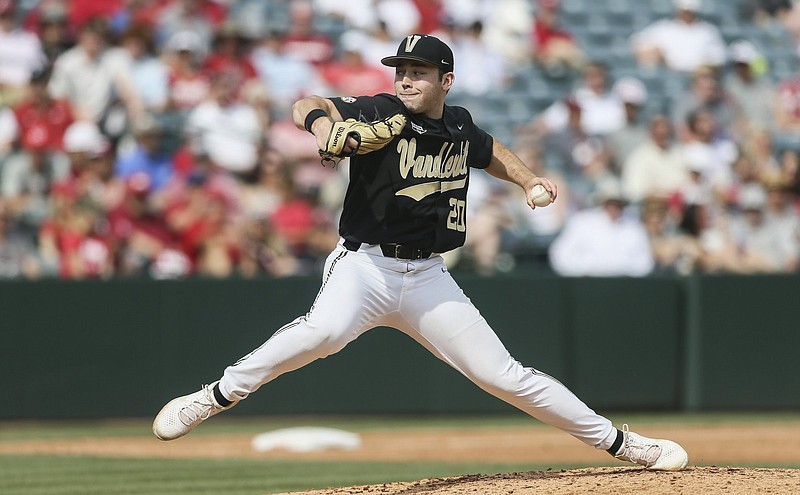 Vanderbilt Carter Holton (20) pitches, Sunday, May 15, 2022 during the third inning of the series closer at Baum-Walker Stadium in Fayetteville. Check out nwaonline.com/220516Daily/ and nwadg.com/photos for a photo gallery...(NWA Democrat-Gazette/Charlie Kaijo)

FAYETTEVILLE -- For the first time in 92 games against an SEC opponent, the University of Arkansas baseball team was shut out.

Vanderbilt beat the No. 4 Razorbacks 5-0 in a seven-inning game Sunday at Baum-Walker Stadium to become the first SEC team to blank Arkansas since it suffered a 10-0 loss at Alabama on March 23, 2019.

The Razorbacks (37-14, 17-10) finished with a split Sunday after beating the No. 21 Commodores 11-6 earlier in the completion of a game suspended Saturday night in the bottom of the sixth inning because of lightning and heavy rain.

Vanderbilt freshman left-hander Carter Holton (7-3) threw his first career shutout in Sunday's finale and his second seven-inning complete game to go along with a 12-1 victory at Hawaii on March 5.

Holton held the Razorbacks to 2 hits with 4 walks and 5 strikeouts. He had 67 strikes on 113 pitches, and his fastball was clocked as high as 98 miles per hour on the stadium scoreboard.

"Carter Holton was outstanding," Arkansas Coach Dave Van Horn said. "We didn't do much against him.

"He had high velocity obviously. I thought he threw his fastball pretty good both sides of the plate."

The hardest hit ball by a Razorback was a drive by designated hitter Dylan Leach on which right fielder Spencer Jones made a leaping catch against the fence in the fifth inning. Arkansas' two hits were a single by Cayden Wallace in the third inning and a double by Robert Moore in sixth.

"Holton pitched ahead all day," Van Horn said. "He walked us a few times, but when you're throwing that hard, you're going to walk some people. His walks obviously didn't hurt him."

The Commodores (34-16, 14-13) took a 1-0 lead with an unearned run off Arkansas starter Jaxon Wiggins in the third inning after a fielding error at first base by Wallace.

"I thought it was a play that should have been made," Van Horn said. "And I think it will be made 9 out of 10 times. But it wasn't today."

Vanderbilt made it 3-0 in the fifth inning on a two-out, two-run single by Dominic Keegan that got through the infield up the middle against Evan Taylor.

"I thought Wiggins threw the ball really well," Van Horn said. "He really did a nice job for us. We didn't do anything for him, honestly."

Tate Kolwyke's two-run home run off Taylor in the sixth inning pushed the Commodores' lead to 5-0.

In the conclusion Sunday of the series' second matchup, Will McEntire pitched three scoreless innings for the Razorbacks to finish the game -- which they led 8-6 when it was suspended -- and Jalen Battles hit a two-run home run in the seventh inning.

"That was a real good job by our guys coming back," Van Horn said. "You're always worried when you get a game delayed and you're winning it, and it seems like momentum is going your way."

Vanderbilt, which won Friday night's opener 9-6 in 10 innings, became the first visiting SEC team to take a series at Arkansas since Ole Miss in 2019.

The Razorbacks won 13 consecutive series at home against SEC teams, including beating Ole Miss later in the 2019 season in a super regional.

"It was a great run," Van Horn said. "You never want to see it end because you always want to win at home. You want to win everywhere, but we've won a lot of games here."

Van Horn thanked the fans who stayed through the lengthy weather delay.

"It wasn't a packed house, but it felt like it," he said. "That was as loud as I've heard them the first couple innings, especially with the number of people who were here.

"We really appreciate that. Disappointed that we didn't give them a little more to cheer for that second game."