Hot Springs weighs upkeep at Arkansas School for Mathematics, Sciences and the Arts 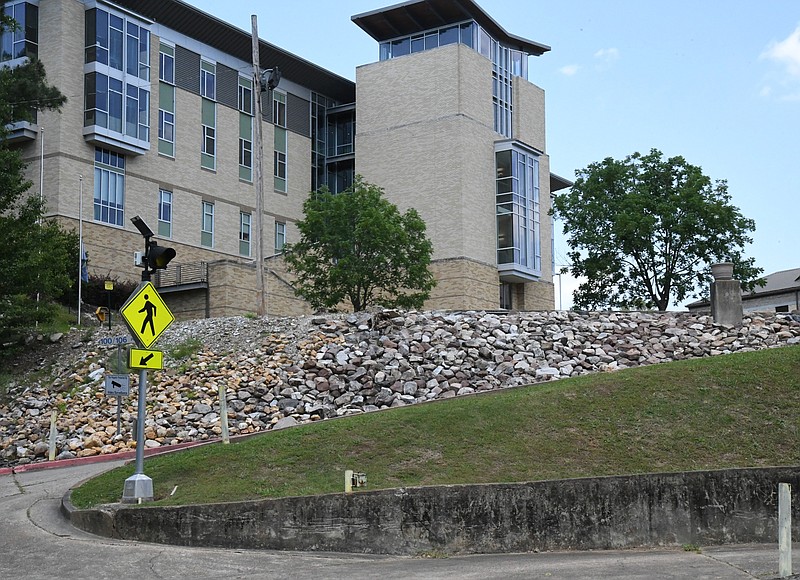 ASMSA where new construction is planned.

HOT SPRINGS -- The Arkansas School for Mathematics, Sciences and the Arts wants the city of Hot Springs to donate land for a new administration building, but the city doesn't want to continue shouldering the financial burden of maintaining buildings on the ASMSA campus.

The land for the new building is on the same parcel as the old St. Joseph's Hospital complex and its chapel and convent. The city bought the complex, including 200 Whittington Ave., from St. Joseph's Regional Health Center for $300,000, according to the 1992 ordinance enabling the purchase. The city leased the land to the school the following year. It's been a month-to-month lease since 2004.

"For that period of time, the city and school have been going along essentially with a gentlemen's agreement," City Attorney Brian Albright told the Hot Springs Board Directors at its May 10 work session.

According to the cost report presented at the work session, from 2017 to 2021, the city committed $684,511 to the maintenance and operation of the hospital complex at 100 Whittington Ave. and the Academic and Administration Building at 200 Whittington, including $366,809 for two new elevators at 200 Whittington.

"The concern we have is it's been 30 years, and we've had the ongoing maintenance expenses," Mayor Pat McCabe told ASMSA Director Cory Alderdice.

A resolution authorizing the mayor to convey the land for the new administration building was pulled from the agenda of the board's May 3 business meeting amid unanswered questions about the school's timeline to assume ownership of 200 Whittington and vacate the hospital complex. The resolution isn't on the agenda for Tuesday night's business meeting.

Alderdice planned on presenting the resolution to the University of Arkansas board of trustees at its May 23 meeting. He's uncertain it can be placed back on the agenda, even if the city board put it back on its Tuesday night agenda.

"The trustees don't like last-minute items," he told the board, explaining that they won't accept the land transfer without the enabling resolution.

The city donated land for the school's $18.3 million Student Center at 153 Alumni Lane and $4.7 million Creativity and Innovation Complex at 220 Whittington. The 2010 nonbinding resolution that conveyed the 2.6 acres for the Student Center anticipated the school vacating the hospital complex by 2012. Upon notice of the vacation, the resolution said the city would have six months to start the demolition of the hospital.

"There was an expectation something was going to happen by Jan. 1, 2012, which has never come to fruition," Albright told the city board. "Here we are 10 years later still grappling with the same questions."