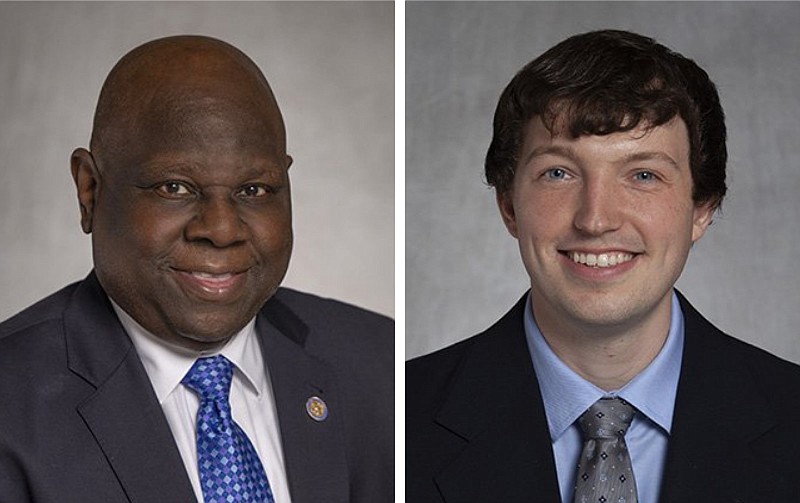 A political newcomer who was inspired to run for Arkansas House District 77 after watching what transpired in the legislature in 2021 faces an incumbent who has spent six terms in the House in the Democratic primary race.

Allen, 68, said he is running for re-election in House District 77, which covers parts of west-central and southwest Little Rock, because there is a lot of work he wants to finish. He mentioned education, health care and job recruitment among his priorities.

"All of these things are tied together," he said. "If a person can't read or write, if a person has a poor health status, then he or she will not be able to participate in the economic process. Everything starts with a good education."

"Nobody is going to outwork me," Allen said. "I might lose at some things, but you will not outwork me."

Smith, 28, said he decided to run after seeing "all the discriminatory laws" passed by the legislature in 2021, specifically mentioning laws that he viewed as anti-LGBTQ and "the attack on women's reproductive rights."

"I just felt like someone needed to stand up and defend those people that were being discriminated against, and that is really my main thing," said Smith, who works as a carhop at a Sonic Drive-In. "I believe that people should be respected regardless of their differences."

"I support equity," Smith added. "Everybody should have what they need. The things on my platform all align with each other. People need good education, people need good healthcare, people need a livable wage. Equity is what you will see from my campaign."

Smith acknowledges he doesn't have the experience Allen has, but he said he doesn't view that as a bad thing.

"Everybody has got to start somewhere," he said. "I have always been involved in different rallies, and I have helped a few campaigns, so people kind of know me. I am constantly involved, so I hope people look past the experience part of it."

Smith said his campaign being a door-to-door effort is exactly what separates him from Allen.

"One of the number one things I hear when going door to door is that they don't even know who their representative is," Smith said. "That is sad. I feel strongly that if you are going to represent people then you need to know what their concerns are. You need to be accessible.

When asked his position on abortion, Allen said, "I prefer not to comment on it."

Smith said he is fully pro-choice.

"I believe that decision should be between a woman, her doctor and her family," he said.

Allen, who is recovering from a battle with cancer, said health care is very important to him and that everyone should be entitled to good healthcare regardless of their sex, race or financial situation.

"Unfortunately we will always have people that don't have a job or don't have the resources, but they shouldn't be denied health care," he said. "If you look around us right now we are seeing too much of that. We are a better state than that."

Allen said the state has too many health care deserts in the rural areas but is hopeful that telemedicine can be an answer to some of those issues.

"Many of the people in the state of Arkansas don't have the transportation to get to the doctor's office, and that is a barrier," he said. "We need to find a way to reduce those barriers as much as possible."

"I really believe our current system isn't working," he said. "I think we need Medicaid for all. It has been 12 years since the Affordable Care Act, and yet medical debt is the number one cause of bankruptcies still?"

Allen said he is a big supporter of public school education and wants to eliminate barriers for teachers.

"Our teachers have to jump through a lot of hoops," he said. "They have to take test after test just to qualify to teach at the school system, and once they pass that exam and graduate they still have to pass more tests to go into the classroom and teach.

"We can get good teachers if we relax some of the standards, because many teachers who are straight from college don't have the funding to go take all these tests required of them."

Allen said even though he is a proponent of public schools, he supports those who choose to participate in school choice.

Smith said he believes the state should increase teacher pay.

Smith said he also wants to address crime issues within the district, and that one way to do that is by investing more resources.

"We need more mental health centers and we need to find the resources to help some of these communities," he said. "I believe if we had the right people at the table we could figure out these problems."

Allen said he wants to look at prevention programs for young people.

"There is an old saying that says when a person feels that the system has failed them, they will create their own system," he said. "We have to get to these young people before they fall through the cracks and end up in the Department of Corrections."

Allen said he considers himself a statesman and hopes to unite the General Assembly instead of divide it.

"I try to stay away from things that will divide us and I try to focus on things that will bring us together," he said. "We can always find a way to be divisive, but let's find something that we can work together on that is going to make Arkansas look good."

Smith said he will approach others with respect but will voice his opinion.

"I believe these communities deserve to be spoken for," he said. "We need to let their voices be heard no matter what happens. No matter if the governor or others don't agree with you, you have to stand strong and voice your opinion and be strong for your constituents."

Smith said he also believes the state is not as Republican as it seems.

"Arkansas is actually one of the lowest voter count states in the U.S. and we had one of the highest mail-in rejection rates in 2020, so I am just saying we might not be a red state but more like a non-voter participation state," he said. "We still have to work with Republicans in the legislature, and I will treat people with respect.

"We can all find common ground. There is more that unites us than divides us."