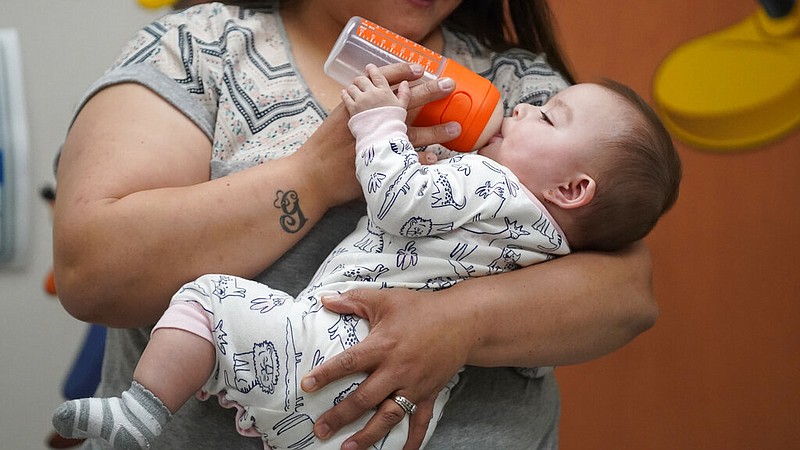 Elizabeth Amador bottle-feeds her daughter Destinee, 9 months, at the Ellis R. Shipp Public Health Center in West Valley City, Utah, on Thursday, May 12, 2022. A nationwide baby formula shortage has forced parents into online groups to swap and sell to each other to keep their babies fed. (AP/Rick Bowmer)

U.S. baby food shortages are driving some Americans to try to make baby formula themselves. With store shelves emptying, some desperate parents are turning to the internet for do-it-yourself recipes. But these homemade versions come with serious health risks, medical professionals and health officials say.

"Do not make your own formula at home," said Florida pediatrician Mona Amin. "As tempting as it can be, there's no safeguards that's safe, that it's nutritious."

Formula shortages have been a problem for parents since last year because of supply-chain disruptions, but stockpiles were further squeezed after Abbott Laboratories' nutrition unit recalled some of its products earlier this year, including top-selling brand Similac.

The scarcity is getting worse. Nationwide, the average out-of-stock rate for baby formula was 43% the week ending May 8, up from 31% in early April and 11% at the end of November, according to retail-tracking firm Datasembly.

Kristen Cochran, the mother of a five-month-old in South Carolina, checks websites multiple times a day for product restocks.

"Buying formula at this point is very much like winning the lottery," Cochran said in an email. "Wondering when you will be able to get it to feed your baby is not a great feeling."

The shortages are especially dire for low-income families. They typically can't afford to pay for shipping from retailers outside of their area. Those who rely on benefits can only use them to cover specific brands or container sizes. In many states, Abbott Nutrition is the sole contractor for those who get benefits through the Special Supplemental Nutrition Program for Women, Infants, and Children, known as WIC.

While some parents are relying on friends or family members out-of-state to send formula supplies or driving as much as four hours away trying to stock up, others are turning to social media for help. From Twitter to Facebook to TikTok, DIY recipes are popping up -- some more complex than others. One calls for more than a dozen ingredients, ranging from cod liver oil to liquid whey, while another simply suggests mixing milk with water. People are even hosting Zoom sessions showing parents and caregivers how to make their own recipes at home, and accepting donations for these tutorials.

Infant formula is the most regulated food product on the market. Commercial formulas are created to closely mimic human breast milk and are held to high regulatory standards to ensure infants have the nutrients they need. Homemade formulas don't have the same oversight, meaning it's much trickier to guarantee the proper nutrition profile with a do-it-yourself recipe. In fact, the Food and Drug Administration strongly advises against making formula at home.

One 2021 report from the U.S. Centers for Disease Control and Prevention illustrates the dangers of homemade formulas. A 4-month-old infant went into multiple episodes of cardiac arrest and suffered brain damage after he'd been fed a concoction made of sea moss, hemp seeds and coconut water for a month. Another 5-month-old exhibited breathing issues and had bone deficiencies.

Homemade formulas can also lead to contamination and hypocalcemia, or low calcium, according to the FDA.

Anyone who is scrambling for baby formula supplies should first contact their child's pediatrician, said Amin, as they can help parents or caregivers find formula or guide them through the process of switching to a different brand.

While it's safe for most infants to swap to other commercial brands, including generic ones, doing so is not always straightforward if they have health conditions that require specialized formulas. Some children may also have gas, discomfort or spit up when using a different brand, Amin said.

Babies over 12 months old can switch to cow's milk, but they shouldn't make the switch before that age, as it can lead to intestinal bleeding.

Although it may seem safer than homemade recipes, Amin also advised against diluting commercial formula to stretch supplies. "That is actually very dangerous to do because an over-diluted formula can cause electrolyte imbalances in children," she said.

Formula feeding is used by parents widely: By six months, only a quarter of infants are exclusively breastfed, according to the CDC.

Information for this article was contributed by Martine Paris of Bloomberg News.