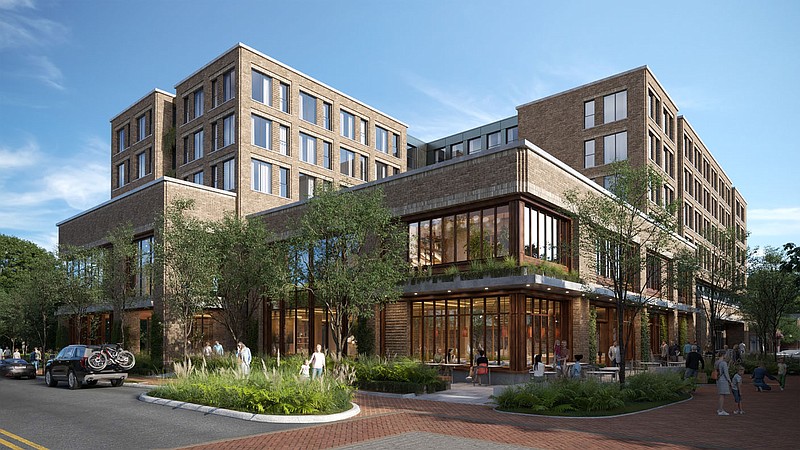 An artist?s rendering of a new hotel that will be built in downtown Bentonville. It will be 116,000 square feet and will have 142 rooms. Operation is set to begin in summer 2024.

BENTONVILLE -- Another lodging option is coming to downtown.

The independent hotel will be a 116,000-square-foot project that will include an event space, restaurant, bar, cafe, two retail spaces and 142 rooms. Cycling-specific amenities will include a bike valet, secure storage and a bike wash, according to a news release issued today by 4media group.

It will be built at the intersection of Southeast A Street and East Central Avenue, south of the historic Benton County Courthouse. The hotel, tentatively scheduled to open in summer 2024, will be on the former Tucker's Corner site.

The land at 200 E. Central Ave. is owned by Tucker's Corner LLC and was purchased for $2.55 million in October 2018, according to the Benton County Assessor's Office.

"We are thrilled to have the opportunity to build a hotel that uniquely reflects the endless outdoor adventures available in Northwest Arkansas and provide an unparalleled experience for our local community and guests," Jared Faciszewsk, chief executive officer of Blue Crane, a development and real estate company that will manage the project, said in the release.

Parking will be provided by a new parking structure half a block east of the hotel, developed through an agreement with the Off-Street Parking Development District. The municipal improvement district isn't governed by the city or county. County employees now use that area for parking.

The hotel's design expresses three principles that are essential components of the "Bentonville experience": reverence for nature, commitment to community values and support for balanced lifestyles, Blue Crane architect Ben Craig said in the release.

"Both exterior and interior spaces of the hotel tie project to place by the extensive use of local building materials and native plant species, applying down-to-earth sensibilities, and by filling those spaces with cultural events that reflect the project's setting at the gateway to the Ozarks," Craig said.

The hotel will be west of Dave Peel Park along the planned A Street Promenade, which will connect the yet-to-be-built Bentonville Commons, a planned plaza/activity space, at the south end to Lawrence Plaza, three blocks north. The estimated promenade cost is $13 million. There is no timeline for that project, said David Wright, city Parks and Recreation director.

"When people leave the hotel and get on the promenade, we want that to be a seamless connection," Wright said. "To get them from the hotel to the restaurants along the promenade."

The hotel will further promote economic activity in the bustling downtown district known for events like First Friday, the Farmers Market and more, according to the release.

The development was first announced in June 2018, according to the news release. A group led by Tom Walton announced plans to develop the southeast corner of the square into a 100-200 room full-service hotel, according to another news release issued at the time.

Bentonville currently is home to 24 hotels with a total of 2,209 rooms, said Aaron Mullins, director of communications and marketing for Visit Bentonville.

The city's population rose from 35,301 to 54,164 -- a growth rate of 53% -- from 2010 to 2020 and downtown has evolved into an eclectic mix of housing and businesses over that same period. More than 300 residential and commercial building permits have been issued just within a two-block area around the square in the last 10 years or so, said Jake Feemster, city division chief for Building and Fire Safety.

21c Museum Hotel, just northeast of the downtown square, opened in 2013. It's a 104-room boutique hotel, contemporary art museum, cultural center and home to The Hive restaurant, according to its website.

Hilton Hotels last year announced plans for The Motto Bentonville Downtown hotel on South Main Street. It will feature 175 rooms, an indoor bike garage, coffee bar, restaurant and an outdoor bar patio, according to a news release. It's scheduled to open in late 2023, according to Coyne PR, which represents Hilton.

Motto by Hilton is an urban, lifestyle hotel brand in prime locations globally, according to its website.

The Downtown Core comprises that area of the Bentonville square and extends those urban characteristics along the primary downtown street of Southwest A Street to Highway 102. The intent of this commercial zone is to maintain and expand the pedestrian oriented character of the square. The physical form is of an urban character with uses that promote retail and entertainment venues with upper story residential uses permitted. Mixed use is defined as vertical mixed use with commercial and retail on the first floor and office and residential on the upper floors.