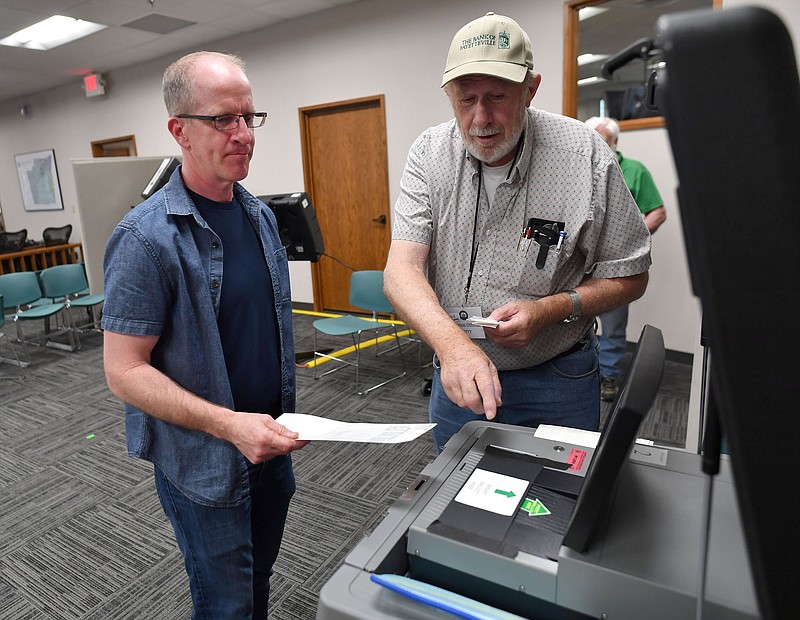 Joe Michie (left) of Fayetteville places his ballot in the ballot box Friday, May 13, 2022, with assistance from a poll worker who did not wish to be identified after early voting at the Washington County Courthouse in Fayetteville. (NWA Democrat-Gazette/Andy Shupe)

FAYETTEVILLE — Slow and steady is how election officials described the first few days of early voting for the May 24 primary election.

“I’m a little surprised it’s been this slow,” Kim Dennison, Benton County’s election coordinator, said Friday. “I’ve never seen anything quite like this. I’m a little worried what Election Day is going to be like. I haven’t heard any buzz or people talking about the election. We haven’t even voted 5,000 people out of the 175,000 registered voters.”

In Washington County, Jennifer Price, executive director for the county’s Election Commission, said early voting has gone smoothly with voter turnout hitting 3,139 by mid-morning Friday. Price said if that rate of voting holds steady it would be about a 2% turnout for the primary election.

There was no waiting line for voters at the Washington County Courthouse on Friday morning.

Todd Busbee of Fayetteville said he had come to the courthouse on other business and decided to vote after he arrived and saw there was no line.

“I was here doing my property assessing anyway, so I decided to vote,” Busbee said.

Busbee said he tries to take advantage of early voting whenever he can. He said his past experience of having to wait until Election Day to vote makes that an easy choice.

“It was horrible,” Busbee said of Election Day voting. “It needs to be easy. Early voting like today is simple and easy. There’s not a line of people. I like that.”

Busbee said he’s glad the county is taking advantage of new technologies in the voting process. He said a new check-in process where poll workers can scan an Arkansas driver’s license to call up a voter’s registration information adds to the ease of voting while enhancing security.

“Voter fraud is not what some people have said it is,” Busbee said. “This is very secure.”

Jim Hunt of Fayetteville echoed some of Busbee’s observations about early voting.

“You don’t have the lines,” Hunt said. “I’ve studied the folks who are running and know who I’m going to vote for, so it’s quick and easy. It really beats the old days where you had to vote on paper ballots with a pencil. You sat down at a table and people next to you could see what you were doing.”

Early voting in Sebastian County was slow as well, and slightly behind the pace of 2018, according to Meghan Hassler, election coordinator. Hassler said she had thought voters might be more interested with a couple of sales tax issues on the ballot but that hasn’t been the case in the first week.

Hassler said early voting typically begins with a high number on the first day then slows through the next several days of early voting. She said the last Friday of early voting and the Monday before Election Day usually see a higher voter turnout.

“It’s been smooth so far, nothing more than minor problems we were able to get fixed quickly,” he said.

Coleman said there were about 1,200 votes cast in the first four days of early voting this year. He said he didn’t have any daily records for the 2018 early voting. Coleman said Crawford County has about 35,000 registered voters.

23. Registered voters can cast their ballots at any vote center in the county they are registered in. Voters must present an accepted form of identification. Documents and identification cards that will be accepted as verification of voter registration include but are not limited to:

Tom Sissom can be reached by email at tsissom@nwadg.com or on Twitter @NWATom.