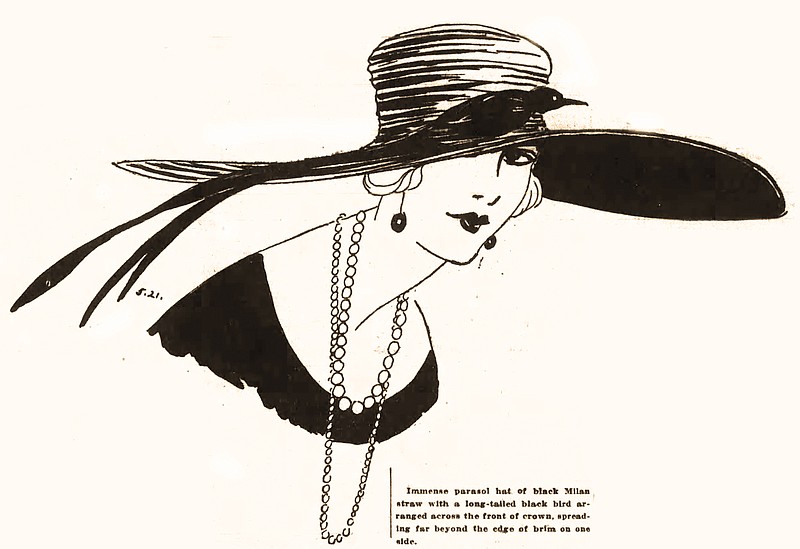 Immense parasol hat of black Milan straw with a long-tailed black bird arranged across the front of the crown, spreading far beyond the edge of the brim on one side. From the May 21, 1922, Arkansas Gazette. (Democrat-Gazette archives)

Imagine the difficulties of life 100 years ago today.

No WaterPic, no windshield wipers, no central heat and air. 1922 made up what it lacked in comfy footwear with asbestos: asbestos everywhere. And hookworms. And even though the times had turned against them, corsets.

And hats. Today, our friend the hat is worn on a voluntary basis and admired as a smart precaution everywhere it goes, especially at church. But in 1922, uncapped heads were judged severely. The age and appearance of the hat were read as evidence of good or bad character.

One needed a new hat for every season, and that hat needed a rack, a rest and often its own bandbox. Enterprising types were always looking for an opportunity to steal one's hat.

Worse was the expense endured by devotees of the "correct" hat — the hat in style. How harshly incorrect hats were criticized can be sensed from weekly fashion reports that the Arkansas Gazette presented to female readers of its Sunday edition.

For delightful disdain and sniffiness, it's tough to top the prose of "Anne Rittenhouse." Rittenhouse was the pen-name of Harry-dele Hallmark (1867-1932). Her clever parents were Harry and Adele. A former fashion editor of The New York Times, she wrote for the McClure Newspaper Syndicate and eventually for McCall's magazine.

Here's some of her information from 1922 about the very last word in millinery gear. The essay "The horizon is the only limit to the new wide brimmed hats" appeared in the Gazette on May 21 that year.

"Verily," she begins, "no hat is too large for the head."

Some women, though, were oafishly clinging to their frumpy, small hats:

"The woman who bravely ventures forth in an oblong turban, or one in the style the Queen of England adopts needs all her bravery for the act. She is looked at with the kind of astonishment the world still gives to wrinkled White Russian boots on the street in the middle of the day."

Unstylishly turbaned women compounded their crime ... she does make it sound like a bit of a crime ... by failing to tilt those too-small turbans so they covered the eyebrows. Whatever their size, hats all must be pulled down over the eyebrows.

"That's the least they can do in the name of style," she sniffs. "Lady Astor set a bad example with her famous three-cornered hat by pushing it back from her brows, showing an expanse of bare forehead, which is a severe trial for any face. Not even youth unwrinkled, because unthinking, can carry off this angle of the headgear with entire satisfaction to the beholder.

"If the middle-aged will wear their small hats off the forehead, giving emphasis to lines and revealing the age of the eyes — and no woman willingly and with direct intention does this thing — at least let them soften the bare skin with tendrils or waves of hair."

One must not distress observers, she says: "It is not a question of coming and going fashion. It is a question of softening the face, treating it with sweet consideration.

"There are women who do not even pull some hair down about the ears. They viciously stick the hard head covering down on the head, ignoring the fact that hair is given to help us look more alluringly human."

She was not a fan of a recent craze for Russian peasant styles.

"It is strange therefore, that along with the undoubted Russian influence in all forms of dress this spring, there should come sailing over the horizon the type of hat which we associate with strawberries, and such Gargantuan strawberries. Why this connection? Because the islands of Great Britain seem to sprout both the fruit and the immense sunshade hat. We feel as though we're going to play tennis with the young curate when we put on one of them. ...

"If a young lady wears a parasol effect on her head of yellow straw, and trims it with groups of yellow buttercups, she is bound to appear like a 19th-century garden party girl. In those days, however, they wore a fringe or a water wave of hair to show between the hat and eyes. Today it is different. The hat is worn to conceal the eyebrows."

Again, ladies, please, the eyebrows must be concealed. Rittenhouse continues ...

"There is another type of immense hat which is not Victorian. It is a black straw with a crown as large as a turban trimmed with a wicked and rakish black bird, boasting a tail out of all proportion to its fellows. This said tail strikes a path across the front of the hat and flies into space beyond the limits of the owner's shoulders.

"Yet both these hats, expressing a different philosophy are worn, copied and praised."

How has the Russian influence afflicted hats? Rittenhouse says, "The moment a milliner suggests a Russian hat for the new spring frock the woman says petulantly that she is a-weary of pointed crowns; that they were run to death two years ago; that such hats were sold in the wholesale centers for next to nothing and were worn by hundreds who looked next to nothing.

"The milliner meets this argument with a superior smile, a kind of mystery smile as one who is about to open a Jack-in-the-box to a child. She shows the new Russian hat by Suzanna Talbot of Paris, who has given hats to the obscure corners of all the Gopher Prairies on this continent. Not that the fastidious Suzanne knew it. But neither did we. So that's even.

"Harking back to history, she has taken the hats of men and women who have never ceased to wear clothes that are elemental in coloring, clothes which are intended to offset the dullness of the landscape in which they are doomed to live, and yet as bright as the clothes of southern Russia, where people are like children in their love of lively colors, of buoyant and noisy dancing, of strident fashions.

"Talbot takes the cap from such costumery of ancient Russia and touches it with sufficient French delicacy to transform it into something that it is well to wear. One who has not looked at old Russian prints such as are found in the volumes of [Auguste] Racinet does not realize that this new species of Liberty cap was the universal headgear of those who may have served under Peter the Great. ...

"Caution is the cry when any of these imitations of Slavic finery are adopted. Lovely they are to look at, lovely on the stage under the colored lights, but often debatable on the head of the average woman going about her daily business. The trouble of a young and imitative country like ours is that its people are eager to absorb, but often unconscious of the occasions for which the originals were worn. The coat of a bridegroom at a Cossack wedding is not exactly proper for a shopping tour of Main Street at 11 a.m. on a hot day."

I wish I could fit the entire diatribe into this space. Perhaps some other day.

In the meantime, Harry-dele's dry wit was on display during testimony she gave as Anne Rittenhouse in 1925 before the U.S. House of Representatives' Committee on Patents. Sample quote: "I have just come home from Paris. I live in Georgia; I am a southerner and work in New York, as most southerners do."

You can read the rest here arkansasonline.com/516anne.

Print Headline: Hats off to the women of the past