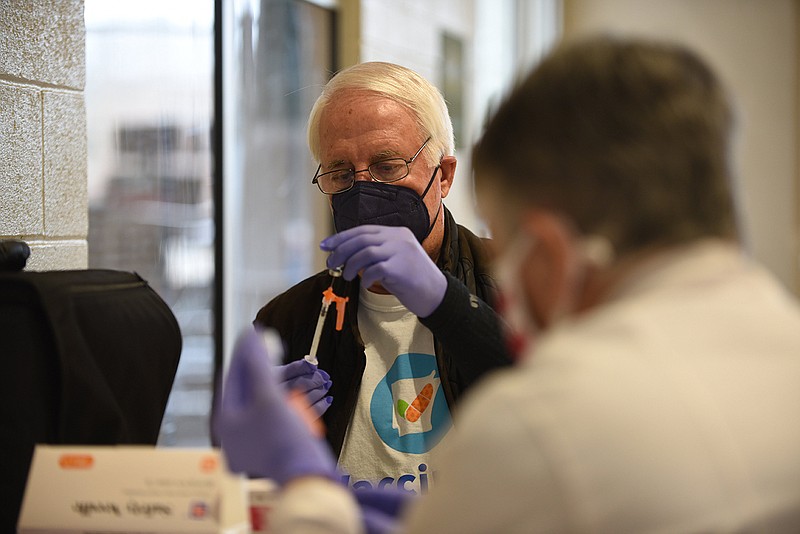 An uptick in Arkansas' new coronavirus cases continued Monday as the reported number of people hospitalized in the state with covid-19 rose back up to its highest level in almost a week.

The state's death toll from the virus, as tracked by the Arkansas Department of Health, rose by two, to 11,418.

While smaller by 66 than the increase on Sunday, it was larger by 12 than the one the previous Monday.

Already at its highest level since the week ending March 28, the average daily increase in the case count over a rolling seven-day period rose to 210, which was up from an average of 176 a day the previous week.

After reaching a new two-month high a day earlier, however, the number of cases in the state that were considered active fell by 93, to 2,493, as recoveries outnumbered newly reported infections.

State Epidemiologist Mike Cima said it appeared that a gradual upward trend in the state's new cases that began a few days after Easter was continuing.

However, he noted that the state's new case numbers and other metrics remain low compared with other points in the pandemic.

That's in contrast to some states, particularly in the Northeast, where new cases have risen more significantly.

"It's been a gradual trek upwards to where they're at now, but they've gotten to a point now where it's fairly high," Cima said.

According to the U.S. Centers for Disease Control and Prevention, Arkansas' 1,456 cases over the seven days ending Sunday translated to a rate of 48.2 per 100,000 residents.

That was tied with Montana's rate for the lowest in the country among states that had reported a full week's worth of data.

Nationwide, an uptick in new cases over the past few weeks has been blamed on a more-transmissible version of the omicron variant known as BA.2.12.1.

According to CDC estimates updated last week, the strain accounted for 42.6% of the country's cases the week ending May 7, up from 33% the previous week.

"It's possible that we just haven't really borne the brunt of what that variant is going to bring," Cima said of Arkansas' coronavirus metrics.

But he added that even in states where the increase in new cases has been larger, daily hospitalizations and deaths "really aren't changing appreciably."

"They have gone up in certain areas, and hospitalizations in particular may have gone up slightly, but it's not at such a burdensome level as to tax the health care system like what we saw in January and February," Cima said.

The number people reported to be hospitalized in the Arkansas with covid-19 rose Monday by eight, to 52, after falling the previous three days.

The number of the state's virus patients reported to be on ventilators remained for a second day at eight, its lowest level since March 25, 2020.

After falling the previous three days, the number who were reported to be in intensive care rose by one, to 19.

At its hospitals in Little Rock and Springdale, Arkansas Children's had four covid-19 patients on Monday, the same number as on Thursday, spokeswoman Hilary DeMillo said.

Pulaski County had the most new cases, 18, on Monday, followed by Benton County with nine and Faulkner County with six.

The Health Department's tally of vaccine doses that had been administered rose by 168, which was larger by 46 than the record-low daily increase a week earlier.

The count of people receiving the vaccine for the first time rose by 46, which was up by 13 from the increase in first doses a week earlier.

Growing for the seventh day in a row, the average number of total doses administered each day over a rolling seven-day period rose to 1,445, which was up from just over 1,200 a day the previous week.

The average for first doses rose to 328.

According to the CDC, 66.9% of Arkansans had received at least one dose as of Monday, up from 66.8% a day earlier.

The percentage who were fully vaccinated remained at 54.6%.

Of those who were fully vaccinated, the percentage who had received a booster dose remained at 39.9%.

Among the states and District of Columbia, Arkansas ranked 37th in the percentage of its residents who had received at least one dose.

In the percentage who were fully vaccinated, it was roughly tied with Tennessee for 46th, ahead of Louisiana, Mississippi, Alabama and Wyoming.

Nationally, 77.7% of people had received at least one dose, and 66.4% were fully vaccinated.

Of the fully vaccinated population nationally, 46.4% had received a booster dose.