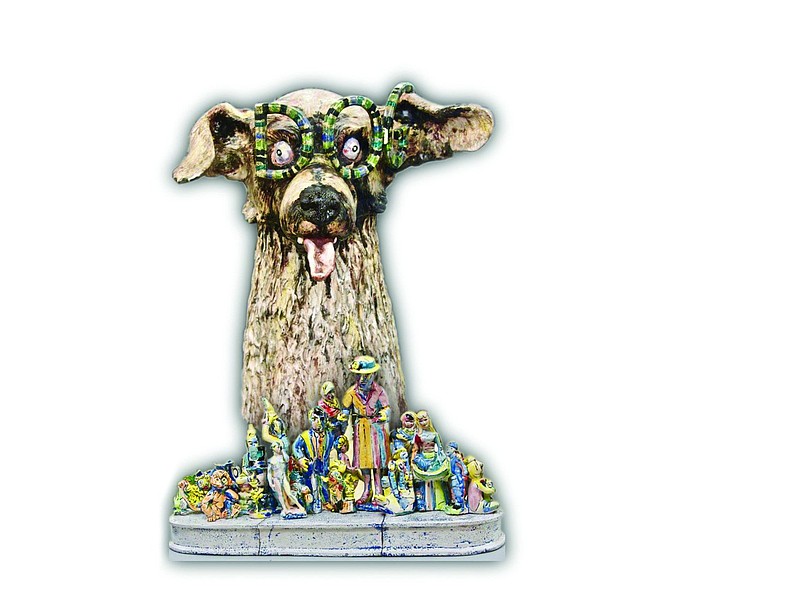 “D-O-G,” by Jack Earl, is at John Gould Fletcher Library. (Special to the Democrat-Gazette/Marcia Schnedler)

When the Arkansas Arts Center closed in 2019, to be reborn this fall as the Arkansas Museum of Fine Arts in a dazzling new complex, not all of its vast collection went into stored hibernation.

Nearly 10% of the museum's 1,500 contemporary crafts objects were dispersed on loan to 15 Central Arkansas Library System locations. This stash of three-dimensional art continues to serve as an added attraction for librarygoers browsing the stacks or checking out books, while the new museum in MacArthur Park targets reopening before 2022 ends.

When the objects were moved, a definition of "craft" was provided: "The word historically refers to objects made from traditional materials — ceramic, glass, fiber, metal and wood, including both functional ware and sculptural objects." Such works "invite us to consider texture, form and function, as well as the role of the maker and the processes used to create the object."

Visitors to the Main Library, 100 S. Rock St., are greeted as they head for the elevators or first-floor shelves by a craft piece that is clearly sculptural rather than functional.

After Frey's death in 2014, a New York Times critic wrote that the artist "managed to translate her extensive knowledge of art history into Bunyanesque monuments of endearing klutziness. They have a particularly American cool." The clusters of multicolored figures in her work at the Main Library are intriguing enough that repeated perusals can bring fresh discoveries.

The works by Wendy Maruyama, titled "Rohwer: The Tag Project" and "Jerome: The Tag Project," are festooned with thousands of the labels. Each tag bears the name of a Japanese-American interned by federal order at the two Arkansas camps.

An upbeat assortment of crafts on loan can be seen at Hillary Rodham Clinton Children's Library and Learning Center, 4800 W. 10th St. Dozens of whimsical objects from the museum's past "Toys Designed by Artists" exhibitions figure to amuse adults as well as youngsters.

At the base of the Clinton branch's staircase, temporarily closed to the public, visitors can peer down to see Judy Onofrio's enigmatic 1995 "Just Pretending." Informally known as "The Mermaid," it incorporates found objects that range from bottle caps to marbles to garnish the aquatic damsel as she confronts a fork-tongued snake.

The viewing angle from above provides a novel perspective.

Outdoor sculptures at the Clinton site also aim to engage youngsters. Lurking amid tall grass is an aluminum alligator that appears to be reading. The creation by Russell Lemond is titled "Allie's Favorite Book." 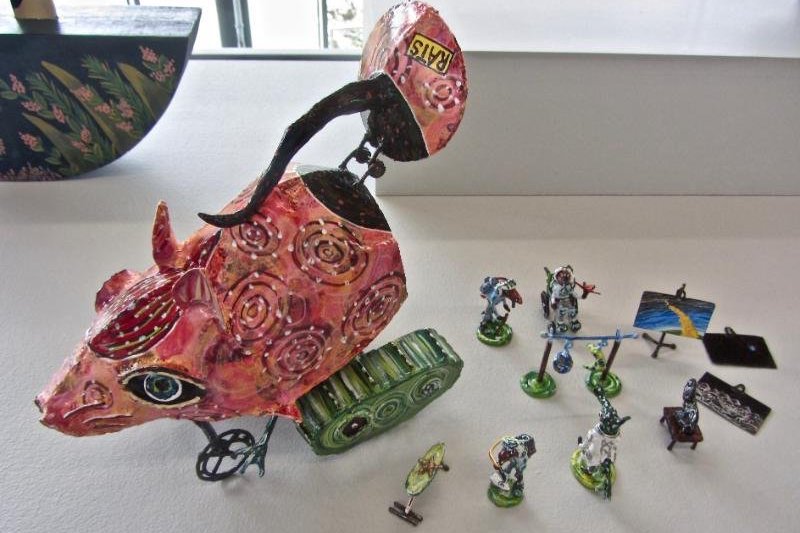 “RATS (Retired Astronaut Transfiguration Station),” by Bill Reid, is at Hillary Rodham Clinton Children’s Library and Learning Center. (Special to the Democrat-Gazette/Marcia Schnedler)
The Mad Hatter's tea party from "Alice in Wonderland" comes to mind at the Roosevelt Thompson Library, 38 Rahling Circle, where more than a dozen teapots in whimsical designs and shapes are on display.

The Dee Brown Library, 6325 Baseline Road, features loaned sculptures made from wood, along with ceramics baked in wood-fired kilns.

Especially striking is Margaret Keelan's "Young Girl With Moths," a ceramic piece crafted to appear carved from a branch.

At the John Gould Fletcher Library, 823 N. Buchanan St., jollity beams from Jack Earl's ceramic "D-O-G," a pooch wearing oversize eyeglasses spelling that word. They might be reading glasses, because the works displayed at Fletcher aim to "illustrate the power of language and the written word." That primary mission of libraries everywhere has taken on extra energy via the craft objects now on display across the CALS system.

Central Arkansas Library System facilities are normally open Monday-Saturday, with hours varying by day of the week. Details on the Main Library and each branch can be found at cals.org.