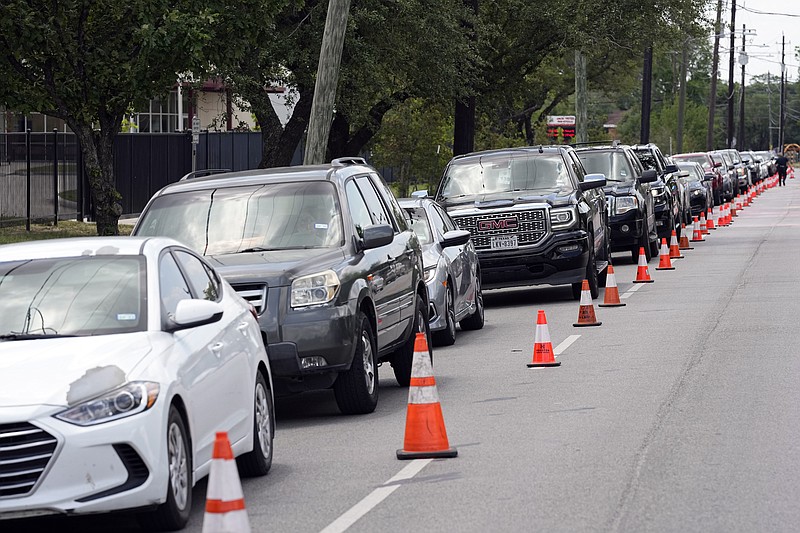 People wait in line during a baby formula drive to help with the baby formula shortage Saturday, May 14, 2022, in Houston. Parents seeking baby formula are running into bare supermarket and pharmacy shelves in part because of ongoing supply disruptions and a recent safety recall. (AP Photo/David J. Phillip)

WASHINGTON -- Baby formula maker Abbott said Monday that it has reached an agreement with U.S. health regulators to restart production at its largest domestic factory, though it will be well over a month before any new products ship from the site to help alleviate the national shortage facing parents.

Abbott did not immediately detail the terms of the agreement with the Food and Drug Administration, which has been investigating safety concerns at the Sturgis, Mich., plant since early this year. The consent decree amounts to a legally binding agreement between the FDA and the company on steps needed to reopen the factory.

An FDA spokeswoman did not immediately respond to a request for comment on the announcement Monday evening.

After production resumes, Abbott said it will take between six to eight weeks before new products begin arriving in stores. The company didn't set a timeline to restart production.

Abbott's plant came under scrutiny early this year after the FDA began investigating four bacterial infections among infants who consumed powdered formula from the plant. Two of the babies died.

In February, the company halted production and recalled several brands of powdered formula, squeezing supplies that had already been tightened by supply chain disruptions and stockpiling during covid-19. The shortage has led retailers such as CVS and Walgreen's to limit how many containers customers can purchase per visit.

Abbott is one of just four companies that produce roughly 90% of U.S. formula, and its brands account for nearly half that market.

After a six-week inspection, FDA investigators published a list of problems in March, including lax safety and sanitary standards and a history of bacterial contamination in several parts of the plant.

Chicago-based Abbott has emphasized that its products have not been directly linked to the bacterial infections in children. Samples of the bacteria found at its plant did not match the strains collected from the babies by federal investigators. The company has repeatedly stated it is ready to resume manufacturing, pending an FDA decision.

Former FDA officials say fixing the type of problems uncovered at Abbott's plant takes time, and infant formula facilities receive more scrutiny than other food facilities. Companies need to exhaustively clean the facility and equipment, retrain staff, repeatedly test and document that there is no contamination.

On Monday, FDA Commissioner Robert Califf told ABC News that an announcement was forthcoming about importing baby formula from abroad. The key issue is making sure the instructions for the formula are in languages that mothers and caregivers can understand, he noted.

Califf said he was "comfortable" with Abbott Nutrition's prediction that its plant could be up and running again in about two weeks.

"That's entirely within the realm of possibility and I think quite likely."

Califf, who has six grandchildren including one who is on baby formula, said the government is working hard to ease the shortage but wants to make sure any formula on the market is safe.

"I know how important this is to parents and the entire FDA staff is entirely focused on this," Califf said. "But we also have to be safe."

Califf also said the FDA would investigate why it took three months from when a whistleblower first complained to when the agency sent inspectors in January to investigate possible contamination issues at the plant.

"We always want to be as fast as we can possibly be while also being diligent," Califf said.

Pediatricians say baby formulas produced in Canada and Europe are roughly equivalent to those in the U.S. But traditionally, 98% of the infant formula supply in the U.S. is made domestically. Companies seeking to enter the U.S. face several major hurdles, including rigorous research and manufacturing standards imposed by the FDA.

San Diego father Steven Davis has faced challenges finding formula for his medically fragile daughter, who was on an Abbott formula but has had to switch with the recall and subsequent shortages in other brands.

Zoie Davis was born 19 months ago with no kidneys, a rare life-threatening condition that requires dialysis and a feeding tube until she weighs enough for a kidney transplant. She's 4 pounds shy of that milestone, said Davis, a mortgage lender and his daughter's caretaker.

"Her life is dependent on her weight gain," he said.

Davis said he used an organic brand from overseas until costs and customs hurdles made that too difficult. Friends and strangers from out of state have sent him other brands, but each time she switches requires more blood tests and monitoring, Davis said.

Despite her challenges, Zoie is walking, talking and "doing pretty good" on other developmental milestones, Davis said.

Information for this article was contributed by Zeke Miller, Matthew Perrone and Lindsey Tanner of The Associated Press; and by Dave Goldiner of The New York Daily News. 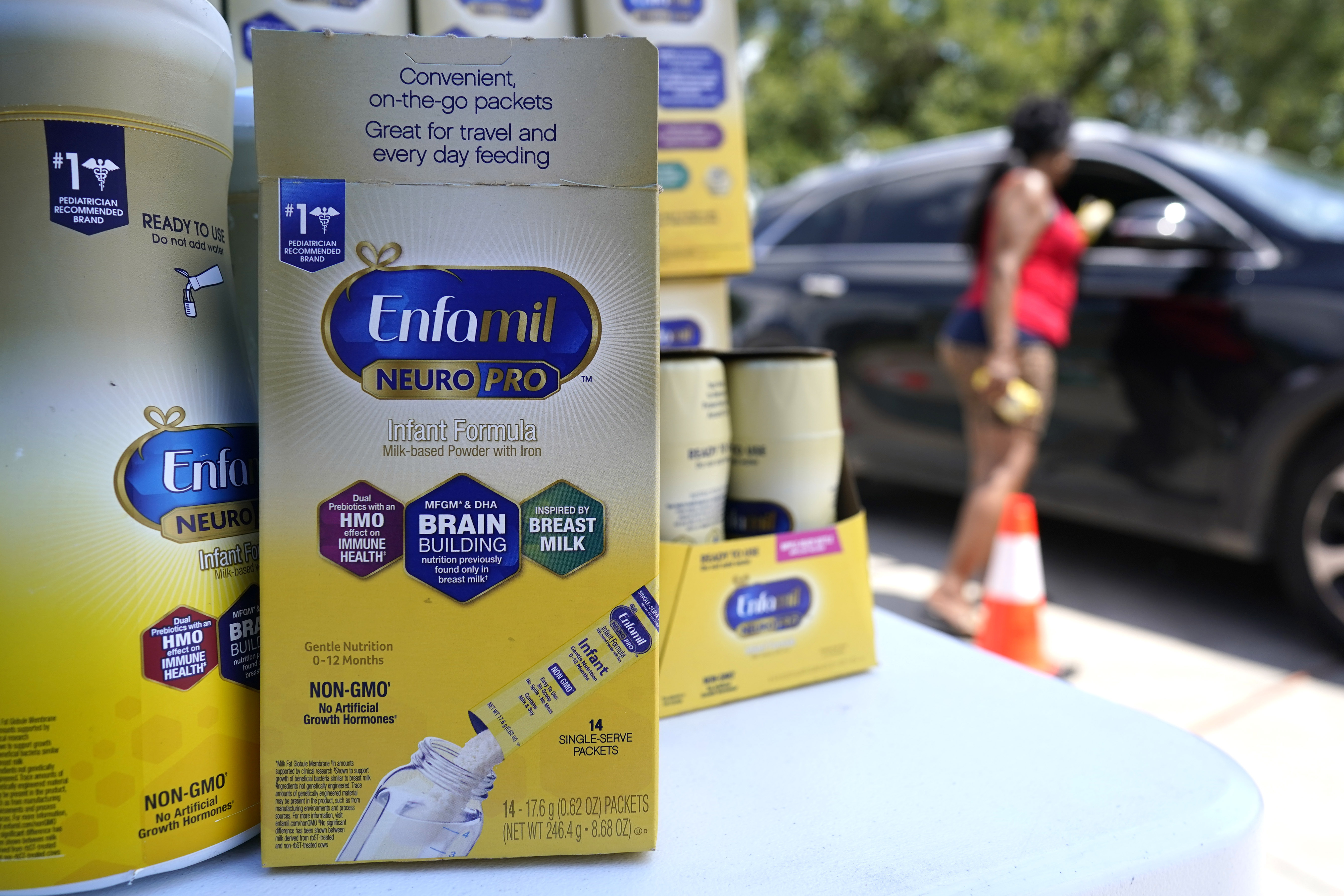 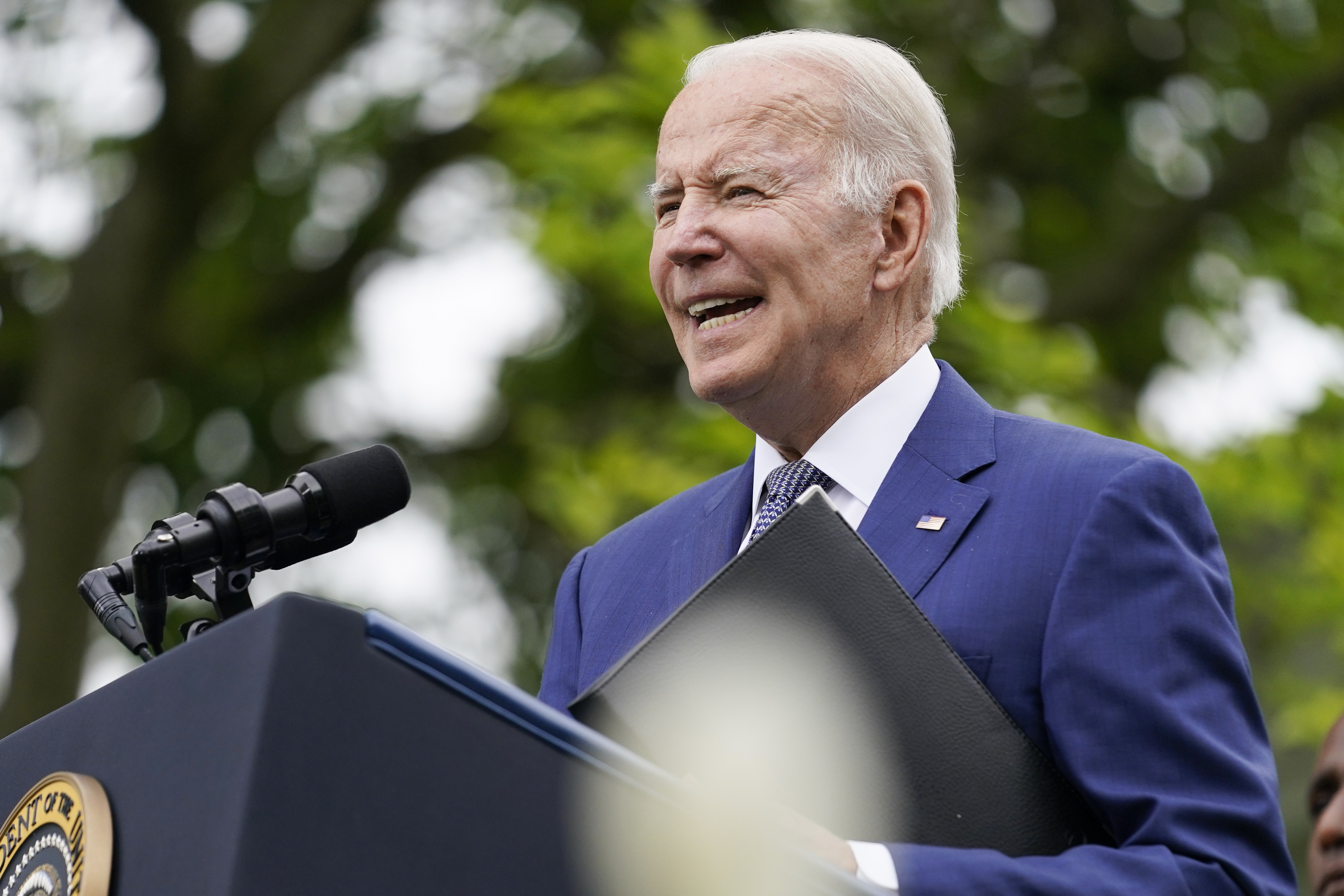 President Joe Biden speaks in the Rose Garden of the White House in Washington, Friday, May 13, 2022, during an event to highlight state and local leaders who are investing American Rescue Plan funding. (AP Photo/Andrew Harnik) 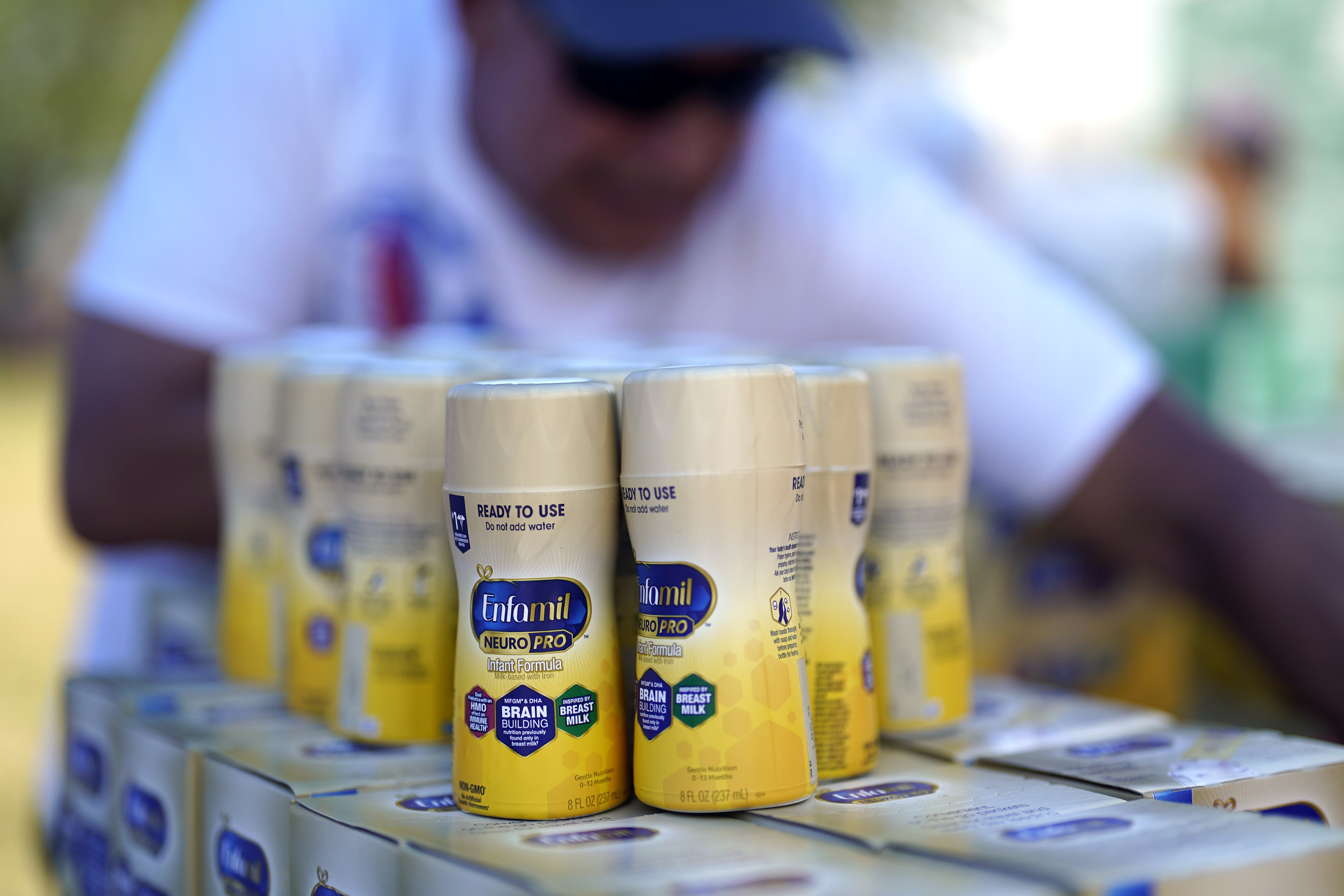 Infant formula is stacked on a table during a baby formula drive to help with the shortage Saturday, May 14, 2022, in Houston. Parents seeking baby formula are running into bare supermarket and pharmacy shelves in part because of ongoing supply disruptions and a recent safety recall. (AP Photo/David J. Phillip) 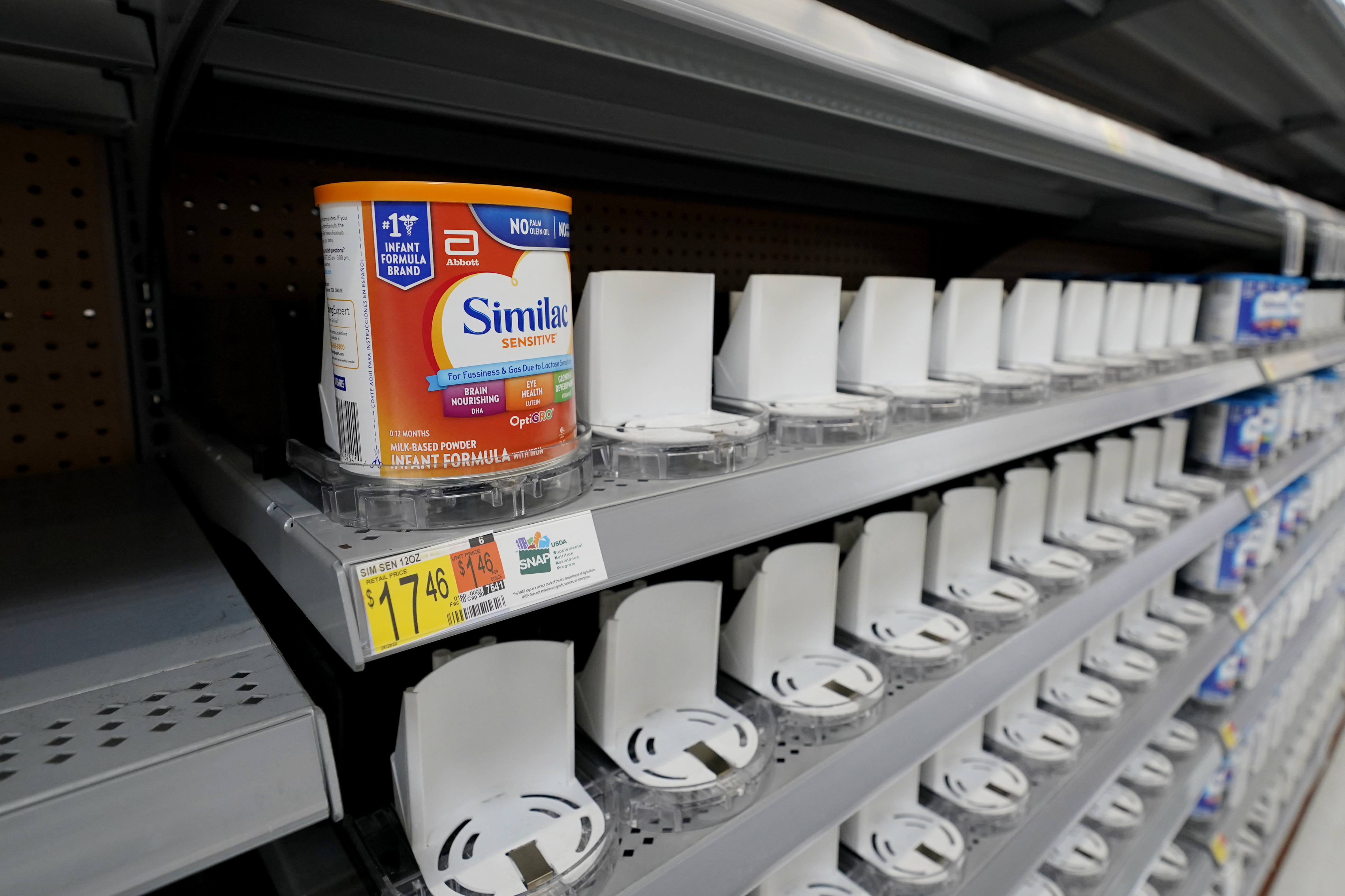 Shelves typically stocked with baby formula sit mostly empty at a store in San Antonio, Tuesday, May 10, 2022. Parents across the U.S. are scrambling to find baby formula because supply disruptions and a massive safety recall have swept many leading brands off store shelves. (AP Photo/Eric Gay)