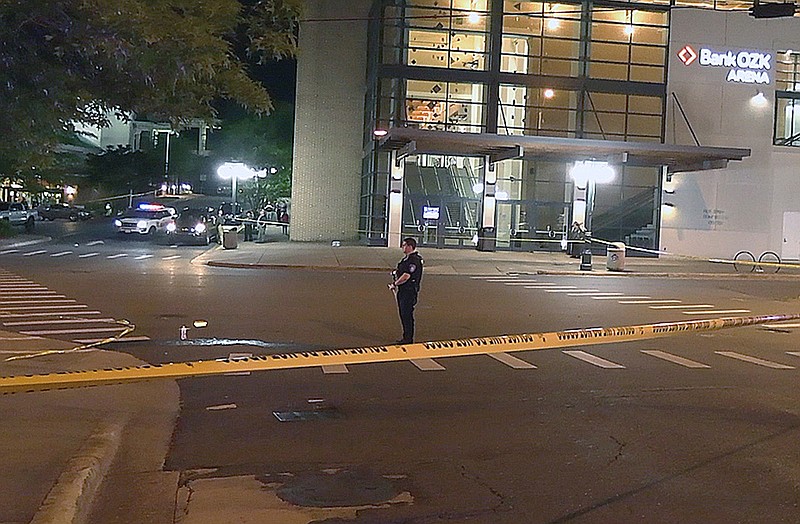 Crime scene tape surrounds the scene at the intersection of Convention Boulevard and Laurel Street, outside the Hot Springs Convention Center, Thursday night in the aftermath of a shooting in which four people were injured by gunfire, with one victim later dying. (The Sentinel-Record/Andrew Mobley)

HOT SPRINGS -- The man accused of shooting four people, killing one, Thursday night outside the Hot Springs Convention Center after a local graduation ceremony left a blood trail after being hit by return fire from officers, contributing to his eventual arrest, an affidavit states.

Charles Johnson Jr., 25, who lists a Potter Street address, was taken into custody around 4:15 p.m. Saturday at a local hospital after being treated for injuries. He is charged with first-degree murder, punishable by up to life in prison, for the death of one victim, identified as 39-year-old Michael Jordan, and three counts of first-degree battery, each punishable by up to 20 years, for the reportedly non-life-threatening injuries suffered by the other three shooting victims.

Johnson, who was previously convicted of felony second-degree assault Dec. 6, 2016, in Weld County, Colo., also was charged with a felony count of possession of a firearm by certain persons, punishable by up to 20 years.

Johnson was booked into the Garland County jail about 6:15 p.m. Saturday, where he remained in custody Monday on a $2 million bond.

According to a probable cause affidavit, Hot Springs police and other agencies, including the Garland County Sheriff's Office and Arkansas State Police, responded at around 9 p.m. Thursday to the area of the Convention Center regarding a fight.

There was "a very large crowd in and around the convention center" gathered following the Hot Springs World Class High School graduation, which was held at the center from 7 p.m. to 9 p.m.

As officers were breaking up the fight and dispersing the crowd, which was primarily gathered at the intersection of Convention Boulevard and Laurel Street, bodycam footage from police officers reportedly showed a Black male wearing a light-colored, long-sleeved shirt and light-colored shorts walk within feet of five officers.

The male raised a handgun and began firing, first striking a Black male later identified as Jordan. The male began to run away and continued to fire his weapon, the affidavit said.

At that point, officers "engaged the male by shooting at him" as he continued to flee on foot, through the crowd and into the rear parking lot of the convention center. The suspect was struck by gunfire and left a trail of blood from the initial scene to the back parking lot "near the area where a white SUV was seen leaving the scene."

Numerous witnesses were interviewed, and all described the shooter as a tall Black male wearing a gray shirt and gray shorts.

Jordan was transported to a local hospital where he died from his injuries. Three others, a male and two females, also were treated at local hospitals for non-life-threatening gunshot wounds they suffered "to their lower extremities."

Johnson, suffering from multiple gunshot wounds, was transported to a local hospital by private vehicle and surveillance video at the hospital reportedly showed him arriving in a white SUV, later identified as a 2011 Kia Sorento.

Johnson did not have a shirt on when he arrived at the emergency room but was wearing light gray shorts over a darker pair of shorts. The Sorento was located in the parking lot, and a light-colored shirt and blood could be seen inside the vehicle through the windows.

The affidavit notes the clothing "matched what was seen on the bodycam footage as well as what was described by witnesses" at the scene. Warrants for Johnson's arrest were later prepared and served on him at the hospital.