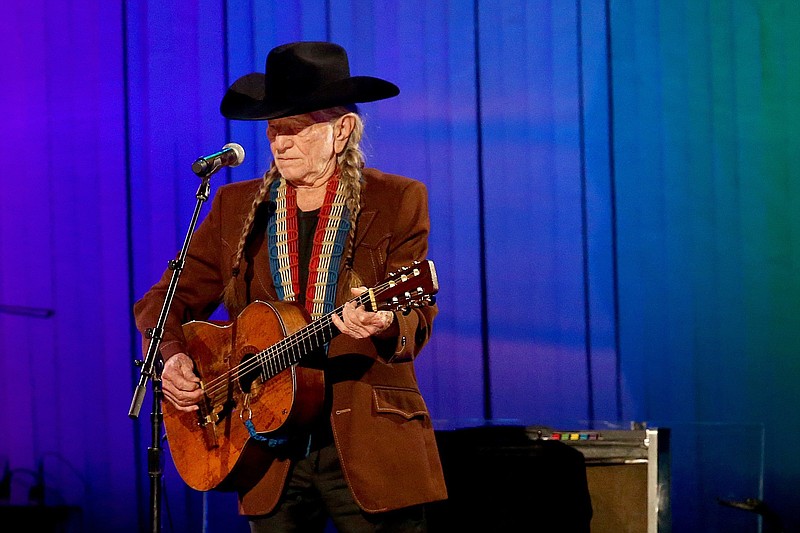 Willie Nelson performs in a 2019 file photo. At the age of 89, Nelson has embarked on another meandering concert tour to promote his new album. He plays Little Rock on May 31; El Dorado on June 22; and Rogers on July 1. (Getty Images/TNS/Terry Wyatt)

Country music legend Willie Nelson turned 89 on April 29, and he keeps strumming along as a performer.

To coincide with his birthday, the 10-time Grammy Award winner released his new album, "A Beautiful Time." On May 27, he starts a three-night stand at Whitewater Amphitheater in New Braunfels, Texas. On May 31, Nelson, son Lukas, Promise of the ­Real and Charley Crockett perform at the First Security Amphitheater in Little Rock.

At 89, here's how the iconic Nelson rolls on.

Nelson was at that vulnerable age for covid-19 to be problematic. Nelson has emphysema, which is caused by long-term exposure to irritants in the air, including smoke from marijuana, tobacco, dust and chemical fumes.

He has been a proponent of covid-19 vaccinations and, in 2021, received his first dose of the Moderna vaccine. At some of his shows last summer, Nelson required concert attendees to have protective face coverings, a negative test result or proof of vaccination.

In February, he canceled several of his forthcoming indoor concerts, including a March appearance at Billy Bob's Texas in Fort Worth, "until the covid situation improves," according to his publicist.

"I don't want to do a show anywhere at any time where there's a danger of somebody getting sick," Nelson said in a recorded Q-and-A with Andy Langer of SXSW, the cultural festival in Austin, Texas.

DEATH IN THE FAMILY

In March, Nelson mourned the death of his older sister, Bobbie, whose prowess as a piano player powered his band. She was 91.

In an interview with Austin music writer Michael Corcoran, Nelson offered high praise to his older sister — whom he always called "little sister" — and what she had meant for his one-of-a-kind sound:

"There's just no way to explain how lucky I am to have a good musician in the family. Whenever I've needed a piano player, she's been right there. Whenever our band plays, Sister Bobbie is the best musician on the stage."

On the occasion of his 88th birthday, Bobbie shared childhood memories of her brother on SiriusXM "Willie's Roadhouse."

Last month, Nelson paid tribute to his sister at a concert at Luck Ranch, performing in his Family Band flanked by sons Lukas Nelson and Micah Nelson.

ARE YOUR SHOES LEGAL?

Nelson's lighter side as a pitchman and former toker came out with his Super Bowl commercials for Skechers shoes.

In a 30-second ad, Nelson was decked out in a "Legalize" T-shirt and urged the decriminalization of Skechers shoes. When the ad's director told him the shoes were already legal, Nelson feigned confusion, replying: "They feel so good I just assumed The Man made them illegal."

ON THE ROAD AGAIN

After canceling those local shows because of covid-19, Nelson is making it up to his North Texas fans in July. That's when Willie Nelson and Family will headline the Outlaw Music Festival Tour 2022.

He'll make a stop on July 2 at the Dos Equis Pavilion at Fair Park in Dallas. The 19-show tour gets underway on June 24 in St. Louis. On June 22, Nelson and family will play MAD Amphitheater in El Dorado; and on July 1, Nelson brings the Outlaw Music Festival tour to the Walmart AMP in Rogers.

Nelson's Dallas appearance, the fifth on the Outlaw Music Festival Tour, will also include Jason Isbell and the 400 Unit, Brothers Osborne, Charley Crockett, Steve Earle and the Dukes, and Allison Russell.

"I'm glad to get back out," he told Jimmy Fallon on "The Tonight Show" in June. "It's been over a year now, and I'm not sure I can remember 'Whiskey River.'"

Fallon wished him a belated happy 88th birthday and asked Nelson what kept him going strong.

"I wrote a new song the other day — 'Imagine what you want, and then get out of the way,'" he told Fallon.

"And I think the most important line is 'get out of the way.'"

(Jerry McLeod contributed to this report.)