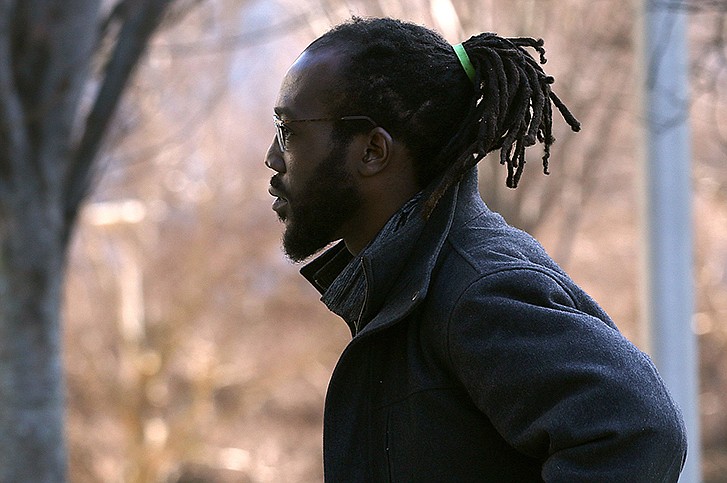 An activist indicted in 2020 on charges in connection with the firebombings of police cars in Central Arkansas asked in federal court Monday that all federal arson counts against him be dropped, claiming the amount of federal funding that goes to the affected departments is not sufficient enough for federal prosecutors to step in.

Mujera Benjamin Lung'aho, 31, of North Little Rock, challenged the federal government's authority to charge him with arson under federal statutes on the grounds that, although supported in part by federal funds, local and state police entities derive only a small percentage of funding from the federal government.

Lung'aho was indicted Oct. 6, 2020, on one count each of conspiracy to maliciously damage property by use of explosive, malicious use of an explosive device to damage property, and use of an incendiary device during a crime of violence.

A superseding indictment handed up by a federal grand jury Feb. 3, 2021, merged Lung'aho's case with those of four co-defendants -- Brittany Dawn Jeffrey, Emily Nowlin, Aline Espinosa-Villegas and Renea Goddard -- and added 13 new charges against him.

All five are accused in connection with damage inflicted on public property, including slashing tires, firebombing and attempting to firebomb police cars, that occurred during protests in 2020 in the wake of George Floyd's death at the hands of Minneapolis police. Floyd's killing touched off protests around the country that continued for months and have led some police departments to examine their use-of-force policies.

Of the five defendants, one has pleaded guilty to possession of an unregistered destructive device and the remaining four are scheduled to go to trial. That trial, scheduled to begin next week, will likely be postponed, Chief U.S. District Judge D. Price Marshall Jr. said Monday.

If convicted on any of the federal arson charges, Lung'aho could face a maximum penalty of life in prison.

He has pleaded innocent to all of the charges.

Lung'aho's attorney, Michael Kaiser of Little Rock, filed a motion last November to have all but three of the counts -- one count of making a destructive device and two counts of possession of an unregistered destructive device -- against his client dismissed.

Kaiser said Monday the case against his client raises important jurisdictional questions regarding how the U.S. decides to prosecute such cases.

He said under the reasoning of federal prosecutors, destruction of any property belonging to any entity that receives any portion of its funding from the federal government may be subject to federal prosecution regardless of whether the property destroyed was actually paid for with federal funds.

"The United States is dangerously close to arguing that something is federal just because it receives di minimus [minimal] funding from the federal government," Kaiser said.

Kaiser argued in a brief that the North Little Rock Police Department received federal funds of $37,170 in 2020 to purchase Tasers and first-aid equipment during fiscal 2020, amounting to 0.15% of the department's $24 million budget. The Little Rock Police Department, Kaiser argued, received two federal grants in 2020 totaling $832,968, which he said accounted for 1% of the department's $80.22 million annual budget.

He suggested that federal involvement in Lung'aho's case stemmed from claims of his involvement in the Black Lives Matter protests and his history as a local activist, and that federal statutes regarding federal jurisdiction "will be exercised only where the federal government has a substantial interest at stake and where substantial federal funds may be at risk."

"These are di minimus amounts that when we compare them to every other case that has been cited by the court, by us and by the government, they pale in comparison," Kaiser said. "This isn't a local agency that exists solely to distribute federal money, these are local police cars for local and state police agencies."

Assistant U.S. Attorney Stacy Williams argued that Congress has a vested interest in public safety at the local level and the destruction of the police cars falls under the jurisdiction of U.S. Code 18 Section 844, making bombing or burning federal property or property paid for in whole or in part a federal crime.

"In this case, Congress clearly has an interest in law enforcement -- local, state and federal -- we have concurrent jurisdiction. These entities ... receive federal funding yearly."

Williams said many of the grants police organizations receive, such as the Project Safe Neighborhoods grant, come from the U.S. Department of Justice, of which the U.S. attorney's office is a part.

"Is one dollar enough ... to allow Congress to then criminalize arson of any property owned by that institution [receiving federal funds]?" Judge Marshall asked Williams.

"It's not about a dollar amount," she answered. "That's irrelevant completely, the percentage of funding. It is if Congress is spending its money to further its objectives, and law enforcement is one of those objectives."

Marshall said after he considers the matter he will rule on Lung'aho's motion.

Following the hearing, Kaiser said the big question remained of why his client is charged federally with a crime that he said is typically considered to be under the state's jurisdiction.

"We all know the answer," Kaiser said. "It's because of when it was -- June of 2020 -- and who it was -- a prominent, been in the game a long time, not his first go around local activist who was especially active around that tumultuous time."

"I think think the government's position was 'trust us,'" he continued. "We'll use our discretion appropriately even though this statute -- under our argument -- would reach to even an agency that even a single dollar in federal funding ever. Just trust us, we'll use it properly."