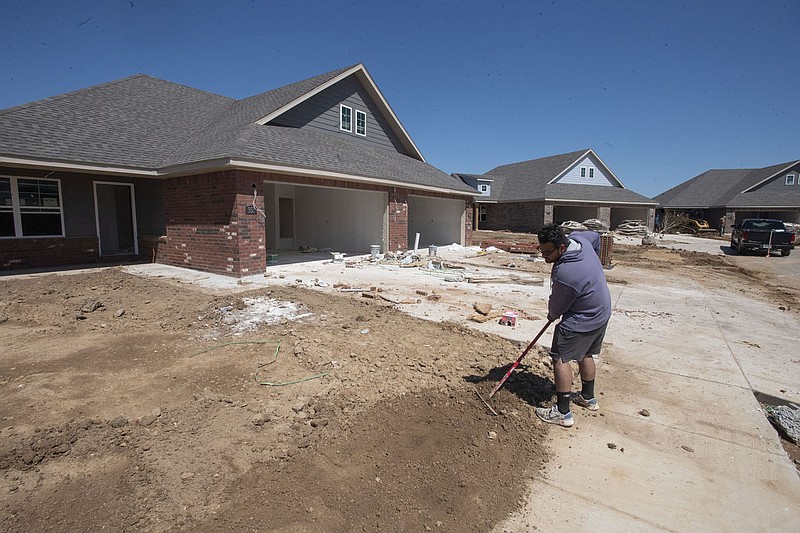 Hector Sandoval of Rogers works Monday May 16, 2022 at smoothing the yard at a newly constructed house in Farmington. Visit nwaonline.com/220517Daily/ for daily galleries. (NWA Democrat-Gazette/J.T. Wampler)

Northwest Arkansas is still among the top 10 on the U.S. News & World Report list of 2022-2023 Best Places to Live in the United States, but the region dropped from fourth to seventh.

The new list ranks the country's 150 most populous metropolitan areas. To make the top of the list, a place had to have good value, be a desirable place to live, and have a strong job market and a high quality of life.

"Fayetteville's affordability, job market, population growth due to net migration and other details are all strong, and get Fayetteville to No. 7. However, its drop to No. 7 from No. 4 last year is really about individual data points, as the places in the top 10 offer a lot of what people are looking for when they plan to move," Devon Thosby, U.S. News' real estate editor, said in response to why the Northwest Arkansas metro fell three places.

"Within the quality of life index, Fayetteville ranks No. 112 for well-being, which is a slight drop from where it was the year prior, which measures residents' overall happiness with where they live, based on the Sharecare Community Well-Being Index," Thosby said.

Sharecare's Community Well-Being Index evaluates health risk across 10 domains: five domains to represent individual health risk and an additional five to understand the underlying social circumstances in which individuals are born, live, work and play, according to their website.

The Sharecare Community Well-Being Index was developed in partnership with Boston University School of Public Health and is updated annually for metro areas across the country. The index is based on responses from more than 3 million surveys and 600-plus social determinants of health.

Overall, the highest-ranking metros have commonalities that included high percentages of individuals who indicate they have enough money to do what they want; high percentages of individuals who indicate their city is the perfect place for them; lower levels of depression risk; and lower levels of chronic conditions such as diabetes and heart attacks than the lowest-ranked metros, according to Sharecare.

Arkansas ranks 49 out of 50 states for well-being, according to the last results available.

The region has been in the top 10 best places to live, as judged by the magazine, since 2016.

"Northwest Arkansas' consistent recognition as one of the best places to live in the U.S. is a testament to the decades of collaborative efforts to improve the region's economy and quality of life," said Nelson Peacock, president and CEO of the Northwest Arkansas Council, a group of business and civic leaders.

"As the region continues to grow, we must develop and attract talent to create the jobs of the future while managing the challenges associated with population growth, including housing affordability, increased congestion and ensuring all are welcome and included."

Huntsville, Ala., knocked Boulder, Colo., down three positions to capture the No. 1 ranking, rising from the third position last year due to its strong housing affordability and high quality of life, although its desirability score was on the lower side of the 150 places ranked.

Austin, Texas, dropped out of the top 10.

"Much of the shakeup we see at the top of this year's ranking is a result of changing preferences," Thosby said in a news release. "People moving across the country today are putting more emphasis on affordability and quality of life than on the job market, which in many ways takes a back seat as remote work options have become more standard."

This year, U.S. News added air quality as a factor in its quality of life index, as Americans increasingly consider environmental factors before making a major move.

U.S. News determined the 2022-2023 Best Places to Live based on methodology that factored in the job market, value, quality of life, desirability and net migration ratings. They were determined in part using a public survey of thousands of individuals throughout the U.S. to find out what qualities they consider important in a place to live. The methodology also factors in data from the U.S. Census Bureau, the FBI, Sharecare, the Bureau of Labor Statistics and the U.S. News rankings of the high schools and hospitals.