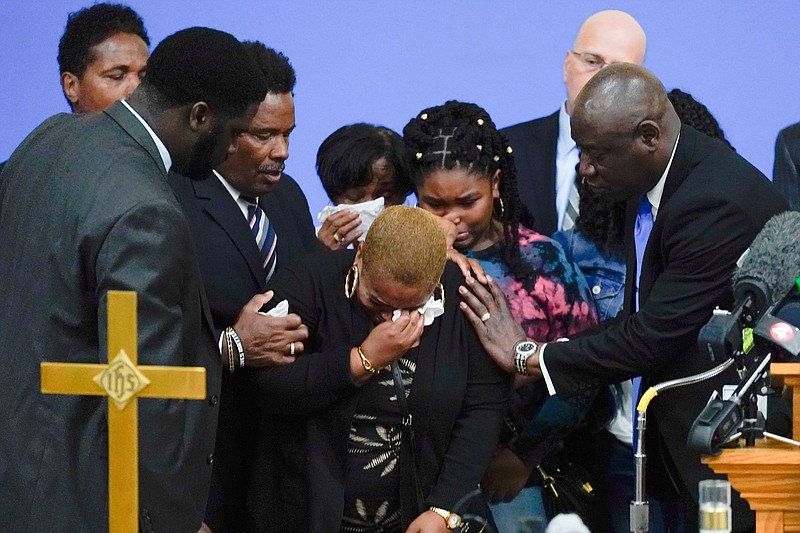 Tiffany Whitfield, a granddaughter of Ruth Whitfield, a victim of shooting at a supermarket, is overwhelmed with emotion during a news conference in Buffalo, N.Y., Monday, May 16, 2022. (AP Photo/Matt Rourke)

Payton Gendron, 18, began posting threads on the social media platform Discord about body armor and guns, and last month made provocative remarks about federal law enforcement, the FBI agent in charge for Buffalo, Stephen Belongia, said on a call between law enforcement officials and private-sector and university partners. The Associated Press obtained a recording of the call.

Meanwhile, Buffalo Police Commissioner Joseph Gramaglia told CNN that Gendron planned to keep on killing if he had escaped the scene and even talked about shooting up another store.

"He was going to get in his car and continue to drive down Jefferson Avenue and continue doing the same thing," Gramaglia said.

The commissioner's account was similar to portions of a racist 180-page document, purportedly written by Gendron, that said the assault was intended to terrorize all nonwhite, non-Christian people and get them to leave the country.

Federal authorities were working to confirm the document's authenticity and federal prosecutors said they are contemplating hate crime charges.

Messages were left with Gendron's attorneys Monday. No one answered the door at his family's home in the morning, and relatives did not respond to messages.

At the White House, President Joe Biden, who planned a visit today to Buffalo, paid tribute to one of the victims, security guard and retired police officer Aaron Salter.

Salter fired repeatedly at the attacker, striking his armor-plated vest at least once before being shot and killed. Biden said Salter "gave his life trying to save others."

Authorities said that in addition to the 10 Black people killed, three people were wounded: one Black, two white.