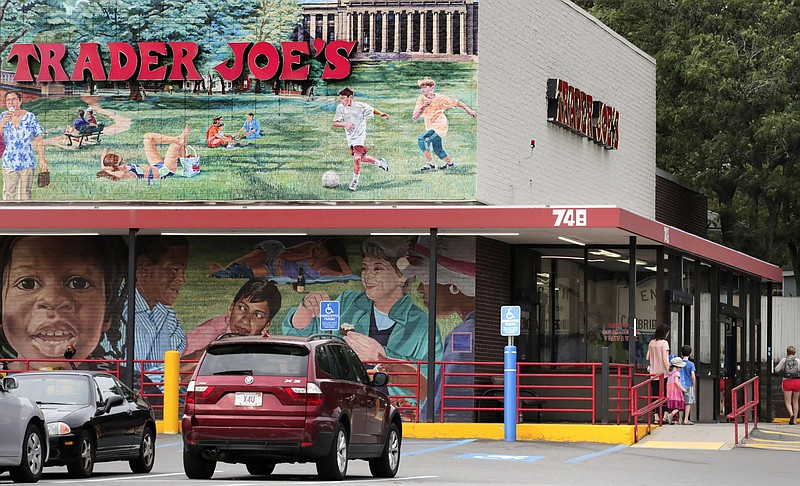 Customers walk to a Trader Joe's market, Aug. 13, 2019, in Cambridge, Mass. Employees of a Trader Joe's grocery store in Hadley, Massachusetts have joined the surge of food service and retail workers nationwide trying to join a union to better their working conditions and benefits. (AP Photo/Charles Krupa, File)

Employees are seeking to unionize at a Trader Joe's grocery store in western Massachusetts, joining a nationwide surge of labor organizing among retail and food service workers.

Organizers at the store in Hadley sent an open letter to company CEO Dan Bane dated Saturday citing concerns about pay, benefits and safety. They asked for a union election "without interference or obstruction."

Workers across the country, including multiple Starbucks locations and an Amazon warehouse in New York, have successfully unionized in recent months. And last week, workers at a Target store in Christiansburg, Va., filed paperwork with federal labor regulators to hold a union election.

It's also not the first time Trader Joe's workers have talked about forming a union. At the start of the pandemic, some workers who were concerned about safety discussed organizing. But those efforts ultimately fizzled under pressure from management, who in a letter to workers said that unions "drive discontent."

"Since that letter arrived in our mailboxes, Trader Joe's has continued to slash our benefits, as our wages stagnate and our safety concerns go unaddressed," the Hadley workers said in their letter to Bane. "A union is the only way to protect and improve our pay and benefits. The company's actions have made this clear."

Maeg Yosef, a union organizer who's worked for 18 years at the Hadley store, said the company has cut contributions to employee retirement plans -- from the equivalent of 15% of an employee's annual pay down to nothing -- since she started there.

"A lot of us have made a career with the company, and planning for retirement is important to us," she said.

The loss of benefits is a major concern of many workers who have recently launched unionization efforts, said Christine O'Brien, a professor of business law at Boston College's Carroll School of Management.

"That's a ripe situation for organizing, any time you take away benefits and employees feel a loss of control," O'Brien said.

About two-thirds of the Hadley store's nearly 100 crew members support the union, Yosef said. Their letter was presented to the store's manager, who promised a fair vote, but the organizers hadn't heard from the company headquarters in Monrovia, Calif., as of Monday, she said.

Trader Joe's, when asked for a response to the union organizers' letter to Bane, referred to a note sent to workers at the Hadley store by a store manager promising a fair union election.

"I understand that there are some legal steps that those Crew who want to hold a vote need to follow before it can occur, and they control the timing," the manager's note said. "You have my promise that we will not delay this process in any way.

"I believe our store is a great place to work and our compensation, benefits and working conditions are the best in the grocery business. But what really matters is what you believe. Whether or not to sign a petition to unionize or vote in favor of a union is your decision to make."

The Hadley workers are organizing under the name Trader Joe's United, which if successful would be an independent union, the grocery chain's first. They organized "with the same instinctive teamwork we use every day to break pallets, work the load, bag groceries, and care for our customers," their letter to the CEO said.

Union representation petitions increased 57% from Oct. 1 through March 31, according to the National Labor Relations Board.

Even though unionization by Trader Joe's workers at the start of the pandemic failed, labor conditions have changed under the Biden administration and National Labor Relations Board General Counsel Jennifer Abbruzzo, said O'Brien, the Boston College professor.

"She's much more pro-union and that's going to work in favor of the Trader Joe's workers," she said.

But, the fact that the Hadley Trader Joe's organizers are not affiliated with a larger, more established union that is more familiar with the organizing process could act as a detriment, O'Brien said.