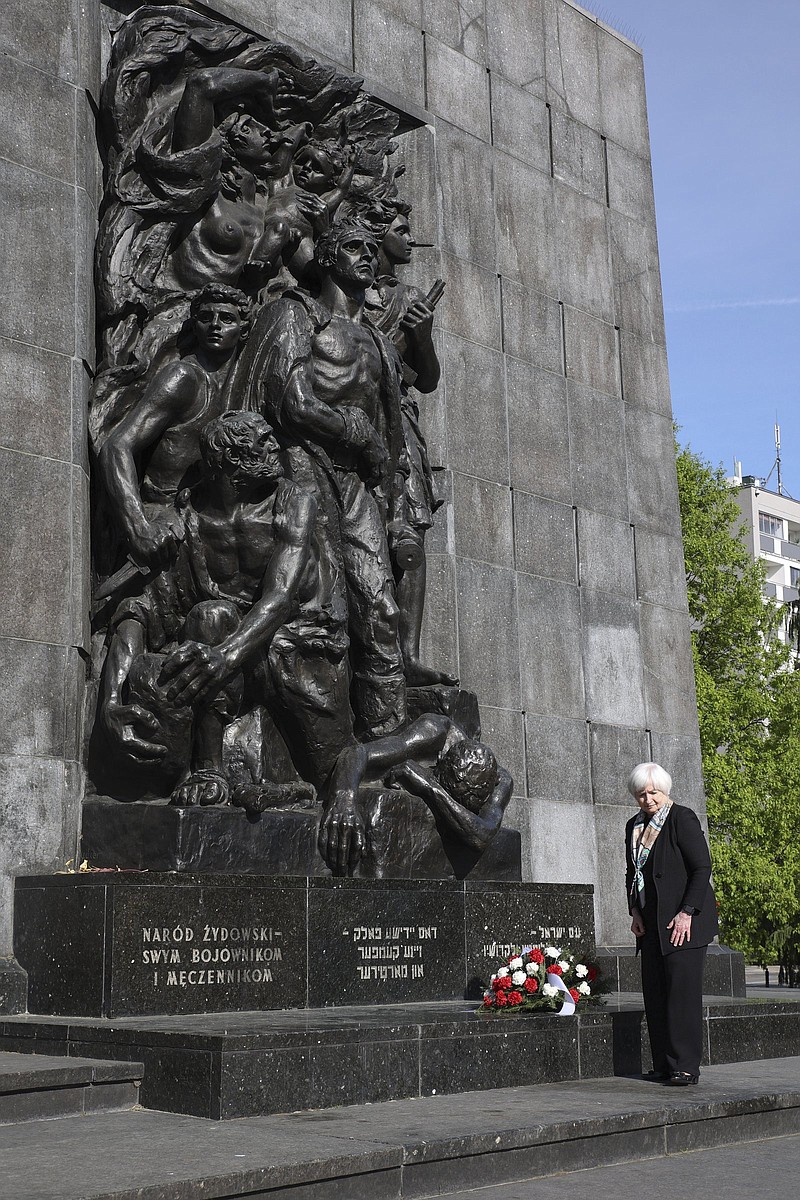 WARSAW, Poland -- U.S. Treasury Secretary Janet Yellen on Monday met with Ukrainian refugees and urged the need to confront Russian brutality as she visited Poland ahead of a meeting of finance ministers for the Group of Seven leading economies.

Yellen applauded Poland for helping refugees fleeing the fighting and working with neighboring countries to find ways to get Ukraine's wheat and other critical food supplies to the world. She thanked them for responding to "rising food insecurity" exacerbated by the war.

"The devastation in Ukraine in the past months reminds us not to take our next meal for granted, and how quickly events can take a turn for the worse," Yellen said at a visit to the World Central Kitchen site in Warsaw.

She met with refugees from Ukraine who are running the kitchen and said she will release an action plan later this week to address the global food crisis threatening parts of the developing world.

The conflict's disruption of wheat, barley, sunflower oil and other staples that normally flow from Ukraine and Russia has further raised already high food prices worldwide. Countries in Africa, the Middle East and parts of Asia that rely on those affordable supplies face the risks of food insecurity and unrest.

"Poland is of an opinion that Russia should be made responsible for all damage incurred on Ukrainian territory," Morawiecki's office said in a statement.

Yellen also vowed to work with Poland on pressing forward with a global minimum tax of 15% on multinational corporations, which is meant to target tax havens, the Treasury Department said.

"This is our common denominator, that we have with the United States, meaning to put limits on the functioning of such places where business people run and don't pay tax in the European Union or in other countries in the world," Polish government spokesman Piotr Mueller said.

Poland has blocked the tax meant to deter global companies from stashing profits in countries where they pay little or no taxes. The tax got final approval from more than 130 countries at a meeting of the Group of 20 economies in October, but Polish officials have questioned whether the levy will actually apply to online giants. Polish officials have also expressed concern that the two parts of the tax agreement are moving ahead at different paces, as well as trepidation about the impact that raising its tax rate will have on its economy at a time when the country is absorbing waves of Ukrainian refugees.

On Monday, Yellen pressed Polish officials to let the process move ahead, making clear that the tax deal continues to be a priority of the United States. Yellen, speaking after the meetings, described the conversations as "frank" and said she told her counterparts that the United States believes that the tax agreement is in Poland's economic interests.

"We strongly believe it's in the interest of Poland to be part of this," Yellen said, explaining that there continue to be technical differences that need to be worked out. "We're hopeful that they will come on board and be able to see their way clear in the not too distant future with the deal."

She added: "Certainly there's interest and they're thinking very hard about it."

Negotiators from around the world have been working for months to resolve technical details of the agreement, such as what kinds of income would be subject to the new taxes and how the deal would be enforced. Failure to finalize the agreement would likely mean the further proliferation of the digital services taxes that European countries have imposed on American technology giants, much to the dismay of those firms and the Biden administration, which has threatened to impose tariffs on nations that adopt their own levies.

Yellen also will stop in Brussels before attending the Group of Seven finance ministers' summit in Bonn, Germany, this week.

In Warsaw, she spoke at the POLIN Museum of the History of Polish Jews at the site of the World War II-era Warsaw Ghetto, mentioning her father's family left a town not far away for the United States.

"We must use the tools at our disposal to fight oppression. And that lesson must be applied today," she said. Russian President Vladimir "Putin's ongoing attacks on Ukraine require that we think about what we can do to confront brutality."

Information for this article was contributed by Monika Scislowska and Fatima Hussein of The Associated Press; and by Alan Rappeport and Liz Alderman of The New York Times.