Battle of Alberta is splitting allegiances across province 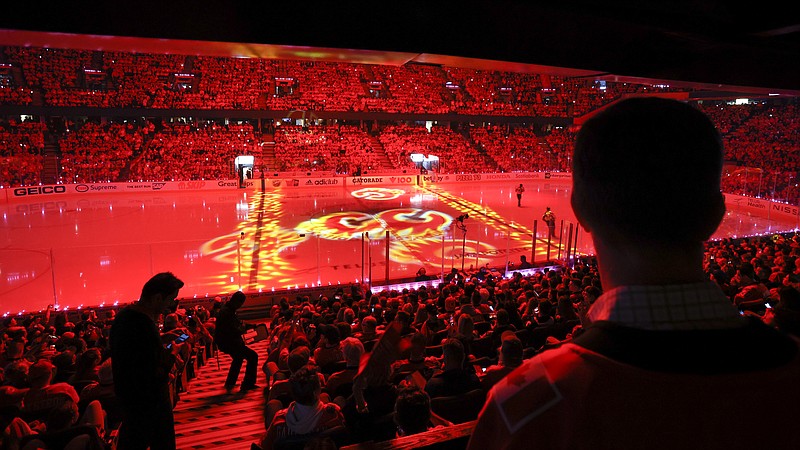 Calgary Flames fans wait for Game 1 of the team's NHL hockey first-round playoff series against the Dallas Stars on Tuesday, May 3, 2022, in Calgary, Alberta. (Jeff McIntosh/The Canadian Press via AP)

RED DEER, Alberta -- The old Crown and Anchor bar in Red Deer was famous for its line drawn down the middle when hosting fans during the Battle of Alberta playoff games of the late 1980s.

Calgary Flames fans on one side. Edmonton Oilers fans on the other.

NHL allegiances, after all, are split in the community of just over 100,000 people that sits just about halfway between the two cities on Highway 2, about 95 miles from each. The Flames host the Oilers in Game 1 to kick off the second round of the NHL playoffs tonight in a Battle of Alberta with stakes not seen in decades.

"To see both fan bases totally engaged in playoffs is something that has just never happened in a lot of people's lifetimes who are under the age of 40," said Merrick Sutter, the senior vice president of the minor-league Red Deer Rebels and nephew of Flames Coach Darryl Sutter. "We see it every day in Red Deer, just the sheer nature of being exactly in the middle."

Th Oilers and Flames have met five times in the postseason, but not in 31 years. Three of the series went seven games, and the Oilers won four of them.

"Really, every city from Fort McMurray in the north to Lethbridge in the south is going to benefit from the series -- the bars, the restaurants, the hospitality industry, the ability for people to come together and socialize ... and it couldn't come at a better time from that perspective," he told The Canadian Press. "People are just so eager to get out and be in person."

The mayor, by the way, is pulling for the Flames. He has a Calgary jersey and a hat signed by Flames legend Lanny McDonald.

"Being a good mayor, I also have a little Oilers fanfare to wear from time to time," he added with a laugh.

Sutter said allegiances in the Battle of Alberta have generational roots. His, of course, were forged in his family's long history with the Flames. His dad Brent, now owner, president and GM of the Rebels, coached the Flames for three seasons. Uncle Darryl's first coaching stint in Calgary was in 2003.

"Not many can understand, but there's not very many circumstances where you have two franchises with such a longstanding rivalry," he said. "This goes back to grandparents and parents, back in the '80s and whatnot. It's embedded. Now to be able to reignite it is special, but to me it's really about the younger people who have never seen that rivalry."

Troy Gillard, who does play-by-play of Rebels games, said Red Deer has unique connections to both teams. He believes the Oilers won some new fans when the club drafted Rebels center Ryan Nugent-Hopkins first overall in 2011.

"Even here at the Rebels, we're split pretty much 50/50. It's going to be a lot of fun around here the next couple weeks," Gillard said.

The 2022 playoffs are the first held in full arenas in Canada since the pandemic began. Red Deer was slammed by the omicron variant this past winter, prompting the cancellation of the world junior championships after just four days.

Now Red Deer bars are buzzing with anticipation after a couple of years of hard times.

"We're all very very excited, it's been a long time to have this kind of thing happen," said Brennen Wowk, an Oilers fan and owner of Bo's Bar & Stage. "Staff will be in jerseys of their choice, we'll be pouring lots of beer and have the volume on as loud as it can go."

Dallas Gaume, the GM of the Red Deer Minor Hockey Association, hopes the clash will help hockey registration numbers in Red Deer return to pre-pandemic numbers. There was no season in 2020-21 due to covid-19, and the number of returning players dropped by 7.5% this past winter.

"A lot of eyes are going to be on the province in the next two weeks, and I really think we're going to get some growth out of this," he said.

The city councils in Calgary and Edmonton have a friendly wager (losers wear face paint and jerseys of the winning team) and two elite Canadian soccer players also made a bet: Sam Adekugbe, who grew up in Calgary and plays in Turkey for Hatayspor, reached out to Alphonso Davies, a Bayern Munich star who grew up in Edmonton.

The loser has to donate $2,000 to the winning team's charity foundation and take a photo in their jersey.

Game 2 is Friday in Calgary before the series heads north to Edmonton for Games 3 and 4. The series winner meets either St. Louis or Colorado in the Western Conference Final. 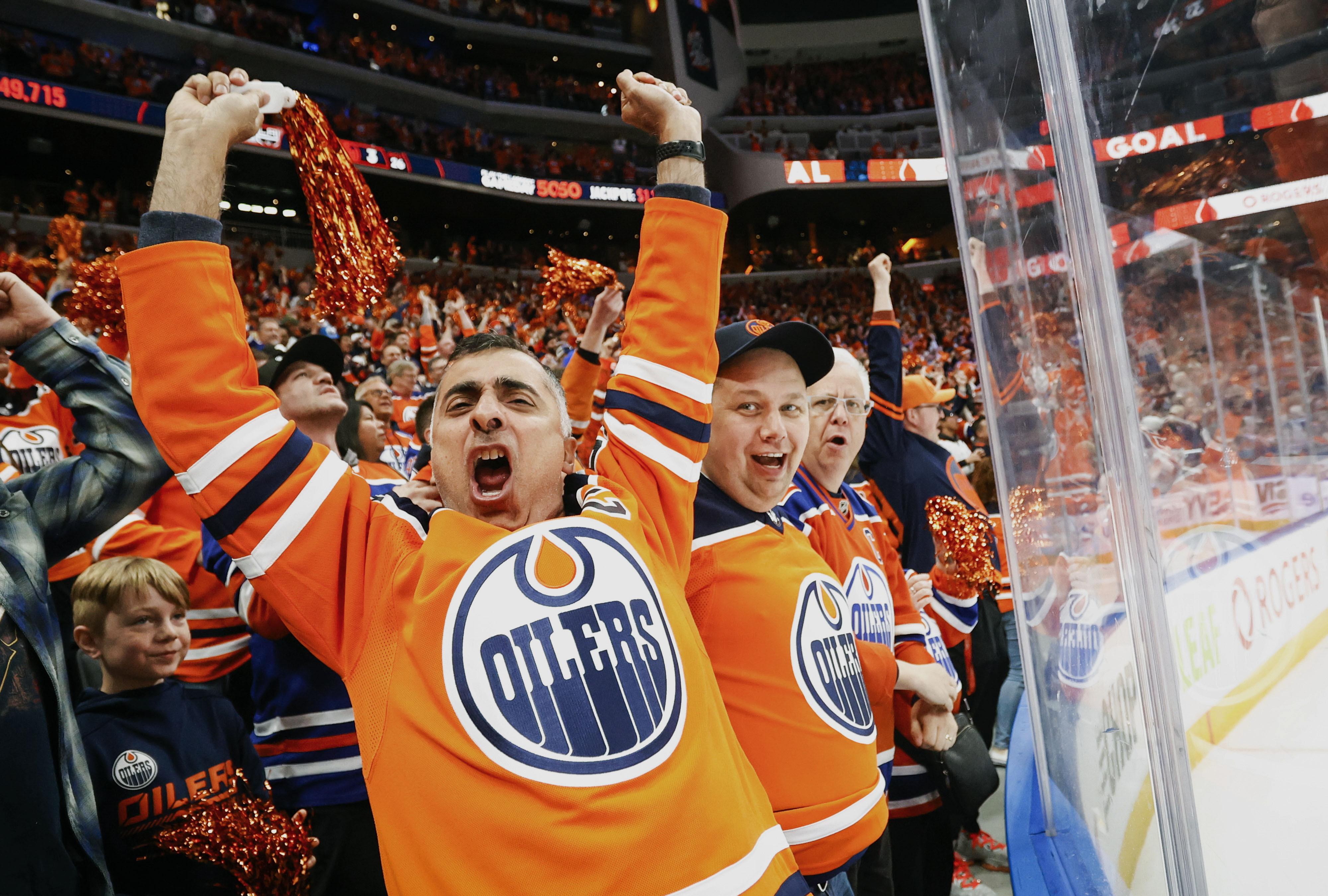 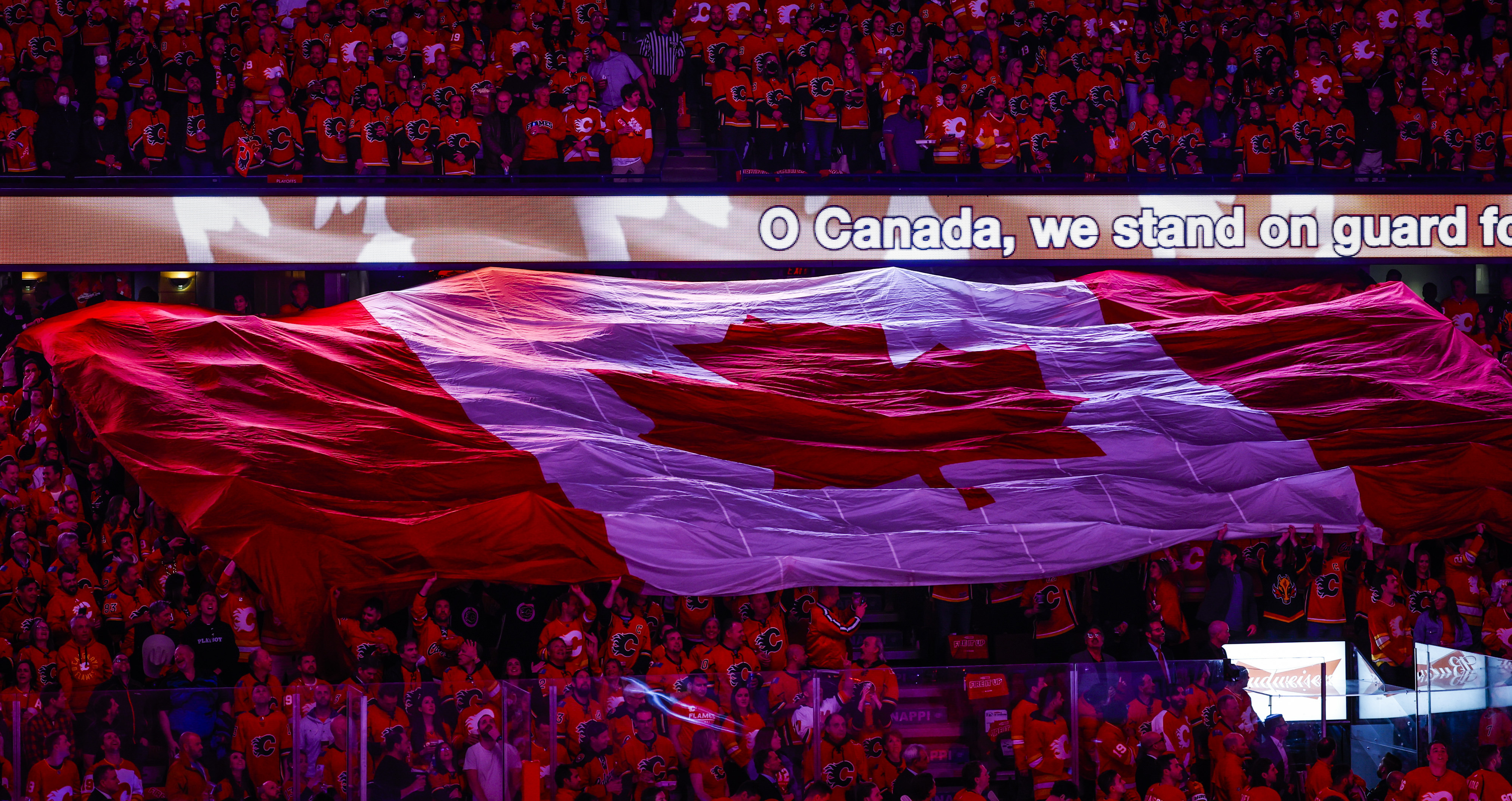 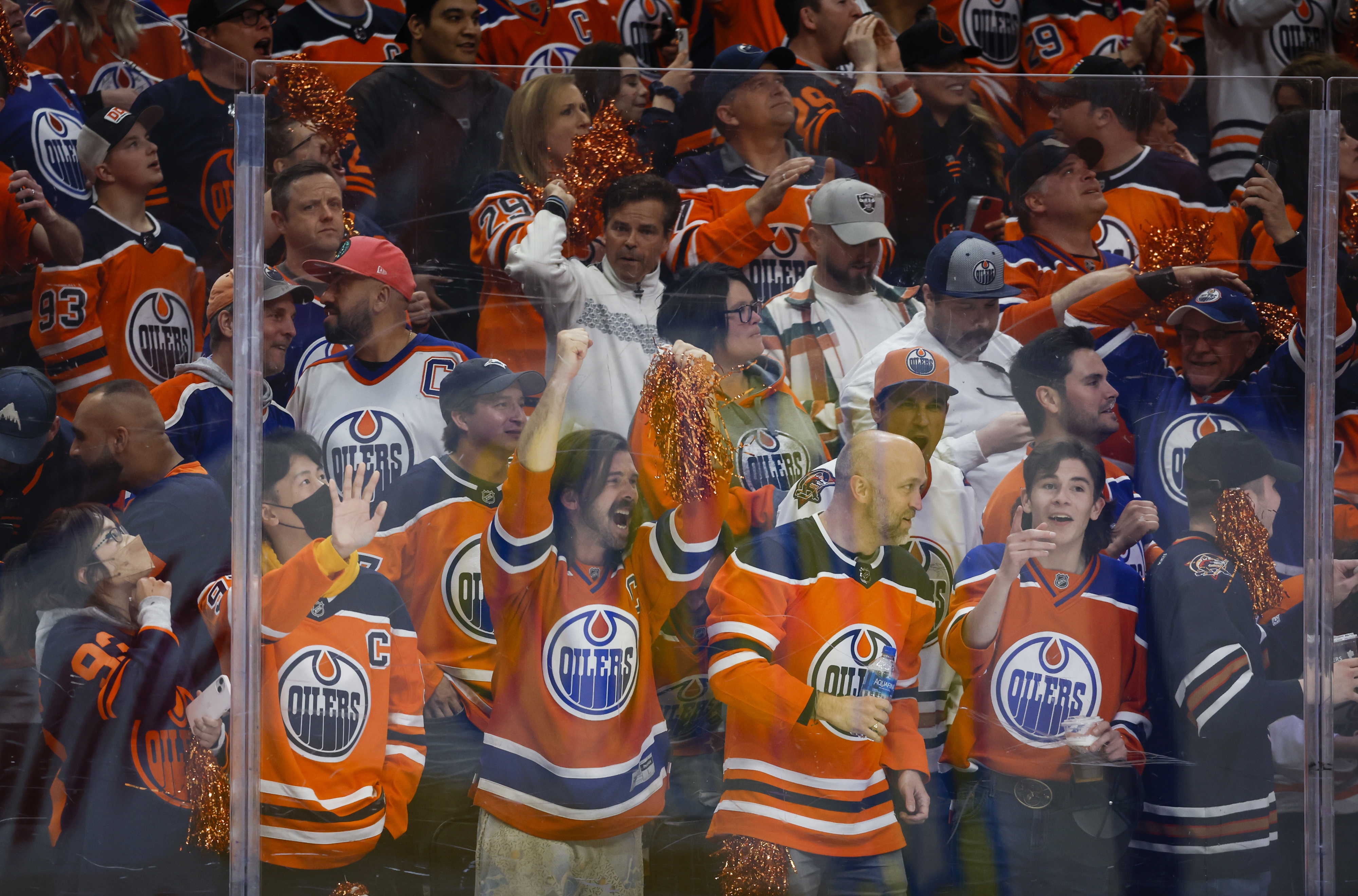 Edmonton Oilers fans cheer a goal against the Los Angeles Kings during the second period in Game 7 of a first-round series in the NHL hockey Stanley Cup playoffs Saturday, May 14, 2022, in Edmonton, Alberta. (Jeff McIntosh/The Canadian Press via AP) 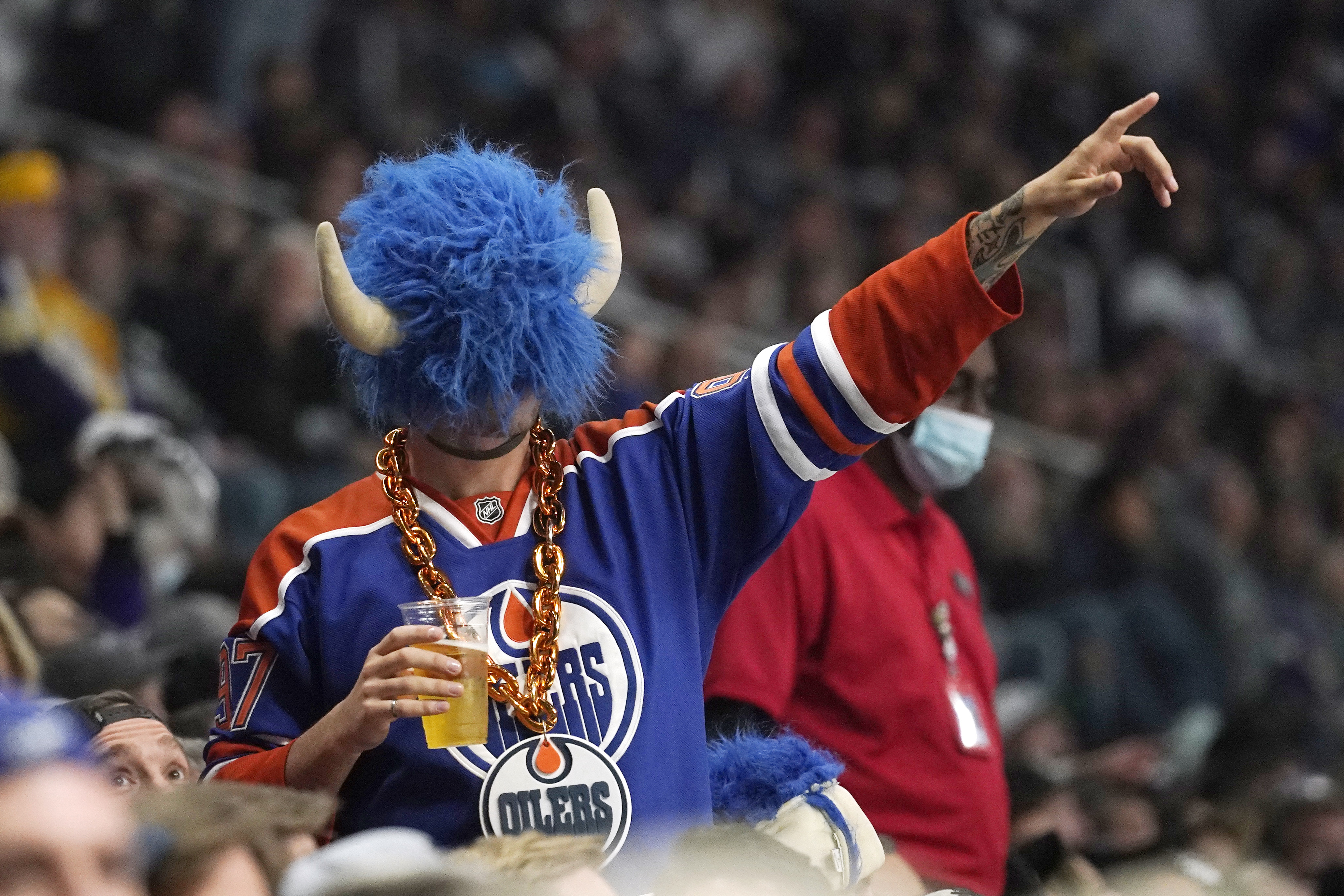 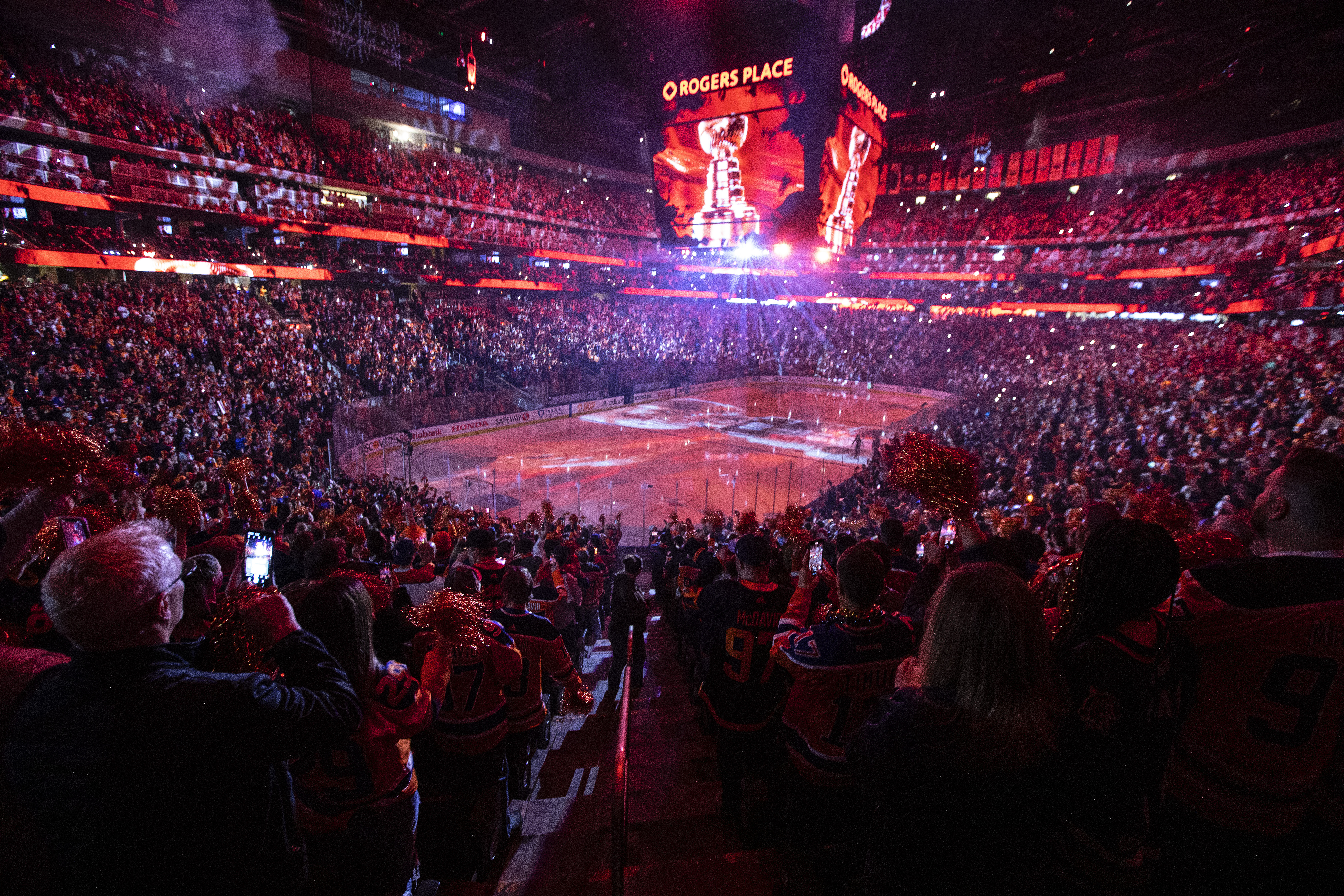 Fans cheer during the opening ceremony before the Los Angeles Kings take on the Edmonton Oilers in Game 1 of an NHL hockey Stanley Cup first-round playoff series, Monday, May 2, 2022 in Edmonton, Alberta. (Jason Franson/The Canadian Press via AP) 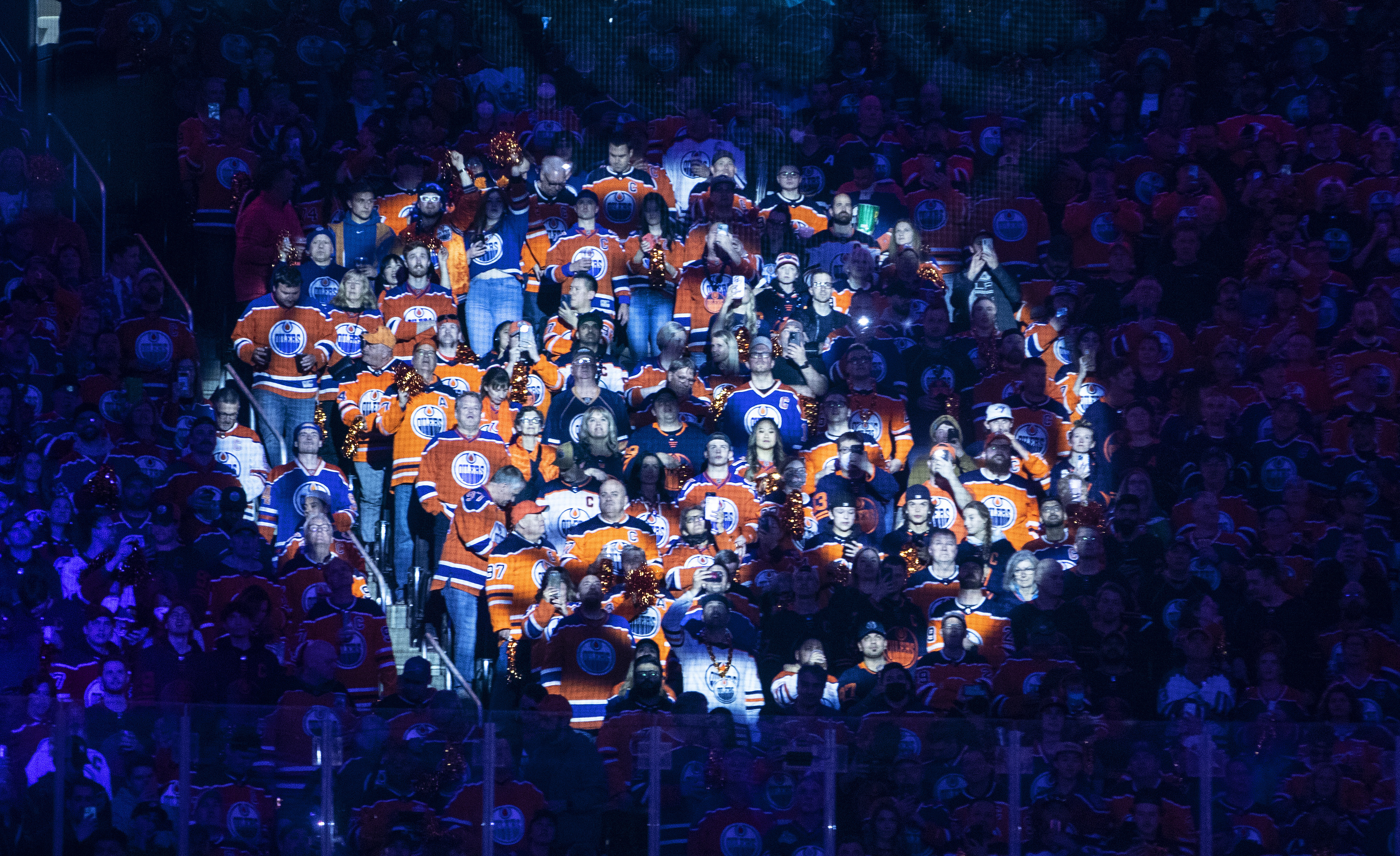 Fans cheer during the opening ceremony before the Los Angeles Kings take on the Edmonton Oilers in Game 1 of an NHL hockey Stanley Cup first-round playoff series, Monday, May 2, 2022 in Edmonton, Alberta. (Jason Franson/The Canadian Press via AP)

Print Headline: Battle of Alberta is splitting allegiances across province