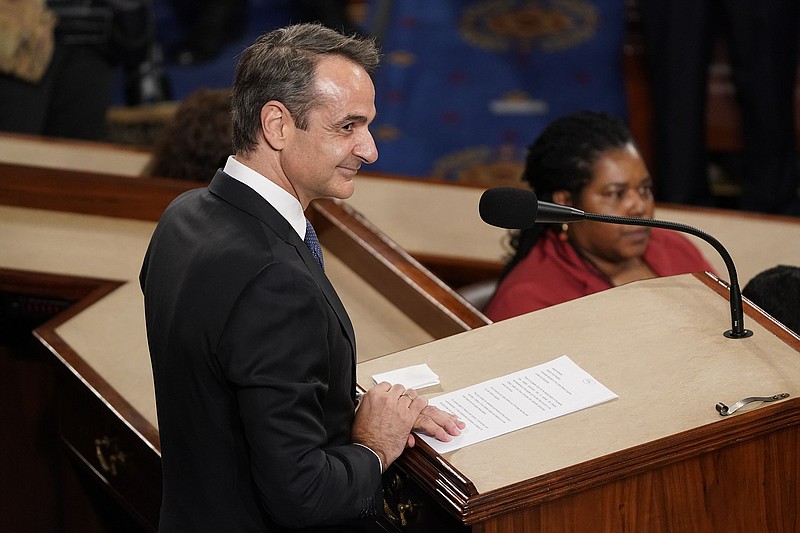 Greek Prime Minister Kyriakos Mitsotakis calls for support for Ukraine, during a speech to a joint meeting of Congress, at the Capitol in Washington, Tuesday, May 17, 2022. (AP Photo/J. Scott Applewhite)

WASHINGTON -- Greek Prime Minister Kyriakos Mitsotakis told the U.S. Congress on Tuesday their shared belief in "freedom over tyranny, in democracy over authoritarianism" is being tested as he focused on Russian President Vladimir Putin's invasion of Ukraine.

Mitsotakis used his address to a joint meeting of Congress to call out the "heroism of the underdog" of Ukrainians fighting the Russian invasion and the "importance of taking sides" to be on the right side of history.

"We took sides. Unequivocally. We stand by Ukraine against Putin's aggression," he said to a standing ovation from the American lawmakers.

"He will not succeed," Mitsotakis said of Putin. "He must not succeed. Not only for the sake of Ukraine, but also in order to send a message to all authoritarian leaders that historical revisionism and open acts of aggression that violate international law will not be tolerated."

The Greek leader was in Washington this week to mark a covid-delayed commemoration of the bicentennial of the start of the Greek War of Independence that led to the ouster of the Ottoman Empire.

His trip is aimed at reinforcing his country's strong energy and defense cooperation with the United States at a time of global unrest.

In inviting him to make the address, Pelosi noted the "unshakable bond" between the two countries as the U.S. founders drew on the ancient Greek ideals of liberty and democracy. "Our nations are key allies on the world stage," Pelosi said.

"As our world faces a pivotal moment in the fight between the forces of democracy and autocracy, the transatlantic alliance remains vital to the future of freedom in the world," she said.

But the celebratory moment was shadowed by the most significant fighting on the continent since World War II, and as President Joe Biden seeks to keep the West unified as it pressures Russia to end the war.

The Mitsotakis government has been outspoken in its criticism of the Russian invasion, now in its 12th week. The war in Ukraine, however, has also unsettled Greek policymakers as a possible source of wider regional instability and an opportunity for neighboring Turkey to seek diplomatic leverage from its major western allies.

Flanked by Vice President Kamala Harris and House Speaker Nancy Pelosi, Mitsotakis drew on the shared values and beliefs of the two counties, noting when he visits the Lincoln Memorial or drives by the Supreme Court with its inscriptions of "Equal Justice Under Law," he is reminded of the Greek ideals and his country's own fight for independence 200 years ago.

"In a word, democracy," Mitsotakis said.

Mitsotakis said Greeks and others had been naive in ignoring the flashing warning signs of Putin's past aggression, including seizing Crimea, believing in a postwar peace in Europe. "We now know that we were wrong," he said. Instead, Greeks with long historical ties to the besieged Ukrainian cities of Mariupol and Odessa were "horrified and appalled" at the violence just 500 miles to their north in southern Ukraine.

"Let me be very clear, we have no animus toward the Russian people," he said. "But we cannot, cannot, be indifferent to a struggle that reminds us so much of our own."

Biden welcomed Mitsotakis to the White House on Monday and thanked him for his country's "moral leadership" after Russia's invasion of Ukraine as the two held talks about the ongoing conflict.

"We're helping Ukrainians say no to Russian aggression," Biden said. "And we're saying no to tyranny, to the idea that autocracies will outpace democracies in the 21st century, because that's what is at stake here in my view."

As Europe looks to wean itself off Russian energy, Mitsotakis has pushed the idea of Greece becoming an energy hub that can bring gas, as well as renewable energies, produced in southwest Asia, the Middle East and Africa to eastern Europe.

"Greece plans to play an important role as a gateway for electricity produced from cheap, renewable sources," Mitsotakis said Monday.

A new Greece-to-Bulgaria pipeline -- built during the covid-19 pandemic, tested and due to start commercial operation in June -- is slated to bring large volumes of gas flow between the two countries in both directions to generate electricity, fuel industry and heat homes.

Greece, a fellow NATO nation, last week formally extended its bilateral military agreement with the United States for five years, replacing an annual review of the deal that grants the U.S. military access to three bases in mainland Greece as well as the American naval presence on the island of Crete.

Leading senators of both parties have struck a deal over a draft bill that would expand a 1996 war crimes law to give American courts jurisdiction over cases involving atrocities committed abroad even if neither party is a U.S. citizen, in the latest response to Russia's apparent targeting of civilians in Ukraine.

The idea behind the draft, a copy of which was obtained by The New York Times, is that if someone who committed war crimes abroad later comes to the United States and is discovered, that person could be prosecuted for those actions by the Justice Department. Killings of civilians and the discovery of mass graves in parts of Ukraine that had been occupied by Russian troops have incited an international outcry.

Despite partisan polarization that has generally gridlocked Congress, supporters of the bill -- which is chiefly sponsored by the top lawmakers on the Judiciary Committee, Sens. Charles Grassley, R-Iowa, and Richard Durbin, D-Ill. -- believe the measure has a realistic chance of quickly becoming law.

The senators are still in talks with House members about a possible companion bill and expect to file the measure later this week, committee staff members said.

"The United States must not be a safe haven for war criminals looking to escape justice in their home country," Grassley, the bill's author, said in a statement to the Times. "This bill sends a strong message that people who commit war crimes are not welcome here and should be punished, regardless of where their offense was committed or who they victimized."

Durbin said the measure would fill "an egregious gap in our laws" to ensure that foreign war criminals in the United States could be prosecuted.

"Perpetrators committing unspeakable war crimes, such as those unfolding before our very eyes in Ukraine, must be held to account," he said in a statement. "We have the power and responsibility to ensure that the United States will not be used as a safe haven by the perpetrators of these heinous crimes."

The senators are lobbying their caucuses to support the bill, hoping to pass it by unanimous consent and skip the committee review process.

Information for this article was contributed by Lisa Mascaro, Aamer Madhani, Zeke Miller and Derek Gatopoulos of The Associated Press and Charlie Savage of The New York Times.