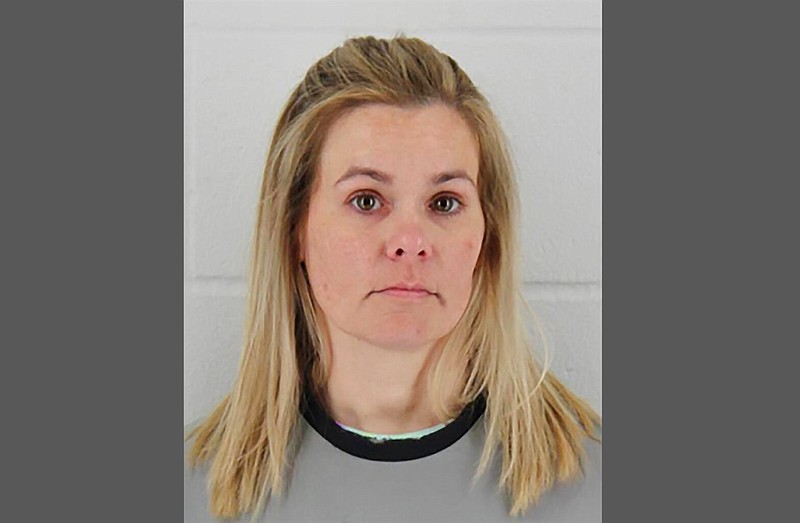 This undated photo provided by the Johnson County (Kan.) sheriff's office shows Jennifer Hall. The former respiratory therapist who is charged with first-degree murder in the death of a patient in Missouri 20 years ago has been arrested in northeastern Kansas, authorities said. (Johnson County sheriff's office via AP)

In the five months that Jennifer Anne Hall was a respiratory therapist at Hedrick Medical Center about 90 miles northeast of Kansas City, the rural Missouri hospital experienced 18 “code blue” incidents — an alarming increase in sudden cardiac arrest events for a hospital that historically averaged one of them a year, according to a police investigator.

Nine of those patients died, and nine recovered. Twenty years later, Hall was charged this month with first-degree murder in one of the deaths — that of 75-year-old Fern Franco.

Livingston County Prosecuting Attorney Adam Warren, who launched an investigation 10 years ago, said Franco died of lethal doses of succinylcholine — a relaxant that paralyzes the respiratory muscles — and the pain reliever morphine. The prosecutor did not disclose a possible motive or say why the investigation took a decade.

Hall’s attorney, Matt O’Connor, said she is innocent and that as a respiratory therapist, she didn’t have access to succinylcholine, morphine or any other drugs. He said Hall became a scapegoat for the deaths at Hedrick because of an arson conviction that she was cleared of in 2005.

Franco’s granddaughter, Aprille Franco, hopes investigators get to the bottom of the other deaths.

“Just for the other families’ sake,” Franco, 44, of Kansas City, Mo., said. “They’ve been waiting 20 years for answers. It’s up to my grandma’s case to find answers for them.”

Hall, 41, pleaded innocent Thursday and is jailed without bond. O’Connor said he will seek bond so Hall can get chemotherapy treatment for leukemia. A hearing on that request was set for May 27.

She began working at Hedrick in December 2001. The small hospital is in Chillicothe, a town of 9,100 residents about 90 miles northeast of Kansas City.

Hospital officials were alerted to the concerns about Hall but “did everything in the world to cover it up” to avoid bad publicity, said Scott Lindley, the county coroner. No criminal investigation was launched at the time.

A wrongful-death lawsuit naming the hospital and the company that now operates it, St. Luke’s Health System, was filed in 2010 on behalf of relatives of five patients who died. The Missouri Supreme Court tossed the lawsuit in 2019, ruling it was filed after the statute of limitations had run out.

St. Luke’s Health System noted in a statement that it took over operation of Hedrick more than a year after the deaths.

“We, too, are only interested in the truth, and look forward to a final resolution of the investigation,” the statement read.

Warren, who was elected prosecutor in 2010, opened the investigation in 2012, saying he didn’t believe that a “thorough investigation has ever been completed.”

The deaths involved people of varying ages and levels of health.

But David Harper was just 37. He had been hospitalized with pneumonia, but the lawsuit said he was so much better that he was about to be discharged. He died on March 20, 2002.

Similarly, 49-year-old Shirley Eller was a day away from going home after being treated for pneumonia when she collapsed and died on March 9, 2002.

The lawsuit said Eller’s death was attributed to “natural causes,” the same as the others who died. Eller’s sister, Helen Pittman, found that puzzling. Eller smoked but was otherwise healthy and active.

“It was a shock,” Pittman said. “It just seems really suspicious. Shirley was doing good.”

Franco also had been hospitalized with pneumonia. Hall and another staff member identified only as “J.A.” in the probable cause statement found her dead on May 18, 2002.

“Hall’s victim was a sick, defenseless, elderly woman who was depending on Hall to care for physical ailment within a medical facility,” Schmidt wrote. He said the succinylcholine caused a “ghastly death from suffocation” while Franco was fully conscious.

Hall was fired months later, but not because of the patient deaths. O’Connor said she was fired after hospital officials learned she had been convicted of an arson fire at another small Missouri hospital, Cass Regional Medical Center in Harrisonville, where she previously worked. She was free on appeal when she took the job in Chillicothe and later spent a year behind bars before being acquitted at a retrial.

O’Connor called it unfathomable that Hall would again be singled out for a crime that, he says, she didn’t commit.

He said Hall’s proximity to the patients shouldn’t be unexpected since it’s a small hospital with a small staff.

Twenty years after the death of her younger sister, Pittman, 79, wasn’t ready to pass judgment, but she does want investigators to keep looking into Shirley Eller’s death.

“It’s hard for me to believe people can be that mean,” Pittman said. “But I guess they can.”