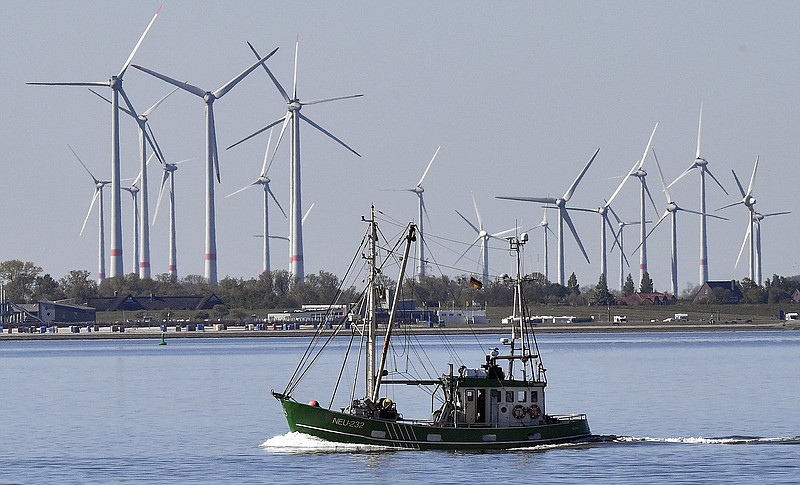 A fisher boat passes wind turbines between the island Langeoog and Bensersiel at the North Sea coast in Germany, in the summer of 2019. (AP/Martin Meissner)

She said her country, together with Belgium, the Netherlands and Germany, "want to increase our total offshore wind capacity fourfold by 2030 and tenfold by 2050." The plan is to provide energy to 230 million European households.

"[This] means that we are able, the four of us, to deliver more than half of all offshore wind needed to reach climate neutrality in the European Union," Frederiksen added.

Scholz said the scale of the project "will be of an unimaginable order."

"The North Sea is the place where, with the offshore wind parks, we can produce electricity on a large scale, in the large quantities we need -- and can already do (that) today in a way that it is economical," he said.

The new wind farms will be built along the four countries' North Sea coasts.

Frederiksen said the project would help address the challenges posed by Russia's war against Ukraine and climate change, both which, she said, "affect the European economy and the safety of our peoples."

Von der Leyen, who earlier in the day presented an EU-wide energy package in Brussels, said the war in Ukraine "highlights the risks we have taken to be too dependent on Russian fossil fuels."

The four countries pledged to set "ambitious combined targets for offshore wind of at least 65 GW by 2030," their energy and climate ministers said in a statement. It said they also aim to "more than double our total 2030-capacity of offshore wind to at least 150 GW by 2050."

This, they said, would deliver more than half the capacity needed for the EU to reach climate neutrality.

In Brussels, the European Commission moved Wednesday to jump-start plans for the whole 27-nation EU to abandon Russian energy amid the Kremlin's war in Ukraine. The commission proposed a nearly $315 billion package that includes more efficient use of fuels and a faster rollout of renewable power.

The investment initiative by the EU's executive arm is meant to help the bloc start weaning itself off Russian fossil fuels this year. The goal is to deprive Russia, the EU's main supplier of oil, natural gas and coal, of tens of billions in revenue and strengthen EU climate policies.

The European Commission has set an overall target of generating 300 gigawatts of offshore energy by 2050.

Along with climate change, the war in Ukraine has made EU nations eager to reduce their dependency on Russian natural gas and oil. In 2021, the EU imported roughly 40% of its gas and 25% of its oil from Russia.

At a March 11 summit, EU leaders agreed in principle to phase out Russian gas, oil and coal imports by 2027.

Information for this article was contributed by Frank Jordans and Geir Moulson of the Associated Press.