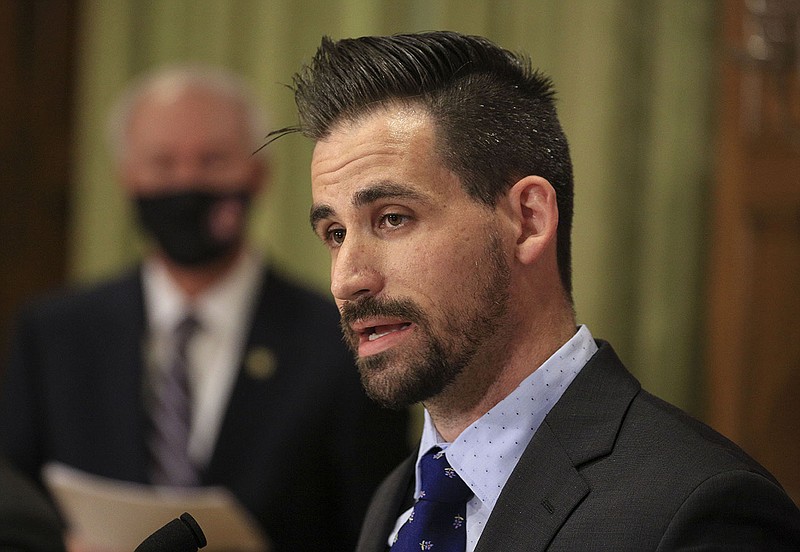 After weeks of gradual increases, Arkansas' new coronavirus cases took a sharp turn upward on Wednesday as the case count rose by 462.

It was the largest one-day rise since March 22, a time when the state's new case numbers were inflated by a backlog of reports faxed in by providers weeks earlier during the winter surge of infections from the omicron variant.

Before Wednesday, the largest daily increase in cases since then had been the 287 cases that were added on Tuesday.

"Today kind of represented a little bit of an acceleration of our upward trend," State Epidemiologist Mike Cima said Wednesday.

He said Arkansas' new cases appeared to be following a pattern similar to what's happened in other states, particularly in the Northeast.

"They started a gradual trend upwards, and it kind of compounded on itself," Cima said.

Infections in those states, he added, "aren't showing signs of slowing down, at least not as of yet."

A reduction in preventive measures such as mask-wearing and a more-infectious version of omicron known as BA.2.12.1 are likely contributing to the uptick, he said.

According to estimates updated Tuesday by the U.S. Centers for Disease Control and Prevention, the strain accounted for 47.5% of covid-19 cases nationwide last week, up from 38.8% the previous week.

It's possible that large gatherings, such as activities related to the end of the school year, are also contributing to the spread, he said.

"Any large gathering has some risk associated with it," he said.

But he noted that Arkansas' upward trend began about a month ago, well before the end of the school year.

He said he didn't want to guess how high the new case numbers will rise.

As for hospitalizations, he said, "I think it's reasonable to expect hospitalizations to increase in some manner," especially since the number hospitalized has been hovering around its lowest level in two years.

Based on what's happened so far in Arkansas and in other states, however, he said he doesn't expect the number to reach the levels it did during previous waves of infections, such as the one this past winter.

"I don't believe that we'll reach crazy high levels of hospitalizations from this wave," he said.

Growing for the third day in a row, the number hospitalized rose Wednesday by two, to 58, its highest level in more than a week but still down from this month's high of 64 on May 10.

The state's death toll from the virus, as tracked by the Arkansas Department of Health, rose by eight, to 11,426, the largest daily increase in more than a month.

Cima said, however, several of the deaths reported Wednesday happened earlier this year and were added to the state's count as part of an ongoing review of death certificates.

He said 14 deaths were added and six were removed. Of the ones that were added, he said, nine happened over a month ago.

Already at its highest level since the week ending March 27, the average daily increase in Arkansas' case count over a rolling seven-day period rose to Wednesday to 245.

With new cases outnumbering recoveries, the number of cases in the state that were considered active rose by 236, to 2,763, the largest total since March 7.

It was the biggest one-day jump in active cases since January, when the total was rising by thousands each day at the height of the omicron surge.

The number of the state's virus patients who were on ventilators remained for a second day Wednesday at six, its lowest level since March 25, 2020.

After rising by nine on Tuesday, the number who were in intensive care fell by 10, to 18.

At its hospitals in Little Rock and Springdale, Arkansas Children's had four covid-19 patients on Wednesday, down from five as of Tuesday, spokeswoman Hilary DeMillo said.

According to data from The New York Times, the last time an Arkansas county had more than 100 new cases in a single day was March 22.

The Health Department's tally of vaccine doses that had been administered rose by 2,467, which was larger by 464 than the daily increase a week earlier.

About 36% of the most recent increase was from doses classified on the Health Department's online coronavirus dashboard as not having an "available dose number."

The count of doses for people receiving the vaccine for the first time rose by 499, which was up by 83 compared with the increase in first doses a week earlier.

After dipping a day earlier, the average number of total doses administered each day over a rolling seven-day period rose to 1,440, which was up from an average of 1,361 a day the previous week.

The average for first doses rose to 320.

According to the CDC, the percentage of Arkansans who had received at least one dose remained Tuesday at 66.9%, and the percentage who were fully vaccinated remained at 54.6%.

The percentage of those fully vaccinated who had received a booster dose rose from 39.9% as of Tuesday to 40%.

In the percentage who were fully vaccinated, it fell from being roughly tied with Tennessee for 46th to 47th, ahead of Louisiana, Mississippi, Alabama and Wyoming.

Nationally, 77.7% of people had received at least one dose, and 66.5% were fully vaccinated.

Of the fully vaccinated population nationally, 46.4% had received a booster dose.