Deal made on bill to boost aid for veterans 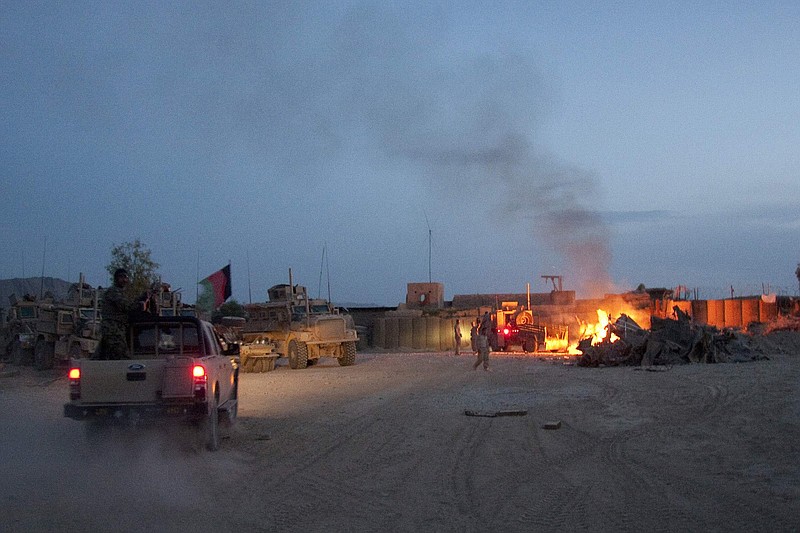 WASHINGTON -- Congressional bargainers announced Wednesday that they have reached a deal on legislation to boost health care services and disability benefits for veterans exposed to toxic burn pits in Iraq and Afghanistan.

The agreement paves the way for passage of a bill that has become the priority of veterans' groups seeking to help the increasing number of people with illnesses that they believe are related to toxic exposure.

The top Democratic and Republican lawmakers on the Senate Veterans' Affairs Committee reached an agreement after months of negotiations. Senate Majority Leader Chuck Schumer, D-N.Y., and House Speaker Nancy Pelosi, D-Calif., quickly threw their support behind the measure. Passage could come in July.

"Our veterans need it, they deserve it, and we have a moral obligation to take care of those who have sacrificed so much for us," Schumer said.

The House in March passed a version of the bill that the Congressional Budget Office projected would increase federal spending by more than $300 billion over 10 years. It would increase access to VA health care to millions of veterans who served in Iraq and Afghanistan even if they don't have service-connected disabilities.

The legislation would also presume that certain respiratory illnesses and cancers were related to burn pit exposure, allowing the veterans to obtain disability payments to compensate for their injury without having to prove the illness was a result of their service. Reporting from the Department of Veterans Affairs indicates that nearly 80% of exposure disability claims related to burn pits are denied.

The military routinely disposed of tires, batteries, medical waste and other materials in open burn pits during operations in Iraq and Afghanistan.

Most Republican lawmakers in the House voted against the bill, voicing concerns that the influx of cases would tax an already stressed VA system, leading to longer wait times for health care and the processing of disability claims.

A key difference in the agreement reached by Sens. Jon Tester, D-Mont., and Jerry Moran, R-Kan., is the phase-in period for presuming that certain conditions were caused by toxic exposure. But key elements of the House measure are part of the deal. Pelosi described the two bills as "nearly identical."

The two senators said that 23 illnesses, including hypertension, would be presumed related to burn pit exposure when it comes to providing disability compensation.

"For far too long, our nation's veterans have been living with chronic illnesses as a result of exposures during their time in uniform," Tester and Moran said in a joint statement. "Today, we're taking necessary steps to right this wrong with our proposal that'll provide veterans and their families with the health care and benefits they have earned and deserve."

The two senators said the bill would also affect veterans who served in Vietnam, expanding the number of illnesses presumed related to exposure to Agent Orange to include hypertension. It would also expand the presumption of exposure to the toxic herbicide for veterans who deployed to Thailand, Cambodia, Laos, Guam and American Samoa.

Moran said the Senate bill would provide more resources up front for VA staffing to deal with the increased demand. He also projected it would come in at a lower price tag than the House bill by "tens of billions" of dollars, though an official cost estimate is not yet available. He said the changes in the Senate bill are "so the VA can get their feet on the ground and take care of all veterans without harming any veterans" already in the system.

Karine Jean-Pierre, the new White House press secretary, said Wednesday that passage of the bill "would be a welcome and long-awaited achievement" for veterans.

Print Headline: Deal made on bill to boost aid for veterans