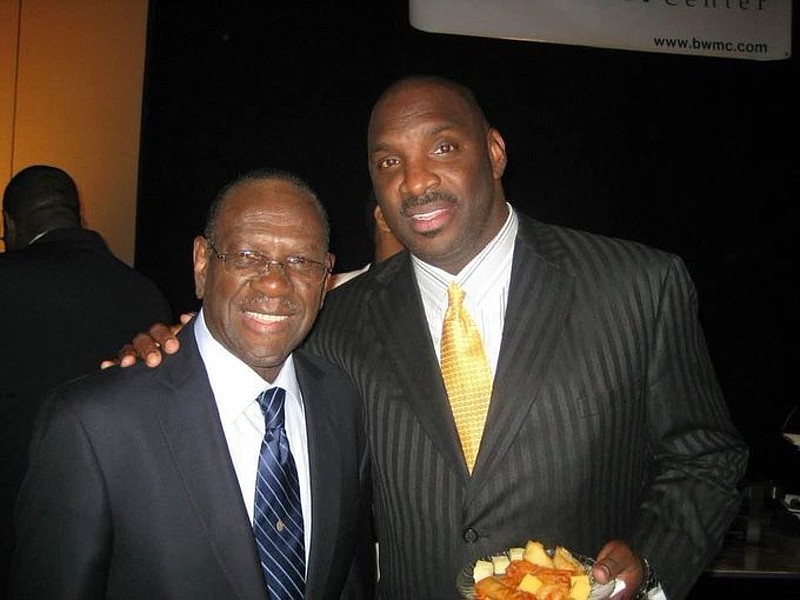 Vannette Johnson (left), a former football coach at the University of Arkansas at Pine Bluff, poses with former Grambing State quarterback and coach Doug Williams in this undated photo. Johnson, who also served as a justice of the peace in Jefferson County, died May 12, 2022. He was 91. (Special to The Commercial/University of Arkansas at Pine Bluff)

Dr. Vannette W. Johnson, the first University of Arkansas at Pine Bluff football coach to lead his team to a Southwestern Athletic Conference championship, died last Thursday. He was 91.

Johnson retired from UAPB after 57 years of service in 2014, according to his obituary. While at the school, he was also athletic director, professor of education, chairman of the Department of Health and Physical Education and compliance coordinator for the athletic department.

In public service, Johnson was Jefferson County District 7 Justice of the Peace for 38 years until his retirement in 2014. One of his proudest accomplishments, according to his obituary, was seeing the Quorum Court appropriate funds to help build what is now Simmons Bank Field at Golden Lion Stadium, which opened in 2000.

UAPB – which was known as Arkansas Agricultural, Mechanical & Normal College prior to 1972 – shared the four-way SWAC title with Grambling State, Southern and Texas Southern in 1966. Johnson directed the Golden Lions program for 11 seasons (1962-72) with an overall 54-46-6 record. He also coached L.C. Greenwood, a linebacker who went on to four Super Bowl titles with the Pittsburgh Steelers during the 1970s, and produced 31 other professional athletes.

Although he wasn't directly involved with Johnson as a player, current UAPB Athletic Director Chris Robinson – a quarterback for the Golden Lions in 1993-94 – still felt Johnson's enormous presence whenever he was around him.

"I spoke to several guys who played with him, and they always said that he was a straight shooter," Robinson said. "He was a leader of men and conducted himself in a way that really resonated with his players. He wanted to teach them not only about what it meant to be great on the field, but in life beyond UAPB." Johnson's transition from the gridiron to the administrative office beginning in 1962 was seamless as he remained steadfast in his impact on the student body off the field.

"He was still very consistent in everything he did and was a legend on our campus." Robinson added. "The main thing about him is that he led through action by teaching the next generation how to do it – he was a doer. He was a man of few words, but he always spoke from the heart. I always loved his professionalism. The way he communicated with his staff and the students will remain on my mind."

Johnson was inducted into the UAPB Hall of Fame in 2000.

In his playing days, Johnson starred at Dunbar High School in Little Rock before graduating in 1948 and then played college football as a quarterback for Arkansas AM&N before he graduated in 1952 with a bachelor's degree in history and government. From there, he went on to earn a Master's degree in physical education from the University of Arkansas in 1961.

Johnson began his coaching career as an assistant at Merrill High School in Pine Bluff in 1952. He returned to Arkansas AM&N in 1957 as backfield coach for the football team and head track coach.