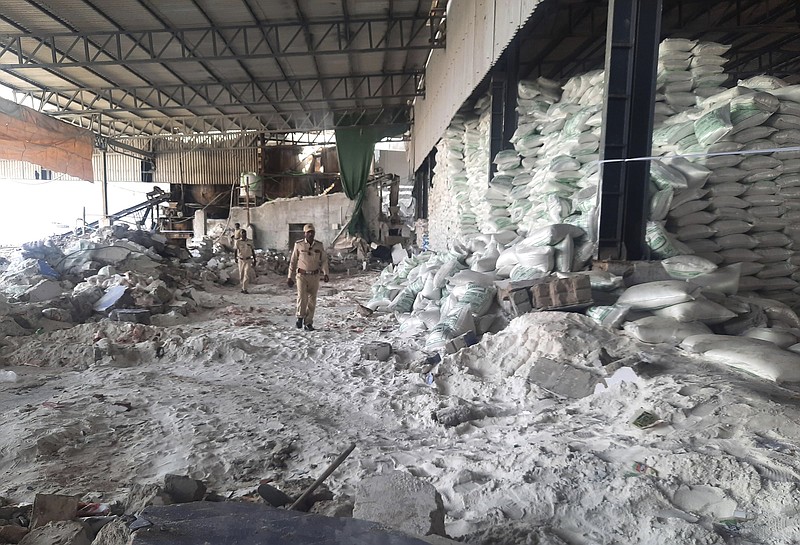 NEW DELHI -- A wall collapsed in a salt packaging factory in western India on Wednesday, killing at least 12 workers and injuring another 13, a government administrator said.

The workers stocking salt in bags were found buried in the wall debris in the factory in Morbi district, 135 miles west of Gandhinagar, the capital of Gujarat state, said J.B. Patel, the district officer.

The injuries of 13 workers, mostly fractured bones, were not life-threatening, Patel said.

He also said that the rescue work was almost over. Other details were not immediately available.

Authorities are investigating the cause of the wall collapse.

Prime Minister Narendra Modi described the deaths as heart-rending. "In this hour of grief, my thoughts are with the bereaved families. May the injured recover soon," he said.

LONDON -- A U.K. Conservative lawmaker was released on bail Wednesday while police investigate allegations of rape and sexual assault against him, the latest in a series of sexual misconduct allegations that have led some to label Britain's Parliament a toxic workplace.

The legislator was arrested Tuesday on suspicion of indecent assault, sexual assault, rape, abuse of position of trust and misconduct in public office. Police, who identified the suspect only as a man in his 50s, said the arrest followed a report of alleged offenses that took place in London between 2002 and 2009.

House of Commons Speaker Lindsay Hoyle told lawmakers that "a member has been arrested in connection with an investigation into an allegation of very serious criminal offenses."

He said the lawmaker would stay away from Parliament while police were investigating.

"I, the House of Commons Commission and the House service take the safety of our staff and parliamentary community as a whole very seriously and are ensuring any necessary measures are taken in respect of MPs, employees and staff," Hoyle said.

Killer of 5 victims guilty in Norway

COPENHAGEN, Denmark -- A man charged with killing five people and wounding four others in southern Norway when he attacked strangers with a bow and arrows and knives pleaded guilty Wednesday to murder and attempted murder.

"I admit criminal guilt for the entire charges," the suspect, Espen Andersen Brathen, 38, said as his trial started according to Norwegian news agency NTB.

The five victims were fatally injured on Oct. 13, 2021. Andersen Brathen also faces 11 counts of attempted murder for allegedly shooting at people with a bow and arrows in Kongsberg, a former mining town of 26,000 people.

He further is accused of causing bodily harm, threatening behavior, refusing to obey police orders and tossing knives at officers.

The attacks started inside a grocery store. Andersen Brathen was arrested more than half an hour after he allegedly started firing arrows inside the store and attacking people inside their homes.

Prosecutors want him sentenced to compulsory mental health care, saying he was in a "strongly deviating state of mind" during last year's attack, according to charging documents obtained by The Associated Press.

After his arrest, Andersen Brathen was admitted to a closed psychiatric ward. Three forensic psychiatric experts who assessed him concluded he was probably insane at the time of the killings.

The trial is expected to last a month.

JOHANNESBURG -- Health authorities in Mozambique declared a polio outbreak Wednesday after confirming that a child in the country's northeastern Tete province had been paralyzed by the disease.

The case in Mozambique is the second imported case of polio in southern Africa this year, after a case was discovered in Malawi in mid-February. It's the first case of wild polio in Mozambique since 1992, although cases linked to a mutated virus from the oral vaccine were detected in 2019.

The latest case in Mozambique was found in a child who experienced signs of paralysis in late March, according to a statement issued by the World Health Organization.

Sequencing indicates that the case in Mozambique is linked to a strain of polio spreading in Pakistan in 2019, similar to the case reported in Malawi earlier this year.

WHO declared Africa free of the wild polio virus in August 2020 even though numerous countries across the continent have reported outbreaks linked to the vaccine in recent years. There is no difference between the disease caused by the wild virus or the mutated virus from the vaccine.

"The detection of another case of wild poliovirus in Africa is greatly concerning, even if it's unsurprising given the recent outbreak in Malawi. However, it shows how dangerous this virus is and how quickly it can spread," said Matshidiso Moeti, the World Health Organization's Africa director.

In response to the case in neighboring Malawi, Mozambique recently carried out two mass vaccination campaigns in which 4.2 million children were vaccinated against the disease, said WHO.