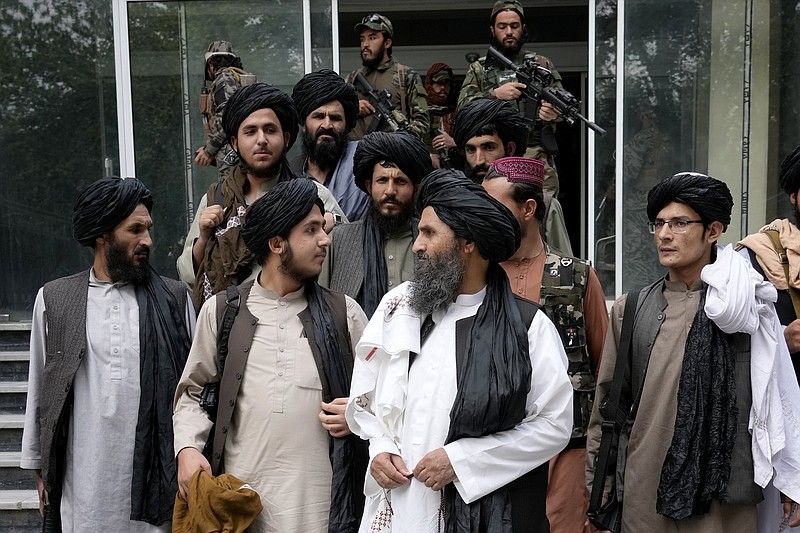 Mullah Abdul Ghani Baradar, acting deputy prime minister of the Afghan Taliban’s caretaker government (center) and other Taliban officials attend a ceremony marking the ninth anniversary of the death of Mullah Mohammad Omar, the late leader and founder of the Taliban, on April 24 in Kabul, Afghanistan. (AP/Ebrahim Noroozi)

ISLAMABAD -- The Pakistani Taliban on Wednesday said they are extending a cease-fire with the government until May 30, after the two sides held an initial round of talks hosted by the Afghan Taliban in neighboring Afghanistan.

The spokesman for the militant group, Mohammad Khurasani, said the talks between the Pakistani Taliban and the Islamabad government were being facilitated by Afghanistan's new Taliban rulers.

The Taliban in Kabul confirmed the talks and the extension of the cease-fire. Their spokesman, Bilal Karimi, said they are doing their "best for the continuation and success of the negotiations."

The Pakistani militant group -- known as Tehrik-e-Taliban Pakistan or TTP -- is separate but allied with Afghanistan's Taliban, who seized power in their country last August.

The TTP has long fought for stricter enforcement of Islamic laws in Pakistan, the release of their members in government custody, and a reduction of military presence in the country's tribal regions. They have also been emboldened by the Taliban takeover in Afghanistan and have over the past months stepped up attacks against government forces.

Khurasani, the TTP spokesman, said the group agreed to extend the cease-fire, which began on May 10, at the request of a delegation of the Pakistani tribal elders who separately met with the TTP this week. He provided no further details.

It was unclear who represented the TTP or the Pakistani government at the talks. There was also no immediate comment from Pakistan's military or the government, although officials earlier acknowledged dispatching a delegation to Kabul for talks with the TTP.

Pakistani analyst Imtiaz Gul said Islamabad had demanded firm action from the Taliban in Kabul to prevent TTP militants from using Afghan territory to stage cross-border attacks against Pakistan -- even threatening counter-attacks into Afghanistan and "pursuit by Pakistani security forces."

"These talks are the result of Pakistan's highest-level tough messages, which were conveyed to the Afghan Taliban" following a surge in TTP's cross-border attacks on Pakistani troops, he said.

TTP has been behind numerous attacks on Pakistani security forces and civilians over the last 15 years.

Islamabad wants Kabul to act against militants using Afghan territory for attacks inside Pakistan. Before the Taliban takeover, Islamabad and Kabul often traded blame and accused each other of sheltering militants.

Pakistan now says it has completed construction of 93% of a fence along the border with Afghanistan to prevent cross-border militant attacks.

Information for this article was contributed by Rahim Faiez of The Associated Press.