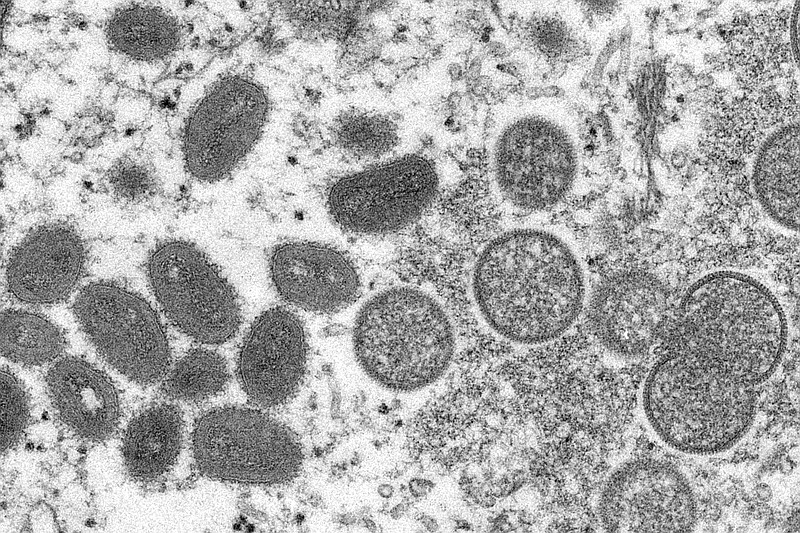 This 2003 electron microscope image made available by the Centers for Disease Control and Prevention shows mature, oval-shaped monkeypox virions, left, and spherical immature virions, right, obtained from a sample of human skin associated with the 2003 prairie dog outbreak. On Wednesday, May 18, 2022, Portuguese health authorities confirmed five cases of monkeypox in young men, marking an unusual outbreak in Europe of a disease typically limited to Africa. (Cynthia S. Goldsmith, Russell Regner/CDC via AP)

LISBON, Portugal -- Portuguese health authorities on Wednesday confirmed five cases of monkeypox in young men, and Britain announced another two, marking an unusual outbreak in Europe of a disease typically limited to Africa.

Portugal's General Directorate for Health said they were also investigating 15 suspected cases and that all were identified this month in the area around the capital, Lisbon.

All the Portuguese cases involve men, most of them young, authorities said. They have skin lesions and were reported to be in stable condition. Authorities did not say if the men had a history of travel to Africa or any links with recent cases in Britain or elsewhere.

British health authorities said Wednesday they had identified two new cases of monkeypox, one in London and another in southeast England. They said neither patient had previously traveled to Africa and that it was possible they were infected in the U.K. The patients had no known links to other previously confirmed patients, suggesting there may be multiple chains of monkeypox transmission already happening in the country.

Dr. Susan Hopkins, chief medical adviser of Britain's Health Security Agency said the latest cases, alongside the other infections reported in Europe, "confirms our initial concerns that there could be spread of monkeypox within our communities."

The agency said recent cases had been seen "predominantly in gay, bisexual or men who have sex with men," although it noted it was unclear how exactly people had been infected.

Monkeypox has not previously been documented to have spread through sex, but can be transmitted through close contact with infected people, their clothing or bedsheets.

Earlier this week the U.K. agency reported four cases of monkeypox they said had been spread among gay and bisexual men in London. The agency said the risk to the general population "remains low."

Health authorities in Spain's central Madrid region said late Wednesday that they were assessing 23 possible cases of monkeypox. They noted that all of the suspected cases are young men and that the majority of them had sex with other men.

The disease belongs to a family of viruses that includes smallpox. Most people recover from monkeypox within weeks, but the WHO said that the disease is fatal for up to one in ten people. Sporadic cases of monkeypox have been seen previously in countries including Britain and the U.S., but nearly all have been in people who were likely infected during their travels in Africa.

The virus has typically spread to people from infected animals like rodents, although human-to-human transmission has been known to occur.

Some British experts said it was too soon to conclude that monkeypox had spread through sexual contact, although the outbreak there suggested that possibility.

Keith Neal, an infectious diseases expert at the University of Nottingham, said the transmission might not have occurred through sexual activity but just "the close contact associated with sexual intercourse."

A vaccine developed against smallpox has been approved for monkeypox, and several anti-virals also appear to be effective.

In the U.S., Massachusetts health authorities confirmed a case of monkeypox Wednesday after the Centers for Disease Control and Prevention said it was monitoring the possible spread of the rare but potentially serious viral illness.

A man who recently traveled to Canada was tested Tuesday for the virus and the infection was confirmed Wednesday by the CDC, the Massachusetts Department of Public Health said in a statement.

The CDC is monitoring six Americans for potential monkeypox infection after they shared a flight with a British patient who tested positive for the virus, senior CDC official Jennifer McQuiston told STAT on Tuesday.

U.S. officials said clinicians should consider a diagnosis of monkeypox in people with an otherwise unexplained rash who also traveled to a country that had a confirmed case, had contact with someone who may be infected or is a man who had sexual contact with other men.

Information for this article was contributed by Barry Hatton, Maria Cheng, Joe Wilson and Aritz Parra of The Associated Press and by Meryl Kornfield of The Washington Post.