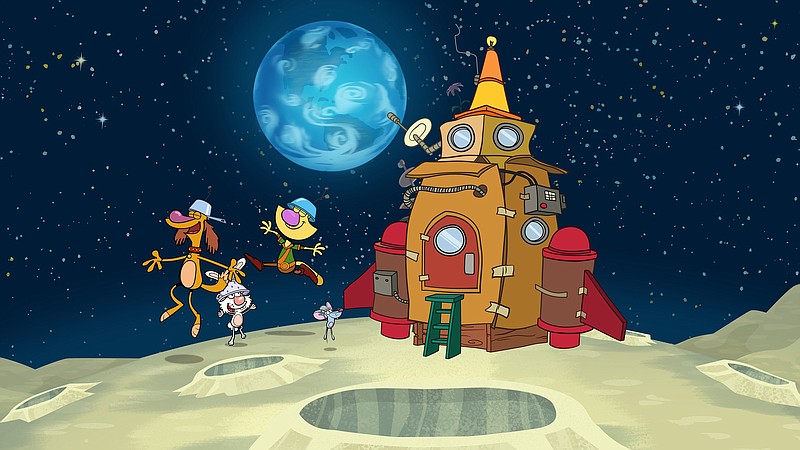 The characters from “Nature Cat” get things jumping on a visit to the moon. (Courtesy PBS/TNS)

A cat, a mouse, a bunny and a dog skipping through nature, exploring hiking trails and helping out other animals along the way may not seem like a show that would fit with the often snarky and sarcastic tone of cast members from "Saturday Night Live."

But "Nature Cat," an earnest show that is part of PBS Kids' "Explore the Outdoors" lineup, enlists some of the funniest people on TV to play straight-edged cartoon characters trying to solve problems out in the environment. Nature Cat or Fred the cat (Taran Killam) goes on adventures with his friends Hal the dog (Bobby Moynihan), Daisy the bunny (Kate Micucci) and Squeeks the mouse (Kate McKinnon). Other longtime "SNL" members who've lent voices to the show include Kenan Thompson, Bobby Lee and Chris Parnell.

What's going on here? There's obviously some kind of talent pipeline from "SNL" to the show, which recently premiered a week of new episodes. Adam and David Rudman, co-creators of "Nature Cat" alongside Todd Hannert, are the producers who seemed most keen to pluck their cast from the show's roster. Moynihan remembers them asking for opinions on who could come aboard to help as voice actors, and he rattled off a number of performers from the late night staple. Killam recognized that the "brothers Rudman" were on to something.

"Part of their genius in casting from 'SNL' — [and people like] Kate Micucci [have] been a good friend of mine since before doing 'SNL' — is they sort of cast people that have a similar rhythm and tone. They come from a similar world," Killam says. "So even if we're not recording in the same room together, what we're laying down is a similar enough vibe that they meld together."

"Working with these guys in any capacity is the best," Moynihan says. "Kate Micucci is like my entertainment little sister. She was in the first movie I ever did."

For Micucci, one of the few actors who wasn't on "SNL" but knows many of the cast, it's an opportunity to work with friends.

Killam, Moynihan and Micucci have each done extensive voice work, with Moynihan and Micucci even working together on "Duck Tales." Elastic voices in comedy almost seems like a must, but for these improv champs, it's the freedom of expression that they are drawn to and excel in.

"With 'SNL' most of the time, you get one shot. That's the beauty and the beast of it. With voiceover work, and specifically with 'Nature Cat,' we're encouraged to explore and to try a lot of things and throw in ad libs. David and Adam are incredibly collaborative in that way," Killam says.

"I think it says a lot to David and Adam Rudman because they're really into improvisation," Micucci says. "Our recording sessions are always really fun and comfy."

"But we've never recorded together. Not once, I'm realizing," Moynihan says. Regardless, it was a chance for Micucci to continue a dream of hers.

"I just recently reread my journals, and I couldn't believe how many times I had in there 'I just really want to do cartoon voices,'" Micucci says. "I'm always up for whatever, but the great thing about 'Nature Cat' is that it's so earnest, and I always learn. Every time there's a new script I'm like 'No way! [Stalactites] do that?!' I'm just always being blown away by the nature part of it."

The nature part of it is key to the show's mission. The Rudmans have consultants to make sure the themes are digestible for younger viewers, and impart messages of getting out in nature and respecting it as you explore. Again, the "SNL" connection isn't the first thing you think of when pondering environmentally sound entertainment.

"Yeah. Me and Bobby are sent out to backpack into whatever terrain we're going to be covering that season. Live off the land ... No!," Killam says. "I don't think you hire Taran Killam and Bobby Moynihan from 'SNL' for their nature authenticity. We're here to be loud and entertaining and goofy."

In that vein, we asked the actors which "SNL" cast members might be best suited to make cameos on the show, and what animal would they voice?

"I'm gonna say Will Forte as an armadillo," Killam says.

"I don't think Molly Shannon has been on the show," Micucci says. "I think she could play anything, but let's see. Maybe a really fun and zippy squirrel or gopher. She has a lot of positive energy."

The show has that positive energy as well. The main characters have helped birds fly south for the winter and even built bat boxes for new friends.