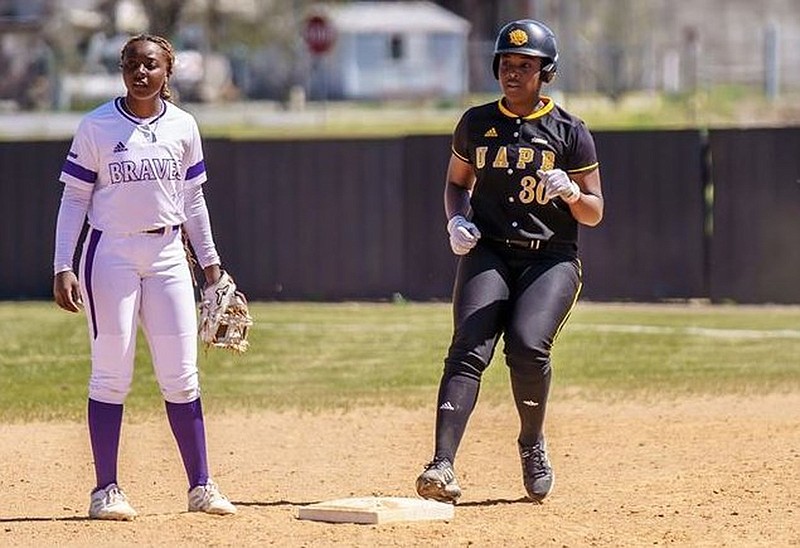 Samaria Jackson (right) is considered the most consistent player on the UAPB softball team. (Special to The Commercial/University of Arkansas at Pine Bluff)

White Hall native Samaria Jackson has all the tools – the rocket arm, the steady bat and most importantly, the tireless work ethic.

At a recent home game for her University of Arkansas at Pine Bluff Lady Lions, the usually easygoing 6-foot junior first baseman let her actions on the field speak volumes on how much she means to her team.

She tallied a total of four hits, five runs, six RBIs, and belted two home runs during UAPB's final three-game home series versus Prairie View A&M University on senior weekend. In fact, she managed to belt a home run in all three games against the Lady Panthers.

Those are the kind of performances that Jackson was known for at White Hall and has continued to produce in her collegiate career.

UAPB head coach Michael Bumpers believes the talented Jackson is well on her way to becoming one of the most talented players that he has ever coached.

"Samaria was my first signee here (at UAPB)," Bumpers said. "She is one of the best around players I have ever coached. She's inquisitive and works very hard. She's been our most consistent player all season."

As a freshman, Jackson was tied for second in the Southwestern Athletic Conference in home runs with two and ranked 15th in the in batting with a .345 average. Jackson had season-high totals against the University of North Texas with a two-run home run, with two RBIs, and one run.

This season, Jackson again put-up excellent numbers all season to prove she belongs among the elite players in the conference with her selection to the All-SWAC First Team.

Jackson has been tabbed as one of the best hitters in the SWAC, ranking second in the conference in home runs with nine, fourth in on-base slugging percentage (1.129), seventh in batting average (.367), 10th in hits with 40, and 16th in RBI with 21.

Jackson has also turned heads on the defensive side. She ranked sixth in the SWAC with a fielding percentage of 0.989 and committed only three errors in 45 games.

Although the Lady Lions languished at the bottom of the SWAC standings and failed to qualify for the conference tournament, it hasn't deterred the team-first Jackson at all.

"It was a little discouraging because we work extremely hard at practice but being leader means that you continue to come out and give it your best every day no matter what," Jackson said.

For White Hall softball fans, Jackson's leadership skills were nothing new because they had seen it all before.

Lady Bulldogs Coach Mark Akins also had no problem singing the praises of his former pupil.

"The fact that you even mentioned (Sam's) name brings a huge grin to my face," Akins said. "I will remember her not only for what she did on the field here but more importantly how she treated everyone. When you first meet her, you will probably think basketball player, but she is a phenomenal softball player. She has great footwork around the bag, she swings a big bat and always has that big smile on her face."

"Every time we went to state, it felt like a reward for all the hard work that we put in," Jackson said. "But then it was a little bittersweet because it was the last time that most of us would play together. The community really loves softball and really support their team."

Even though she has traded in the red-and-black of the Lady Bulldogs for the green-and-gold of UAPB – she remains the same happy-go-lucky leader she has always been.

"I am usually the one who hosts all the team bonding functions." said Jackson. "We sometimes do games, karaoke and sometimes we even do rap battles."

She spurned offers from Williams Baptist University and a junior college school in Illinois to remain close to home.

"UAPB was really the only choice for me because I wanted to get a good education and be able to play closer to home." Jackson said. "Everything just felt right when I came here for my visit, and I love the atmosphere of being at an HBCU."

Jackson's decision to play closer to home came as welcoming news to her mother, who is her most ardent supporter.

"My mother has been my biggest fan since I was 8 years old when she was driving me all around the state for tournaments and practices. She is usually the team mom on every team I have played on. She treats all my teammates like they were her own."

But unfortunately, when Samaria smacked her first collegiate home run as a freshman – it came in Louisiana against North Texas instead of the friendly confines of Torii Hunter Softball Complex.

"I just tried to go up to the place and try not to do too much and just relax," said Jackson. "The pitcher gave me a good pitch and I hit it pretty well."

As focused as Jackson is on the field, she has her playful side as well.

"We had a slip-and-slide at the field one time and I was one of the main people sliding down it and having fun," Jackson said. "It was a great way to end the season."

As smooth as she is on the softball diamond, if she decided to become the next J. Cole – her favorite rapper – there's a pretty good chance that she would be one of the best before long, based on her tireless desire and will, according to Bumpers.

"People in the conference already knew how good she was last year but this year her average was higher, and she has worked extremely hard to be even better," he said.