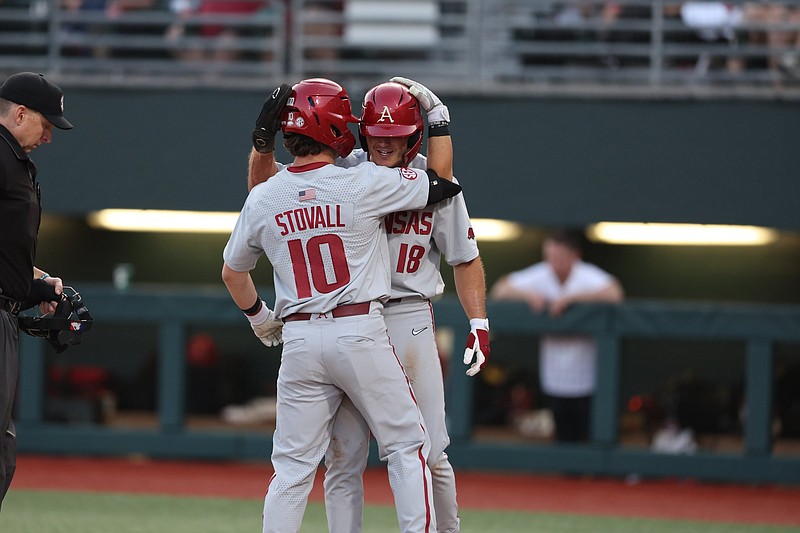 Arkansas’ Peyton Stovall (10) and teammate Chris Lanzilli celebrate after Stovall’s two-run home run in the fifth inning during the Razorbacks’ victory over Alabama on Thursday night in Tuscaloosa, Ala. (Alabama Athletics Photography)

Then came a big fifth inning that lifted the University of Arkansas to a 7-3 victory over the Crimson Tide at Thomas-Sewell Stadium in Tuscaloosa, Ala.

The No. 5 Razorbacks (38-14, 18-10 SEC) broke through with five runs in the fifth inning to overcome a 3-0 Alabama lead and got five scoreless innings from their bullpen to finish the game.

All seven of Arkansas' runs came with two outs.

The Razorbacks had gone 12 innings without scoring and had two hits in that span going back to last weekend's series against Vanderbilt when they lost to the Commodores 5-0 in the seven-inning finale after not scoring in the eighth inning of an 11-6 Arkansas victory.

"We had a real good pregame [batting practice] and hit well yesterday. There was a lot of focus."

Arkansas clinched a first-round bye in the SEC Tournament, where the Razorbacks' open in Hoover, Ala., will be Wednesday when double-elimination play begins. Texas A&M defeated Ole Miss 10-5 on Thursday to remain tied with the Razorbacks at 18-10 in the SEC West.

"Well, that's good," Van Horn said. "It's hard to finish in the top four. It's nice to know that we'll go to Hoover and play two games.

"We win a game, we get to play another. Win a couple of them ... Just play baseball this time of year.

"I tell the guys, this should be your favorite time of year. You don't have to worry about getting up, taking a test, studying. You can just play baseball focused in, get your sleep, lift. Let's see how long we can play."

McMillan retired the first 12 batters he faced before the Razorbacks got to him in the fifth inning.

Chris Lanzilli hit a lead-off single, but it looked like he might be stranded when McMillian got Brady Slavens and Braydon Webb on flyouts.

Peyton Stovall -- who had missed the previous eight games because of an injury on his right middle finger -- then worked the count to 3-1 and hit a two-run home run to pull the Razorbacks within 3-2.

"The wind was blowing in from right, and it just kind of fought through the wind," Van Horn said of Stovall's home run. "He hit it hard and it got out of there pretty easy."

Jalen Battles followed with a single, stole second base and Zach Gregory walked.

Cayden Wallace then hit a three-run home run to give Arkansas a 5-3 lead.

"A really good at-bat by Gregory," Van Horn said. "We were just hoping that he would somehow find a way to get on base so Wallace would get to hit.

"Sure enough, Wallace put a really good swing on a fastball in and, I mean, he crushed it. All of a sudden we're up two. The game just flipped."

Alabama Coach Brad Bohannon said he wasn't sure what happened to McMillan in the fifth inning.

"I don't know if he left the ball over the plate or they just put some good swings on it," Bohannon said. "That was the difference in the game for sure."

'They were great," Van Horn said. "They just really did a good job. They've really done a good job all year."

Tygart came into the game with one out in the eighth inning and Andrew Pinckney on second base after a double and Tommy Seidel representing the tying run at the plate.

Seidel and Owen Diodati then struck out swinging.

Caden Rose drew a leadoff walk for the Tide in the ninth, but Tygart got the next three batters to earn his eighth save. Taylor improved to 5-0.

Arkansas pushed its lead to 7-3 in the ninth inning on a two-out, two-run double by Battles after a double by Brady Slavens and a walk to Braydon Webb.

"What a relief when that ball headed to the gap," Van Horn said. "It took a lot of pressure off the team and Brady out there."

Alabama took a 2-0 lead with two runs in the third inning on an RBI double by Seidel and RBI single by Rose.

Van Horn made a change in the pitching rotation for the first time in an SEC series.

Will McEntire, who had done well as a mid-week starter and in relief against Auburn and Vanderbilt the previous two weeks, started Thursday night with Connor Noland being moved to Friday night and Jaxon Wiggins to Saturday.

"We just felt like this would be a good time to let the 18-year-old have a little time away from starting," Van Horn said on Arkansas' pregame radio show. "Give him a little extra rest, but still have him get in his work this weekend. Then he'll be ready to pitch next week."

Van Horn said the plan is to have Smith make one relief appearance against Alabama, then be ready to start in the SEC Tournament.

McEntire went 4 innings and allowed 8 hits and 2 walks, but held the Tide to 3 runs and had 4 strikeouts.

"Credit to him for hanging in there," Van Horn said. "He fought it."

NO. 5 ARKANSAS AT ALABAMA

WHERE Sewell-Thomas Stadium, Tuscaloosa, Ala.

SHORT HOPS Arkansas clinched a firstround bye in the SEC Tournament. The Razorback will open in Hoover, Ala., on Wednesday when double-elimination play begins after four single-elimination games on Tuesday … The Razorbacks have won at least 18 SEC SEC games for the fourth consecutive season … Arkansas improved to 46-49 all-time against Alabama and 17-25 in Tuscaloosa … The Razorbacks went 7-3 in SEC series openers this season.