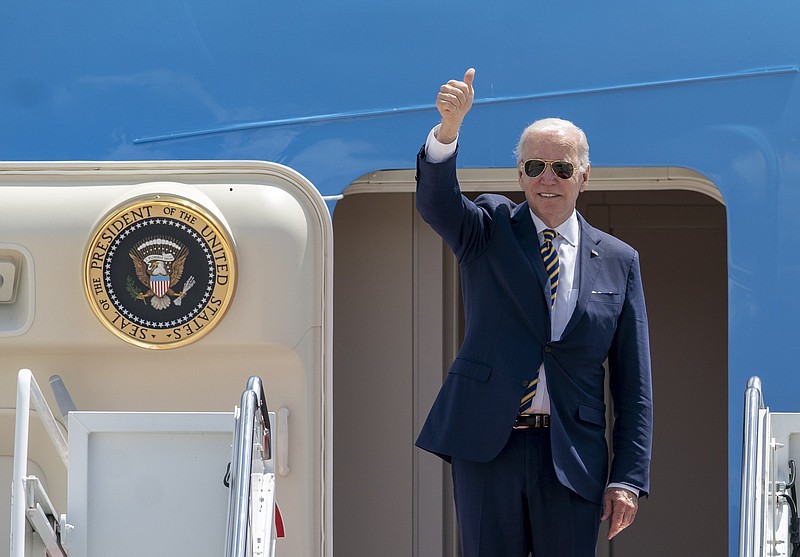 President Joe Biden gestures as he boards Air Force One for a trip to South Korea and Japan, Thursday at Andrews Air Force Base, Md. Video at arkansasonline.com/520bidenasia/. (AP/Gemunu Amarasinghe)

WASHINGTON -- President Joe Biden embarked Thursday on a six-day trip to South Korea and Japan aiming to build rapport with the two nations' leaders while also sending a message to China: Russia's faltering invasion of Ukraine should give Beijing pause about its own saber-rattling in the Pacific.

Biden's visit was set to include meetings with newly elected South Korean President Yoon Suk Yeol and Japanese Prime Minister Fumio Kishida. They planned for their talks to touch on trade, increasing resilience in the global supply chain, growing concerns about North Korea's nuclear program and the spread of covid-19 in that country.

While in Japan, Biden will also meet with fellow leaders of the Indo-Pacific strategic alliance known as the Quad, a group that includes Australia, India and Japan.

The U.S. under Biden has forged a united front with democratic allies that has combined their economic heft to put Russia under sanctions for its invasion of Ukraine. That alliance includes South Korea and Japan. But even as Biden is to be feted by Yoon at a state dinner and hold intimate conversations with Kishida, the U.S. president knows those relationships need to be deepened if they're to serve as a counterweight to China's ambitions.

White House national security adviser Jake Sullivan said the trip would "show in living color the United States can at once lead the free world in responding to Russia's war in Ukraine, and that at the same time chart a course for effective, principled American leadership and engagement in a region that will define much of the future of the 21st century."

The war in eastern Europe has created a sense of urgency about China among major U.S. allies in the Pacific.

"America's alliances in Europe and in Asia keep us -- and I would argue the world -- strong and secure," Biden said. "They're how we confront the challenges of our time, and deliver for our people today, and harness opportunities for a better tomorrow."

China's military assertiveness has grown over the course of Biden's presidency, with its actions frequently putting the region on edge.

Last month, China held military drills around Taiwan after a group of U.S. lawmakers arrived for talks on the self-governed island. Late last year China stepped up sorties into Taiwan's air space. Taiwan considers itself a sovereign state, but Beijing views Taiwan as a breakaway province and has not ruled out the use of force to achieve unification.

Japan has reported frequent intrusions by China's military vessels into Japanese territorial waters around the Senkaku Islands in the East China Sea. The uninhabited islets are controlled by Japan but claimed by China, which calls them Diaoyu.

"What arouses attention and vigilance is the fact that, even before the American leader has set out for the meeting, the so-called joint Japan-U.S. anti-China rhetoric is already kicking up dust," Wang said, according to China's Foreign Ministry.

Meanwhile, South Korea could tilt closer to the U.S. under Yoon, who took office earlier this month. The new South Korean president has criticized his predecessor as "subservient" to China by seeking to balance the relationships with Washington and Beijing. To neutralize North Korea's nuclear threats, Yoon has pledged to seek a stronger U.S. security commitment.

The Biden administration has warned China against assisting Russia in its war with Ukraine. In March, the U.S. informed Asian and European allies that American intelligence determined that China had signaled to Russia a willingness to provide military support and financial backing to reduce the blow of severe sanctions imposed by the U.S. and its allies.

Biden administration officials say that the Russian invasion has been a clarifying moment for some of the bigger powers in Asia as financial sanctions and export bans have been put in place to check Russia.

U.S. Ambassador Rahm Emanuel, Biden's top envoy to Japan, said the Japanese have stood out by rallying eight of 10 members of the Association of Southeast Nations to back a U.N. vote against the Russian invasion.

Biden, who is making his first presidential trip to Asia, met Kishida briefly on the sidelines of a U.N. climate conference last year shortly after the Japanese prime minister took office. He has yet to meet with Yoon face-to-face.

Information for this article was contributed by Chris Megerian of The Associated Press.