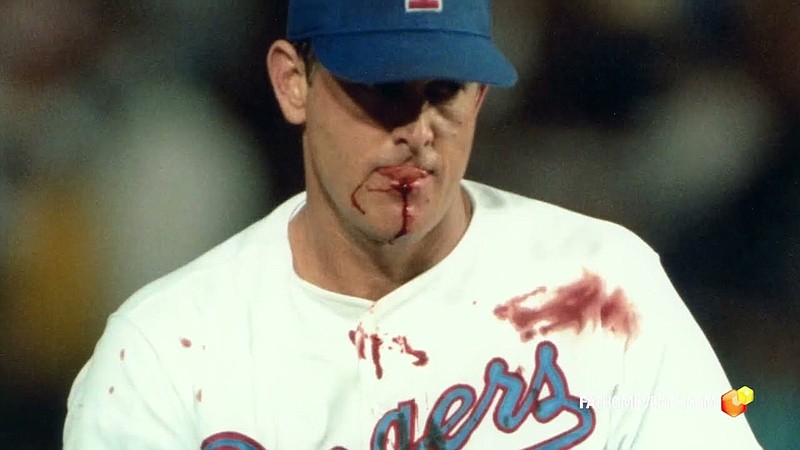 In the second inning of a Sept. 8, 1990, game between the Texas Rangers and the Kansas City Royals, designated hitter Bo Jackson of the Royals smacked a sharp one-hopper back that deflected off pitcher Nolan Ryan’s glove and hit him in the face, opening a two-inch gash in his lower lip that required six stitches to close after the game. Ryan threw Jackson out and stayed in the game, leaving in the eighth inning with a 1-0 lead. This is just a minor episode in “Facing Nolan,” a documentary about the legend.

Growing up as a kid and a baseball lover in the 1980s, it was hard not to know the name Nolan Ryan. That's especially true for a young fan of the Texas Rangers, the team where the first-ballot Hall of Fame pitcher spent his final five years. It was during those later years (1989 to 1993) that I really came to appreciate what an incredible (and in many ways unprecedented) 27-year career he had. The new documentary "Facing Nolan" brought many of those memories flooding back.

Nolan Ryan was an intimidating presence on the mound, with a 100 mph+ heater that he amazingly maintained for his entire career (his last fastball, thrown at age 46 and with a torn ligament in his elbow, was recorded at 98 mph). Armed with heat and a knee-buckling 12-6 curveball, Nolan set a total of 51 Major League live-ball era records including some that will never be broken, such as his seven no-hitters and his 5,714 career strikeouts.

He was also known to be "conveniently wild." That occasional wildness led him to be the all-time leader in walks (by a pretty large margin). It also struck fear into opposing batters and Ryan used that to his advantage. Slugger Dale Murphy said of Nolan, "he's the only pitcher you start thinking about two days before you face him." Reggie Jackson said Nolan "was the only guy that could put fear in me. Not because he could get me out, but because he could kill me. You just hoped to mix in a walk so you could have a good night and go 0-3."

Statistically you could say Nolan Ryan's heyday was his amazing run with the then California Angels from 1972 till 1979. During that span he pitched well over 200 innings every year but once (over 300 innings twice). Five of those years he pitched over 20 complete games (a nearly forgotten statistic these days). He struck out over 300 batters five times including 383 in 1973.

But that's not to brush aside his nine years spent with the Houston Astros throughout the 1980s and his final five years in Arlington with the Texas Rangers. While perhaps not as showy on paper as the first half of his career, what Nolan was able to do well into his 40s is mind-blowing.

"Facing Nolan" hits on all of those career highlights while also stressing the family man he was (and still is) beyond the stardom. And as the title suggests, the film includes interviews with several former players, many of whom played against him -- Pete Rose, George Brett, Cal Ripken Jr., Dave Winfield, Bobby Grich and Randy Johnson. We also hear from teammates like Rod Carew, Craig Biggio, Art Howe, Kevin Bass, Terry Puhl, Pudge Rodriguez, and Bobby Witt, who share what it was like to play with "Big Tex."

Written and directed by Bradley Jackson, "Facing Nolan" uses the down-home coffee shop narration of Mike MacRae to escort us through this improbable life starting in Alvin, Texas. It's there that a tall slender kid with a big country drawl and an even bigger arm first picked up a baseball. He would eventually attract the attention of a scout for the New York Mets and they soon signed him to a $7,000-a-year contract. Nolan's plan was to try and play at least four years in baseball, just enough to receive a pension. After that he would come back home to be a veterinarian. But as history tells us, that plan changed dramatically.

During his time playing for the Mets, Nolan married his high school sweetheart, Ruth Holdorff. The movie puts a big emphasis on their relationship, stressing how crucial Ruth's support was to Nolan's career. As she describes it, "People say when you marry a baseball player you really marry baseball." While listening to the players is great (especially for baseball diehards like me), some of the film's best bits come from Jackson's interviews with Nolan and Ruth. And watching the couple with their children and grandchildren offers a fresh perspective on one of the game's most intense pitchers.

But of course, it's the old baseball stories that will excite fans most. Stories about his time in New York and the eventual trade that sent him to the West Coast to play for the Angels. Stories about his time in Houston where he became the first sports athlete to make $1 million per season. And stories of his time with the Texas Rangers in what normally would have been the waning years of a career. Instead Nolan's legend only grew. There he earned his 5,000th strikeout, his 300th win, and pitched his sixth and seventh no-hitter. Oh, and there was that thing known as the Robin Ventura Incident on Aug. 4, 1993.

"Facing Nolan" does a great job blending the personal with the professional to give us a well-rounded portrait of one of baseball's greatest and often undervalued pitchers. The film should be catnip for fans of the game, especially those (like me) who enjoy sitting back and listening to former big leaguers share old stories. It highlights key moments in Nolan's career, debunks a few myths along the way, and shines a light on the husband, father, and grandfather beyond the mound.