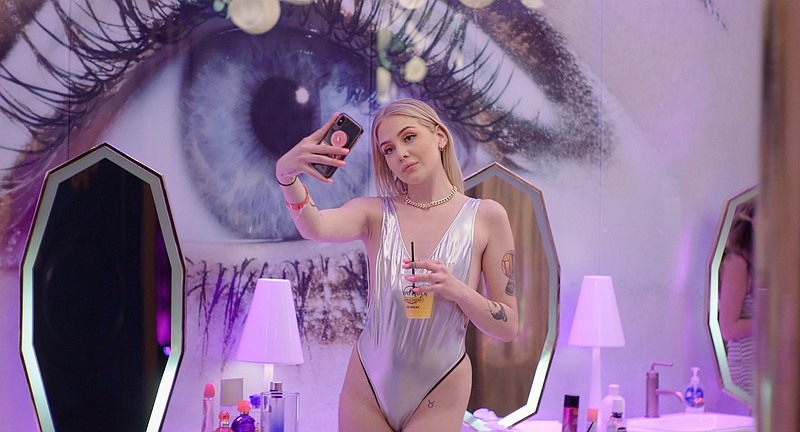 Swedish filmmaker Ninja Thyberg's debut feature occupies a curious place between documentary deconstruction and a kind of Hollywood story about an underdog who comes to town determined to make it in a male-dominated industry that dehumanizes its work force as it produces product calibrated for the male gaze. One could receive it as a post-feminist critique of workplace power dynamics.

In more basic terms, it's the story of Linnea (Kappel), a tattooed 19-year-old Swedish woman who has come to Los Angles to make her fortune as an adult film star. She has brought along an alter ego, "Bella Cherry," and a staggering amount of acumen for one so inexperienced. As Bella she feeds an Instagram account with teasing selfies. She has secured an agent and living arrangements -- a room in a "model house" (sometimes called a "porn dorm") in the San Fernando Valley, which -- as anyone who has seen "Boogie Nights" might know -- is the center of adult filmmaking. Linnea is wised-up and hard-nosed, she has come to the Valley to get experience, to start grinding away on her 10,000 hours. She understands she needs to acquire a particular set of skills, something that sets her apart from all the other girls with dreams.

But we don't really know all that much about her. She seems sex positive and all, but her parents back home in Sweden think she's gone to L.A. for an internship. She's not quite as cool and calculating or as wised-up as she seems.

The film starts with Linnea/Bella on what's presumably her first job, a $900 gig. Her producer films her as she produces her driver's license and a copy of the day's newspaper -- proof she's of age -- and answers questions about whether she's under the influence and aware of what's about to go down. He pointedly films her signing a copy of the contract.

Then she's brought onto set -- a flatly lit, cheaply furnished apartment -- to meet her co-star. The storyline is that this dad-bodded stevedore (or whatever) holding a camera to capture his point-of-view (to better serve as a surrogate for "the guy at home") is going to relieve the angel-faced Bella of her virginity. Before the moment of truth, she goes off to the bathroom to prepare. There's a moment when she leans forward on the sink and gazes into the mirror, and we can see something like doubt swim up in her eyes before she steels herself and commits to her new life.

It's the first, but hardly the last extraordinary moment Kappel provides us.

Still, she needs a little pep talk before the scene can commence; and so a kindly member of the crew suggests she use her stage fright -- that what the scene needs is a little of her wariness and innocence. So she's a method actress!

Of course, you always have the option of not looking, and this early scene will likely serve as an early off-ramp for some viewers.

If you make it through that first scene, you'll likely find "Pleasure" an interesting exploration of female agency in a field that, given its apparent popularity, is strangely mysterious to a lot of us. Thyberg may not reveal much about which side of the pornography debate she comes down upon, but it's clear that she's a fan of her protagonist and she wants us to empathize with -- Bella.

It's not hard. Kappel, in her first film role, demonstrates both astonishing courage and a supple intelligence. She's the real deal and while it's probably politically incorrect for me to worry that she might somehow be stigmatized by her work in this movie, I have to admit I am. She's not a porn performer, but when I first heard about the movie -- it was shot in 2018, pre-covid-19 -- and was featured at Cannes in 2020, I got the impression that she was, and this role was her attempt to transition to mainstream movies a la Sasha Grey, Traci Lords and Sylvester Stallone.