Valley View after final 4A title 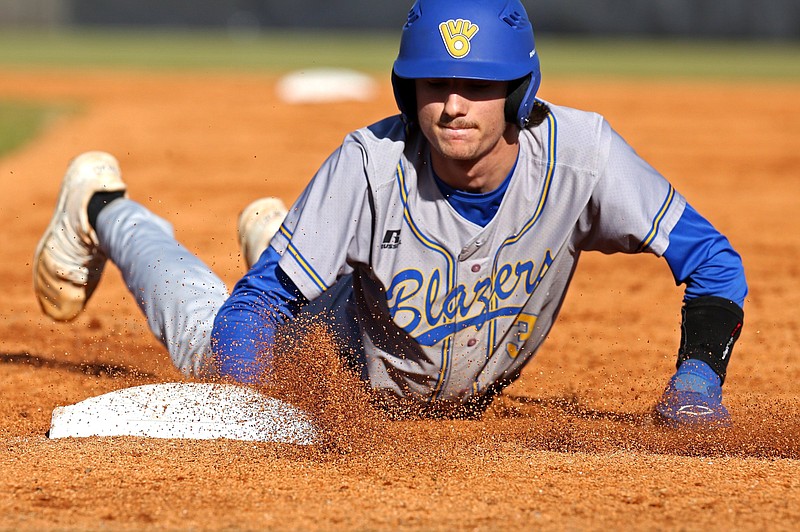 Grayson Becker and the Valley View Blazers will look to win their final Class 4A state championship today when they take on Harrison at the Benton Athletic Complex. Valley View will move up to Class 5A next season. (Arkansas Democrat-Gazette/Colin Murphey)

There will be plenty of blue and gold around the Benton Athletic Complex today, and Valley View baseball Coach Josh Allison wouldn't have it any other way.

Not only will his Blazers be looking to win a Class 4A state title for the second year in a row, the Lady Blazers will be playing in both the softball and girls soccer finals.

Not a bad way for a school to make a lasting impression on the rest of its class before it makes the move up to Class 5A next season.

"It's big," Allison said. "You go into the season, and you hope to have a team make it to the finals that you can support. To have three of them play in it, it says a lot about our kids, our athletes, our coaches, the administration, support for our community. ... it's all of that stuff. It's a pretty neat deal, especially with all three of us playing on the same day.

"We're excited for softball and the soccer, and we're excited about our opportunity, too."

The opportunity the Blazers are getting has happened just one other time in school history. Valley View (29-6) won back-to-back state championships in 2008-09, and it'd love nothing more than to do it again in what'll be its final year in Class 4A.

The Blazers zipped past Magnolia 8-1 in the championship game last season after scoring six runs over the final two innings. Allison isn't banking on that late rush happening again, but he wouldn't at all mind it if it equates to the program's fourth title.

With high-scoring Harrison standing on the other side of the field, Allison knows run support with be critical.

Harrison (21-12) is coming off a game in which it outgunned Huntsville 17-11 in the semifinals on Saturday. The Goblins have plenty of home-run power and a wealth of arms at their disposal, which could make life tough on the defending state champions.

"They're a good team," Allison said of Harrison. "They hit the ball really, really well, and they can score a lot of runs. And those runs have come against good opponents. So we know we've got to throw it well, defend well, do everything well to win it.

"But if we had a strength, that'd be it. Throwing it well and playing clean baseball is something we've did a good job of doing for the most part. Now obviously when we don't, just like any team, it's hard to win."

Victories for Valley View have come in waves this season. The Blazers won 15 of their first 17 games. They've also won eight of their last nine, with their 9-1 win over Shiloh Christian catapulting them back into the championship round.

Preston Watlington had an impressive pitching outing in the semifinal while a bevy of others, led by sophomore Slade Caldwell, have provided ample hitting.

The Mississippi commit is batting .511 with 9 home runs and 48 RBI. He delivered a grand slam in a first-round win over Farmington in a game the Blazers trailed 3-2 in the bottom of the fifth inning.

"The guys have just answered the bell from day one," Allison said. "If we had a bad game, whether it was hitting or pitching, they always responded. Nothing was like 'oh, it's the end of the world'. We didn't play well against Marion, we didn't play well against Jonesboro when they beat us. When we don't do the things we were suppose to do, the kids find a way to bounce back.

"That was kind of the key against Farmington. We got hit in the mouth there in that fifth inning when we got behind. We were able to answer, get their starter out of the game and kind of take off from there."

Harrison had its. way in three state tournament games by outscoring Star City, Pulaski Academy and Huntsville by a combined 35-20. The Goblins, who exhibited an abundance of patience at the plate in each of their postseason games, got home runs from Beck Jones in their opener and in the semifinal but also showed a knack for ripping off hit after hit during sustained rallies.

Those momentum-generating turns are something that Allison said his team has to keep from happening. But's with what the Blazers have done thus far, he's confident they have one top-notch game left in them before they bolt to a higher classification.

"I told the guys after the semifinal game just how proud I was of them," Allison said. "It's not easy having that target on your back all season, and people talking about you being the reigning state champion. It's easy to fall into that trap, but the guys buckled down and got threw some tough games all year."

to finish off the job

One of Nashville’s rallying cries this season was to simply play in one more game that what it did last year.

That motto isn’t terrible at all, especially when the Scrapperettes finished a game short of reaching the title game 12 months ago

“One of the biggest factors in helping us reach our No. 1 goal has to be the schedule we played,” said Nashville Coach Boomer Brown, who’ll lead his team into the Class 4A softball state championship game today against Valley View. “We have played three different state finalists for a total of six games. Playing our conference was a gauntlet at the top. We have reached our goal now, and we hope we can put it together for one more great outing against another quality opponent.”

Nashville (27-4) will certainly be battle-tested going in. The Scrapperettes have faced No. 1 Benton twice, Class 3A finalist Ashdown and Class 1A finalist Taylor. Those three, along with games against playoff participants Bentonville West, Rogers, Bauxite, Malvern, should help Nashville, which is looking for its first title since 2013.

Valley View (23-5) has a lofty resume of its own that should benefit from it as well. The Lady Blazers have played Greene County Tech, which will face Benton for the Class 5A title, twice and Class 6A finalist Cabot, not to mention fellow postseason mates Stuttgart, Malvern and Southside Batesville.

The similarities are endless between the two. Neither team has a problem scoring runs, both have strong pitching from their starters and both have stout hitting up and down their lineups. Those factors are certain to make for an entertaining game.

“I just hope we can keep swinging it,” Brown said.