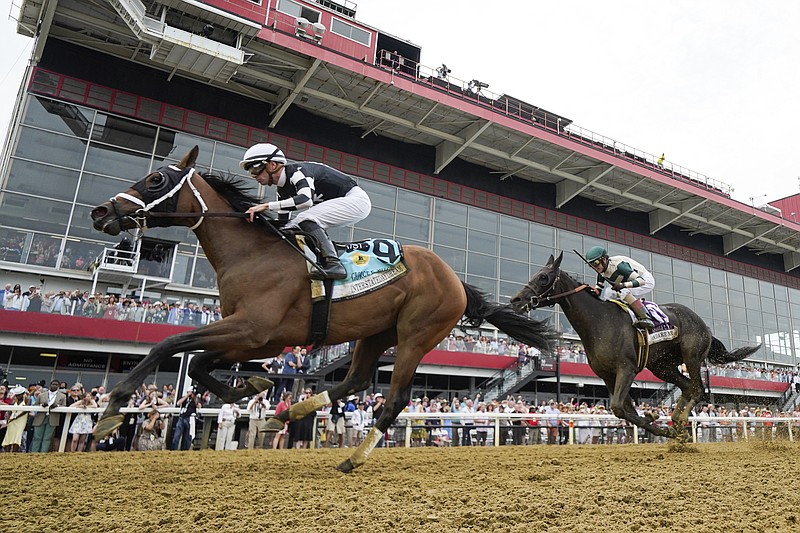 Florent Geroux, left, atop Interstatedaydream, beats out John Velazquez, atop Adare Manor, to win the 98th running of the Black-Eyed Susan at Pimlico Race Course, Friday, May 20, 2022, in Baltimore. (AP Photo/Julio Cortez)

BALTIMORE -- Interstatedaydream's owner and trainer decided to skip the Kentucky Oaks two weeks ago. That paid dividends at the Black-Eyed Susan Stakes at Pimlico Race Course on Friday.

With jockey Florent Geroux aboard, the well-rested filly was able to hold off race favorite Adare Manor down the stretch and win the $250,000 Grade 2 race by 1 ¼ lengths.

In her previous start, Interstatedaydream tired late and finished third in last month's Ashland Stakes at Keeneland in Kentucky. Geroux, who won his first Black-Eyed Susan in his fourth attempt, said he didn't ride her much differently this time but noticed she was calm throughout.

"She was very brave down the lane," Geroux said. "Very pleased with the filly how she ran today. I think the connections did right skipping the Oaks and other big races on (Kentucky) Derby weekend and train for this one. She was primed and ready."

Despite Adare Manor starting from the difficult 10 post in the 13-filly affair, many in the Pimlico crowd expected the Kentucky-bred bay to mount a challenge down the stretch. Southern California-based Adare Manor was previously trained by Bob Baffert before being turned over to Sean McCarthy. Baffert is serving a 90-day suspension by the Kentucky racing officials.

But Interstatedaydream was having none of it.

Trainer Brad Cox said he was "just very proud" of the Ontario-bred filly.

"She stepped up and ran a huge race," he said. "I was very shocked to see she was the price she was going into the gate. She wasn't getting a lot of respect, and I really thought she fit well with this group.

"It was a big effort and I thought Florent did a good job of getting a good early position. Her last two works have been phenomenal and she showed up and ran a big race." 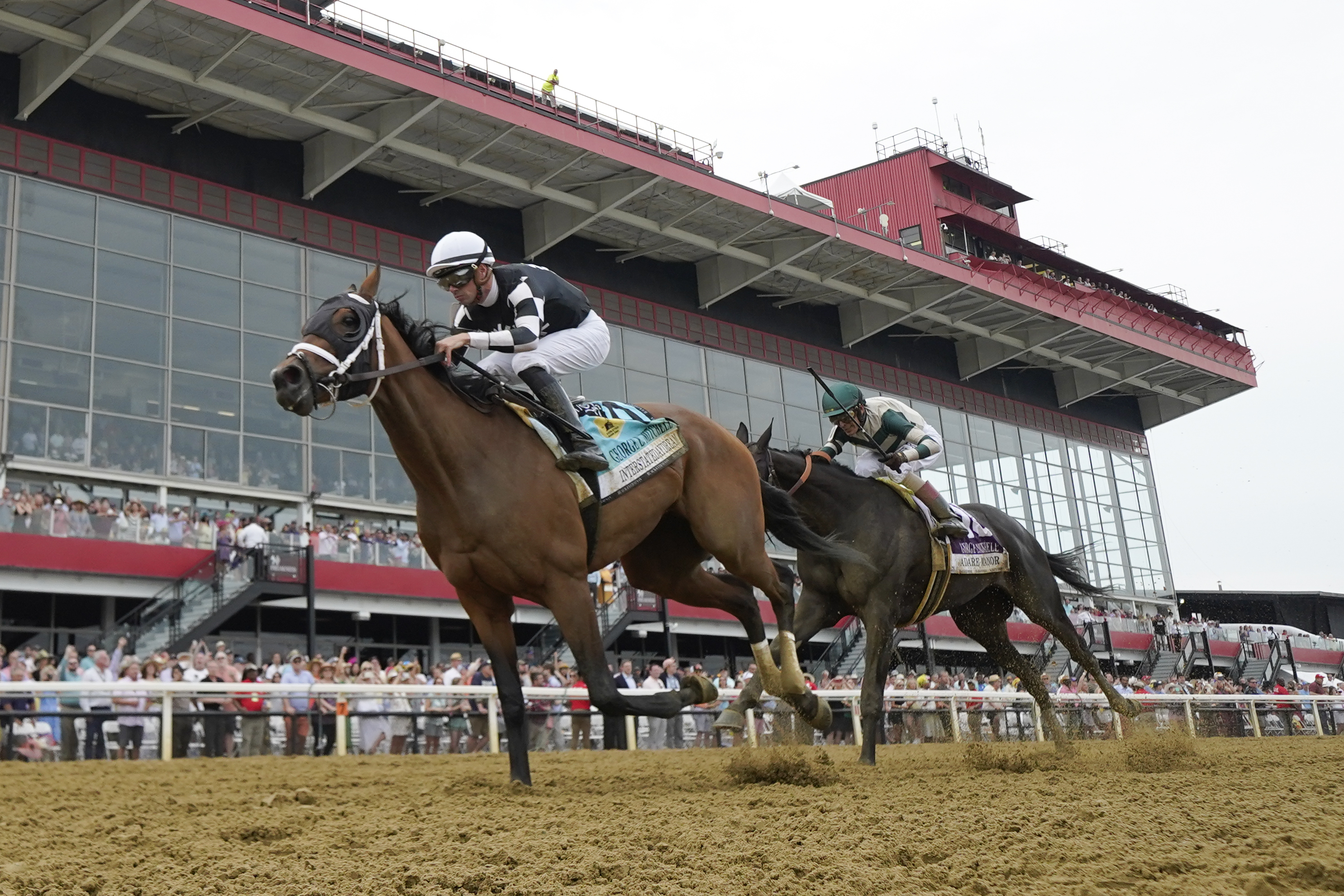 Florent Geroux, left, atop Interstatedaydream, beats out John Velazquez, atop Adare Manor, to win the 98th running of the Black-Eyed Susan at Pimlico Race Course, Friday, May 20, 2022, in Baltimore. (AP Photo/Julio Cortez) 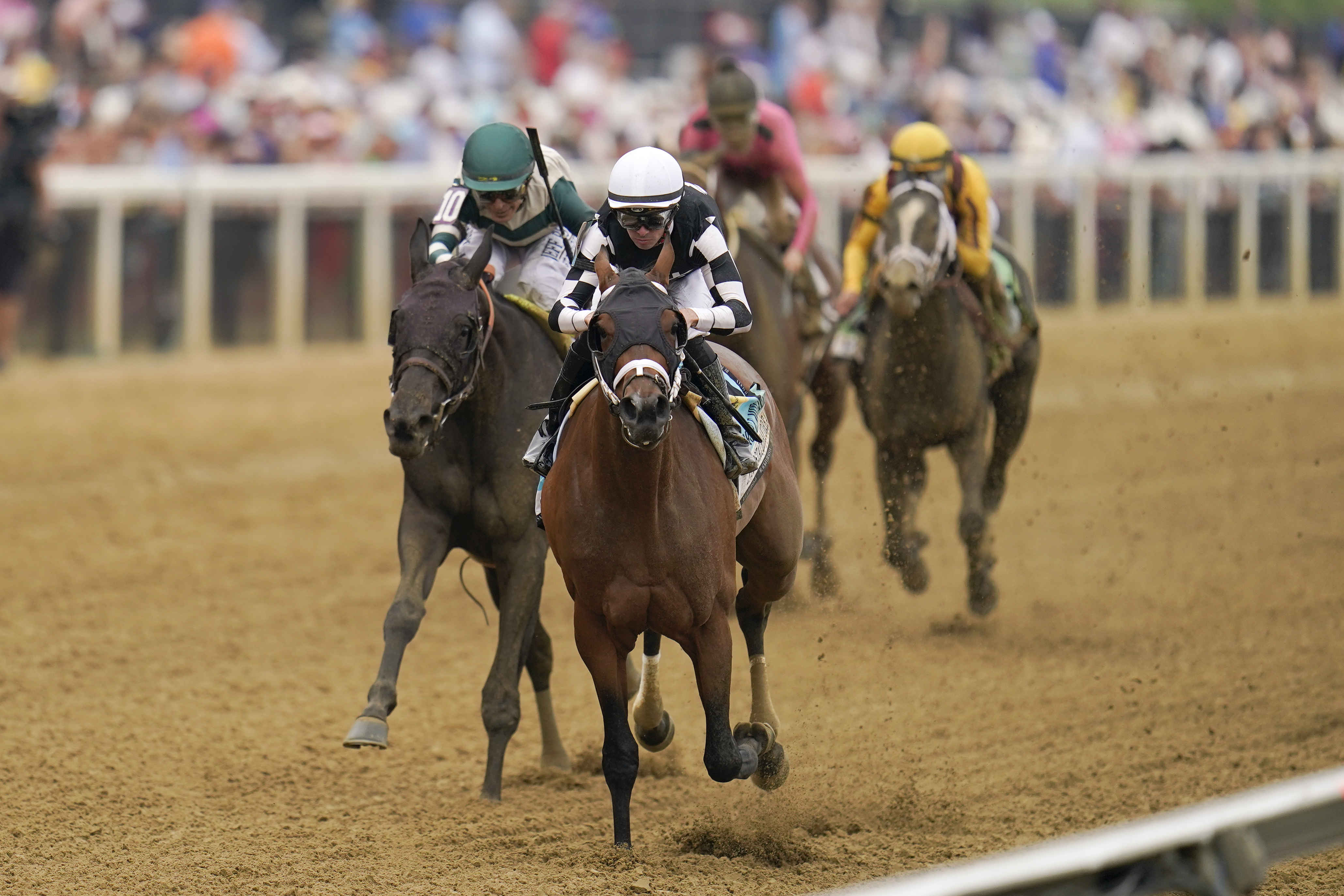