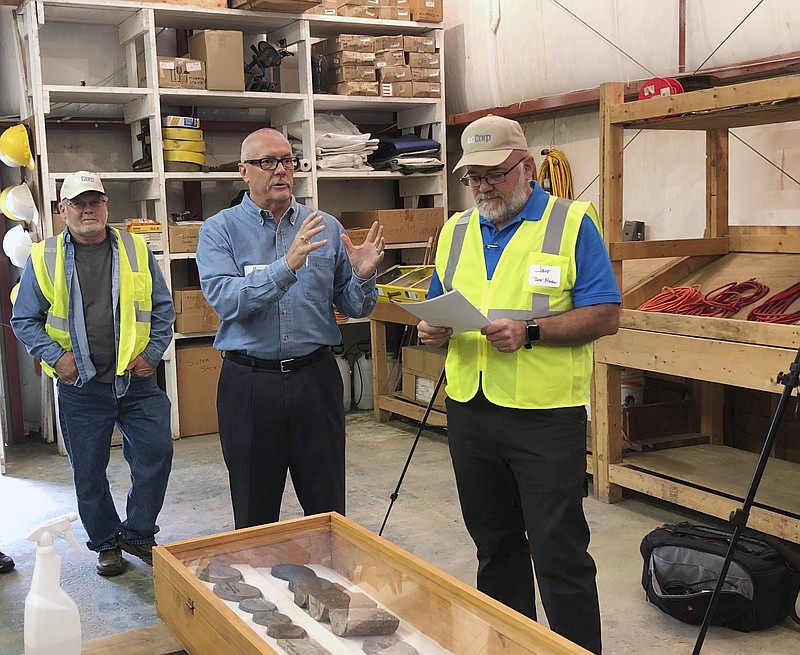 NioCorp Developments CEO Mark Smith talks to a group of investors during a tour in October 2021 about the prospects for a proposed mine the company hopes to build near Elk Creek in southeast Nebraska to extract critical minerals. (AP/Josh Funk)

OMAHA, Neb. -- The mining company that wants to extract a rare heat-resistant element from the ground under southeast Nebraska says a new report shows the deposit it plans to mine holds a significant amount of other rare elements.

NioCorp Developments said Thursday that the latest analysis shows the amount of rare earth elements present where it plans to build the mine about 80 miles south of Omaha near the town of Elk Creek is the second largest deposit in the United States.

The Centennial, Colorado-based company estimates that there are 632.9 kilotons of rare earth elements there. Those elements are needed to make the powerful magnets used in electric vehicles and other high-tech products.

But the company is still working on analyzing the latest data on the project to determine if it will be economically feasible to produce those rare earth elements along with the niobium, scandium and titanium it plans to produce at the mine. Analysts have said that economic analysis will be key.

And of course before NioCorp can produce anything, the company still has to raise more than $1 billion to cover the cost of building the mine. Since 2015, NioCorp has raised more than $60 million to pay for the exploration and development of the site.

NioCorp CEO Mark Smith said there has been strong interest from investors in the project. The company is trying to develop a financing plan with the right mix of debt and equity before it can move forward.

The U.S. imports all the niobium and scandium and most of the titanium and rare earths that NioCorp hopes to produce. There is only one American mine that produces rare earths now at a site in California. NioCorp says its deposit is second only to that Mountain Pass mine that MP Materials runs in California.