Military age limits targeted by Compiled by Democrat-Gazette Staff From Wire Reports | May 21, 2022 at 4:34 a.m. 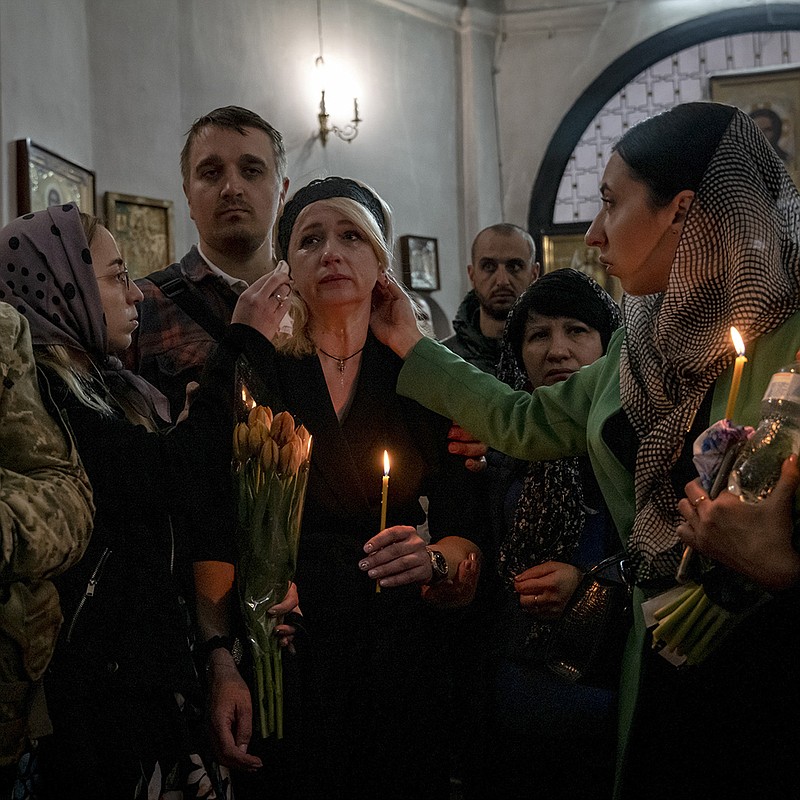 Nina Ponomarenko is comforted Friday by family members at the funeral for her son, Denys Ponomarenko, at St. Catherine’s Cathedral in Chernihiv, Ukraine. Denys Ponomarenko was a medic who was killed March 16 during shelling in Moschun. More photos at arkansasonline.com/ukrainemonth3/. (The New York Times/Nicole Tung)

Russia is moving toward eliminating age limits for military service -- an apparent effort to expand the pool of potential recruits amid heavy casualties in Ukraine.

Under an amendment introduced by senior lawmakers, Russians older than 40 would be able to sign first-time military service contracts. The law would bring in more service members with in-demand specialties, such as medical workers and engineers, a statement from the lower house of Parliament said Friday.

"Highly professional specialists are needed" to operate military equipment, the statement said, making no mention of a manpower shortage in the field.

But experts say Russia is suffering from a manpower shortage as it takes losses in Ukraine.

President Vladimir Putin has resisted putting his country on wartime footing and ordering a large-scale military draft, apparently fearing domestic backlash. Instead, the Russian military has stepped up its recruitment drive. Under the current law, Russian citizens must be ages 18-40 to sign a first-time military service contract.

The draft amendment released Friday is likely to pass Russia's rubber-stamp parliament. The bill's authors are the top lawmakers on the lower house's Defense Committee.

In another development, Russia claimed to have captured Mariupol on Friday in what would be its biggest victory yet in its war with Ukraine, after a nearly three-month siege that reduced much of the strategic port city to a smoking ruin, with more than 20,000 civilians feared dead.

Russian Defense Minister Sergei Shoigu reported to Putin the "complete liberation" of the Azovstal steel plant in Mariupol -- the last stronghold of Ukrainian resistance -- and the city as a whole, spokesman Igor Konashenkov said.

There was no immediate confirmation from Ukraine.

Russia's state news agency RIA Novosti quoted the ministry as saying a total of 2,439 Ukrainian fighters who had been holed up at the steelworks had surrendered since Monday, including more than 500 on Friday.

As they surrendered, the troops were taken prisoner by the Russians, and at least some were taken to a former penal colony. Others were said to be hospitalized.

The defense of the steel mill had been led by Ukraine's Azov Regiment, whose far-right origins have been seized on by the Kremlin as part of an effort to cast its invasion as a battle against Nazi influence in Ukraine. Russia said the Azov commander was taken away from the plant in an armored vehicle.

Russian authorities have threatened to investigate some of the steel mill's defenders for war crimes and put them on trial, branding them as "Nazis" and criminals. That has stirred international fears about their fate.

The steelworks, which sprawled across 4 square miles, had been the site of fierce fighting for weeks. The dwindling group of outgunned fighters had held out, drawing Russian airstrikes, artillery and tank fire, before their government ordered them to abandon the plant's defense and save themselves.

The complete takeover of Mariupol gives Putin a badly needed victory in the war he began on Feb. 24 -- a conflict he hoped would be a quick conquest for the Kremlin but instead has seen the failure to take the capital of Kyiv, a pullback of forces to refocus on eastern Ukraine and the sinking of the flagship of Russia's Black Sea fleet.

Military analysts said Mariupol's capture at this point is of mostly symbolic importance, since the city was already effectively under Moscow's control and most of the Russian forces that were tied down by the fighting there had already left.

Fighting raged in the Donbas on Friday, the industrial heartland in eastern Ukraine that Putin is bent on capturing.

Russian forces shelled a vital highway and kept up attacks on a key city in the Luhansk region, hitting a school among other sites, Ukrainian authorities said. Luhansk is part of the Donbas.

The Kremlin had sought control of Mariupol to complete a land corridor between Russia and the Crimean Peninsula, which it seized from Ukraine in 2014, and free up troops to join the larger battle for the Donbas. The city's loss also deprives Ukraine of a vital seaport.

Mariupol endured some of the worst suffering of the war and became a worldwide symbol of defiance. An estimated 100,000 people remained out of a prewar population of 450,000, many trapped without food, water, heat or electricity. Relentless bombardment left rows upon rows of shattered or hollowed-out buildings.

A maternity hospital was hit with a lethal Russian airstrike March 9, producing images of pregnant women being evacuated from the place. A week later, about 300 people were reported killed in the bombing of a theater where civilians were taking shelter, although the actual death toll could be closer to 600.

Satellite images in April showed what appeared to be mass graves just outside Mariupol, where local officials accused Russia of concealing the slaughter by burying up to 9,000 civilians.

Ukrainian President Volodymyr Zelenskyy said Monday that the evacuation of his forces from the miles of tunnels and bunkers beneath Azovstal was done to save the lives of the fighters.

Earlier this month, hundreds of civilians were evacuated from the plant during humanitarian cease-fires and spoke of the terror of ceaseless bombardment, the dank conditions underground and the fear that they wouldn't make it out alive.

As the end drew near at Azovstal, wives of fighters who held out at the steelworks told of what they feared would be their last contact with their husbands.

Olga Boiko, wife of a marine, wiped away tears as she said that her husband had written her on Thursday: "Hello. We surrender, I don't know when I will get in touch with you and if I will at all. Love you. Kiss you. Bye."

Natalia Zaritskaya, wife of another fighter at Azovstal, said that based on the messages she had seen over the past two days, "Now they are on the path from hell to hell. Every inch of this path is deadly."

She said that two days ago, her husband reported that of the 32 soldiers with whom he had served, only eight survived, most of them seriously wounded.

While Russia described the troops leaving the steel plant as a mass surrender, the Ukrainians called it a mission fulfilled. They said the fighters had tied down Moscow's forces and hindered their bid to seize the east.

Mykhailo Podolyak, an adviser to Zelenskyy, described the defense of Mariupol as "the Thermopylae of the 21st century" -- a reference to one of history's most glorious defeats, in which 300 Spartans held off a much larger Persian force in 480 B.C. before finally succumbing.

Outside of Mariupol, the war continues on both the diplomatic front and the battlefront.

Zelenskyy said Russia should be made to pay for every home, school, hospital and business it destroys. He called on Ukraine's partners to seize Russian funds and property under their jurisdiction and use them to create a fund to compensate those who suffered.

Russia "would feel the true weight of every missile, every bomb, every shell that it has fired at us," he said in his nightly video address.

Serhiy Haidai, the governor of Luhansk, said Russian forces shelled the Lysychansk-Bakhmut highway from multiple directions, taking aim at the only road for evacuating people and delivering humanitarian supplies.

"The Russians are trying to cut us off from it, to encircle the Luhansk region," he said via email.

Moscow's troops have also been trying for weeks to seize Severodonetsk, a key city in the Donbas, and at least 12 people were killed there Friday, Haidai said. A school that was sheltering more than 200 people, many of them children, was hit, and more than 60 houses were destroyed across the region, he added.

But he said the Russians took losses in the attack on Severodonetsk and were forced to retreat. His account could not be independently verified.

Another city, Rubizhne, has been "completely destroyed," Haidai said. "Its fate can be compared to that of Mariupol."

In Moscow, Putin said his country has faced a barrage of cyberattacks from the West amid the invasion of Ukraine but has successfully fended them off.

Speaking Friday to members of Russia's Security Council, Putin said "the challenges in this area have become even more pressing, serious and extensive." He charged that "an outright aggression has been unleashed against Russia, a war has been waged in the information space."

Putin added that "the cyber-aggression against us, the same as the attack on Russia by sanctions in general, has failed."

He ordered officials to "perfect and enhance the mechanisms of ensuring information security at critically important industrial facilities which have a direct bearing on our country's defensive capability, and the stable development of the economic and social spheres."

Finance Minister Christian Lindner told reporters Friday that $9.5 billion of the total was mobilized at meetings of the G-7 finance ministers in Koenigswinter, Germany, this week.

He said the goal is to ensure that Ukraine's financial situation does not affect its ability to defend itself against Russia's invasion.

"We agreed on concrete actions to deepen multilateral economic cooperation and underlined our commitment to our united response to Russia's war of aggression against Ukraine and to our unwavering support to Ukraine," a G-7 statement said.

In the U.S., President Joe Biden was expected to sign a $40 billion package of military and economic aid to Ukraine and its allies.

Zelenskyy thanked the United States for the $40 billion aid package, which got final congressional approval Thursday.

"This is a demonstration of strong leadership and a necessary contribution to our common defense of freedom," Zelenskyy said in his nightly video address to the nation.

He also thanked the European Union for its support.

"And for our partners this is not just an expense or a gift. This is their contribution to security," Zelenskyy said. "For defending Ukraine also defends them from new wars and crises that Russia could provoke if it is successful in the war against Ukraine. Therefore, we must together ensure that Russia's aggression against our state has no success, not militarily, economically or any other."

Zelenskyy said Ukraine's monthly budget deficit is $5 billion "and so to survive in the war for freedom, we need quick and sufficient financial support."

The U.S. has announced a shipment of $100 million in military equipment to Ukraine, separate from what will be coming from the $40 billion approved by Congress. The latest package includes 18 more howitzers as well as anti-artillery radar systems, both of which the U.S. has provided to Ukraine already since Russia invaded Ukraine. 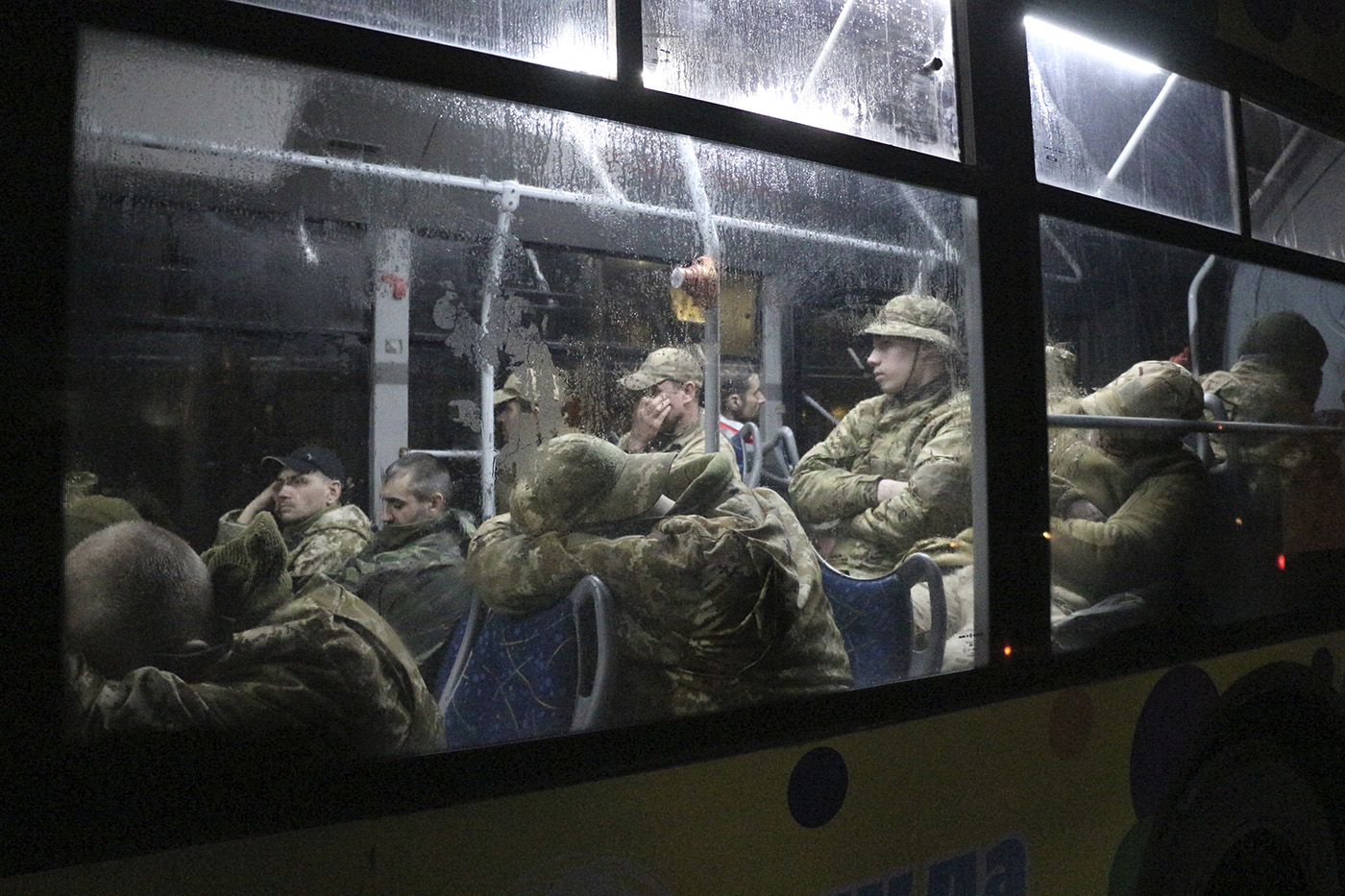 Ukrainian servicemen, riding in a bus Friday after leaving Mariupol’s Azovstal steel plant, near a penal colony in Olyonivka, in territory under the government of the Donetsk People’s Republic. (AP) 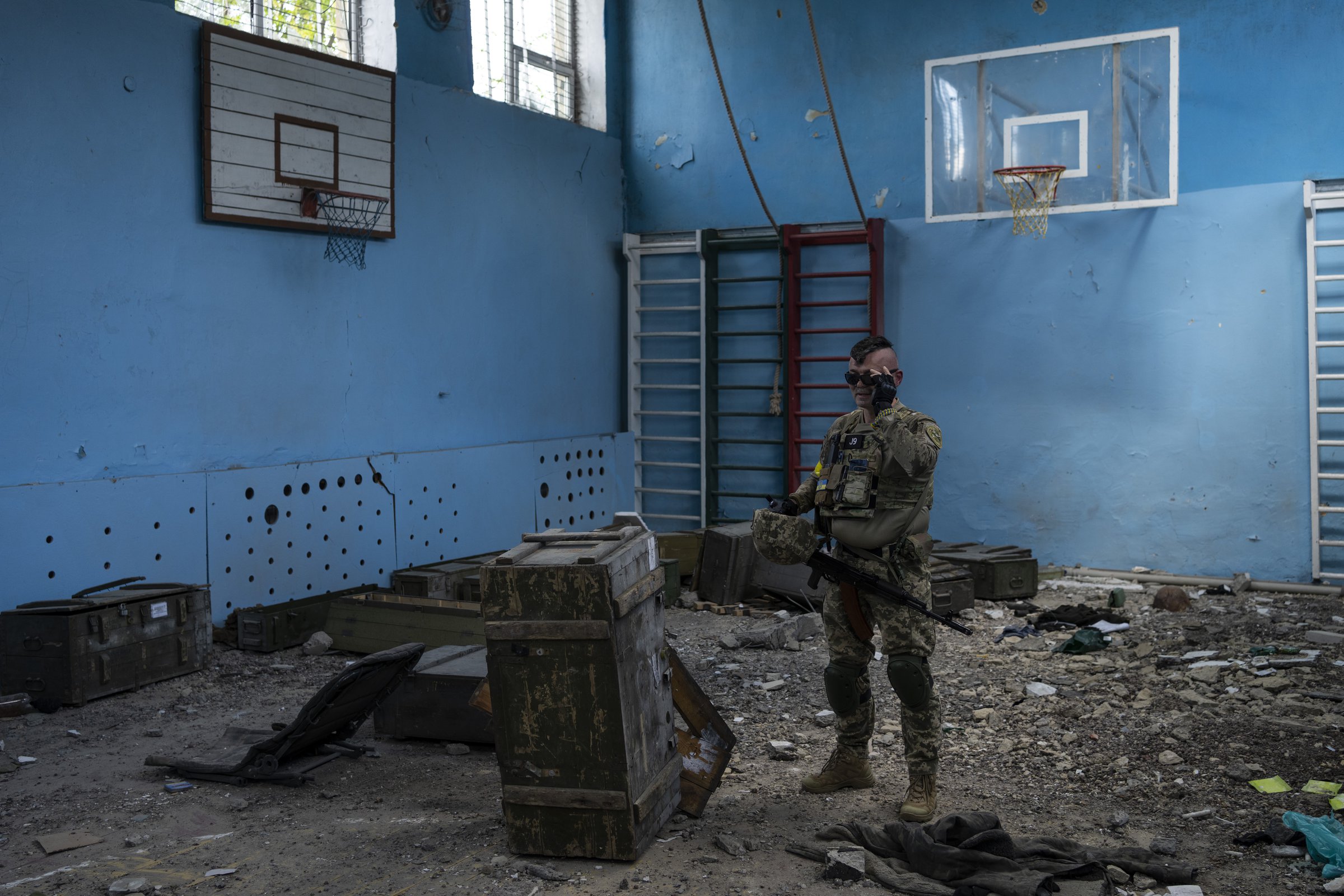 A Ukrainian serviceman inspects a school damaged during a battle between Russian and Ukrainian forces in the village of Vilkhivka on the outskirts of Kharkiv, Ukraine, on Friday. (AP/Bernat Armangue)