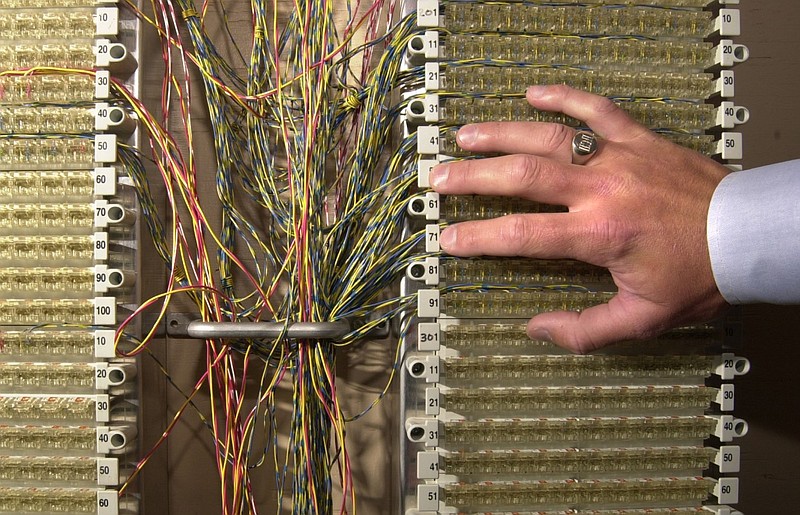 Fiber optic cable is shown inside what was then Alltel at Pinnacle Point in Rogers in this February 2003 file photo. Within a few years, Alltel would spin off its wireline business into Windstream Holdings. In 2015, Windstream spun off Uniti Group Inc. (Arkansas Democrat-Gazette file photo)

Windstream recorded $195.3 million in earnings before interest, taxes, depreciation and amortization (EBITDA) for the first quarter that ended March 31, compared with $275.5 million in the same period last year. The company, owned primarily by a private equity firm, is not obligated to report earnings publicly though it does inform investors and large customers who have a stake in Windstream's performance.

EBITDA is a financial metric used as an alternative to net income, which the company did not report. The calculation is not approved as a Generally Accepted Accounting Principle because the metrics used to calculate EBITDA can vary by company. GAAP measures such as net income are considered more accurate depictions of a company's financial performance by the Securities and Exchange Commission.

Profits were reported on total revenue of $1 billion in the quarter, down slightly from $1.1 billion in the first quarter of 2021. Revenue in the Kinetic division, the company's consumer voice and broadband service, fell to $538.7 million from $561.8 million last year. Enterprise revenue also dropped, slipping to $451.6 million, compared with $480.4 million in the first quarter of last year. Wholesale operations improved, recording revenue of $80.6 million, up from $75.6 million in 2021.

Kinetic's customer base increased by 2% to nearly 1.3 million homes in the company's 18-state service area. Most of that was delivered by increases in high-speed internet subscribers.

"Windstream delivered another strong performance in the first quarter, adding more than 31,000 fiber broadband subscribers, a record for the company; growing consumer, strategic and wholesale revenue, and maintaining one of the strongest balances sheets among U.S. telecommunications companies with ample liquidity and no near-term debt maturities," Chief Executive Officer Tony Thomas said in a statement Friday.

Windstream reported broadband customers increased to about 1.2 million in the first quarter, up from just more than 1.1 million users last year. The company says it has gained 53,300 subscribers in the past four quarters for the service, which can deliver speeds of up to 1-gigabit per second.

The company, with financial support from federal and state subsidies, has committed to a five-year, $2 billion construction initiative to expand broadband to more households across its 18-state service area.

Windstream is owned primarily by Elliott Management Corp., a New York private equity firm that purchased debt to gain control of Windstream in 2020 while the Little Rock company was entangled in Chapter 11 bankruptcy proceedings.