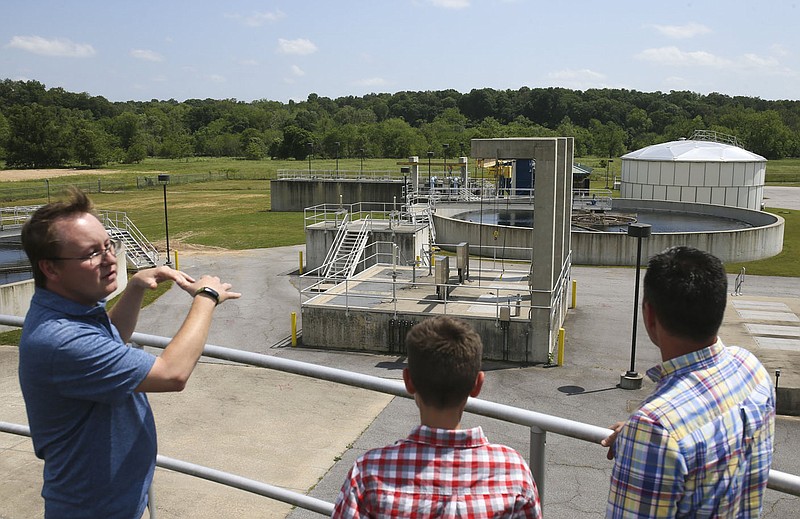 Plant Manager Mike Neil (from left) gives a tour as Nolan Burress and Tontitown Alderman Tim Burress look on, Thursday May 19, 2022 at the Northwest Arkansas Conservation Authority wastewater treatment plant in Bentonville. The Northwest Arkansas Conservation Authority is planning for an expansion of its wastewater treatment plant. Officials heard and discussed plans about the expansion. Check out nwaonline.com/220520Daily/ and nwadg.com/photos for a photo gallery. (NWA Democrat-Gazette/Charlie Kaijo)

Wastewater treatment permits issued to the Northwest Arkansas Conservation Authority and Springdale Water Utilities have led to a lawsuit between the state and the Environmental Protection Agency and revived a decadeslong fight over phosphorus in the Illinois River.

Springdale's new permit allows its treatment plant to release phosphorus at a monthly average of 1.0 milligrams per liter, according to Heath Ward, executive director of Springdale Water Utilities.

The EPA wants a level 10 times lower, or a monthly average of 0.1 milligrams per liter.

The Springdale plant releases treated water into Spring Creek, which is a tributary of the Illinois River.

The Conservation Authority's plant in south Bentonville treats wastewater from Bentonville, Elm Springs and Tontitown. It also has contracted with Cave Springs to treat its wastewater, but first the city must lay a pipe to the plant.

The authority plans to double its capacity. The state permit raises its allowable phosphorus limit to 0.35 milligrams once the expansion is complete and Cave Springs has tied onto the system, said Mike Neil, plant manager.

The authority releases treated wastewater into Osage Creek, which flows into the Illinois River.

The EPA said both plants should be limited to releasing 0.1 milligrams of phosphorus per liter of water and threatened to take over the permitting of the two plants.

The Arkansas agency filed a lawsuit April 21 against the EPA, claiming an infringement on its authority. The suit was filed with the eastern district of U.S. District Court in Little Rock. The EPA filed its objections well after a deadline for comment, the lawsuit says. The federal agency contends those permits were drafts.

The Environmental Protection Agency declined comment for this story, based on continued litigation.

The state Division of Environmental Quality also declined comment about the lawsuit, but said it followed federal procedures for issuing the permits.

The federal agency said its objections came after considering comments from an Oklahoma-based environmental group, Save the Illinois River, and the Oklahoma Department of Environmental Quality.

The Oklahoma Department of Environmental Quality in January withdrew its objections.

"The agency senior leadership was surprised to see that EPA referenced comments made by Oklahoma DEQ," the Jan. 12 email from the Oklahoma department said. "After researching the matter, it was determined that a program manager submitted the comments without properly vetting them through the appropriate internal process."

Congress in 1972 authorized states to issue permits for wastewater treatment under the National Pollutant Discharge Elimination System of the Clean Water Act. The Environmental Protection Agency authorized the Arkansas Department of Water Quality to administer and enforce Arkansas' permit program on Nov. 1, 1986.

The EPA retains oversight and reviews the state's new permits before they're awarded. The federal agency may object to the permit and can assume authority over that permit if the state fails to address the concerns.

Objections must be made in writing within 90 days of the EPA receiving a copy of the proposed permit, the lawsuit reads. The federal agency sent letters of objection in September, December and January -- 245 days, 338 days and 360 days after the deadline, the lawsuit notes.

The Arkansas lawsuit asks the court to grant an injunction to keep the EPA from overriding the permits.

"This case is about EPA' s failure to timely exercise its oversight responsibilities, EPA ignoring those failures and attempting to insert itself into a completed permitting process for two communities that rely on transparent, fair and timely administration of federal and state regulatory authority," the lawsuit reads.

"The Division of Environmental Quality properly issued these permits to protect the Illinois River Watershed and allow for growth in our Northwest Arkansas communities in an environmentally sound manner," reads a May 4 statement from the state division.

"EPA failed to take appropriate actions in a timely manner and is attempting to invalidate both permits without a legal basis," the statement continued.

Oklahoma declared the Illinois a protected scenic river in 1977. Disputes arose between Arkansas and Oklahoma when researchers found that cloudiness in the river and Lake Tenkiller was caused by a rise in phosphorus levels. The phosphorus feeds undesired algae, causing the murk. Oklahoma uses Lake Tenkiller as a source of drinking water.

This was the most visible of phosphorus' undesired effects, which included risks to fish and wildlife in the river. Oklahoma's efforts to impose phosphorus standards on Arkansas wastewater treatment plants went all the way to the U.S. Supreme Court in 1992. The court ruled in Oklahoma's favor.

Disputes between the two states did not stop. Oklahoma sued several Arkansas poultry companies in 2005, claiming they were releasing large amounts of phosphorus into the local wastewater treatment systems, and, eventually the river. As of Monday, the federal courts had not issued a ruling in the case.

The population growth of Northwest Arkansas created a need for expansion of both plants, Neil and Ward said. But the planned expansions don't include additional treatment for phosphorus.

Neil said his staff would need to add additional and expensive chemicals to lower the phosphorus level in its treated wastewater. The authority's wastewater treatment plant Friday morning was releasing 0.1 milligrams of phosphorus per liter of treated water.

The plant releases about 3.6 million gallons of treated wastewater per day, he said. Its average phosphorus release for 2021 was 0.088 milligrams per liter.

If the plant was allowed a higher phosphorus limit, that money could be removed from the amounts the plant charges the member cities for treatment, he said.

The plant saw more than the peak during heavy rainfall May 5, Neil said.

The utility has hired engineers to determine the best way to reduce the phosphorus, Ward said.

She said the plant can't meet the level sought by the EPA in its current state. It would require upgrades to its filtration system that aren't included in the expansions plans, Ward said.

“Why is there phosphorous in Arkansas waterways and why should you care?

We talk to an expert about that in the Know the News podcast.